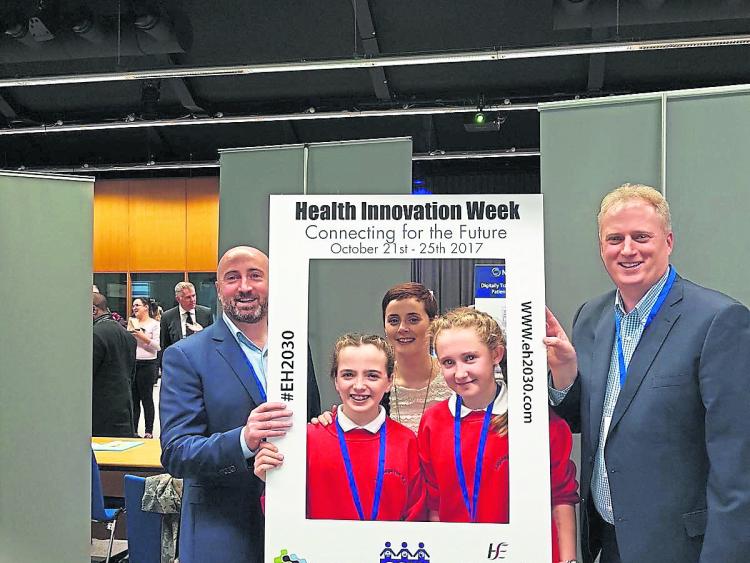 Children today are no strangers to the perks and benefits of smartphones, and that was certainly proven recently by the pupils of Aughnagarron NS.

Extra-curricular activities always go down well with young people so, when 5th and 6th class teacher Breda Kennedy decided to teach her class the basics of sign language, the kids were very enthusiastic.

Another such extra-curricular activity is the eHealth Digital Native project, which saw the children in the class set about designing an array of apps, tools and machines that they felt would benefit the medical world or enhance the life of people that may otherwise find day-to-day activities challenging.

And with so many incredible ideas and innovations, it was no wonder that two students stood out in the eyes of the judges.

Michaela O'Reilly and Kathlyn McGuire, both in 6th class and both aged 12, suggested inventing an app that would allow the hearing impaired to communicate with hearing people.

The use of an app, the girls decided, would encourage a wider population to become familiar with sign language and become aware of some of the difficulties that deaf people may encounter in their everyday lives.

And, with numerous features such as sign-speech translation, vibration alert for various household alarms, sign language games and even a setting that picks up on the beat in music and vibrates to allow the phone's owner to dance, to name a few, they're certainly onto something.
The girls were ecstatic when their project was chosen as one of the top three in the country.

The whole class was invited up to Print Works in Dublin Castle where the girls would present their idea to the judges.

On the day, the girls were teamed up with two mentors, brothers Keith and Colin MacHale who are experts in the field of digital technology.

The mentors listened carefully to the girls' app idea and to a presentation that they had worked on in school for the week leading up to the awards.
They were really impressed by the idea and were blown away with all the features that an app like this would include.

And it was good news for Aughnagarron as the girls were announced the overall national winners in the primary school category.

The girls won a Samsung Visual Reality Experience day for the entire school, a 360-degree camera and an Xbox One along with educational games for the school.

“This was a fantastic competition and gave all the children in our class the chance to design an object that would change the lives of others,” said Ms Kennedy.

“We are especially proud of Kathlyn and Michaela and we would be delighted to see SignApp up and running in the future!”