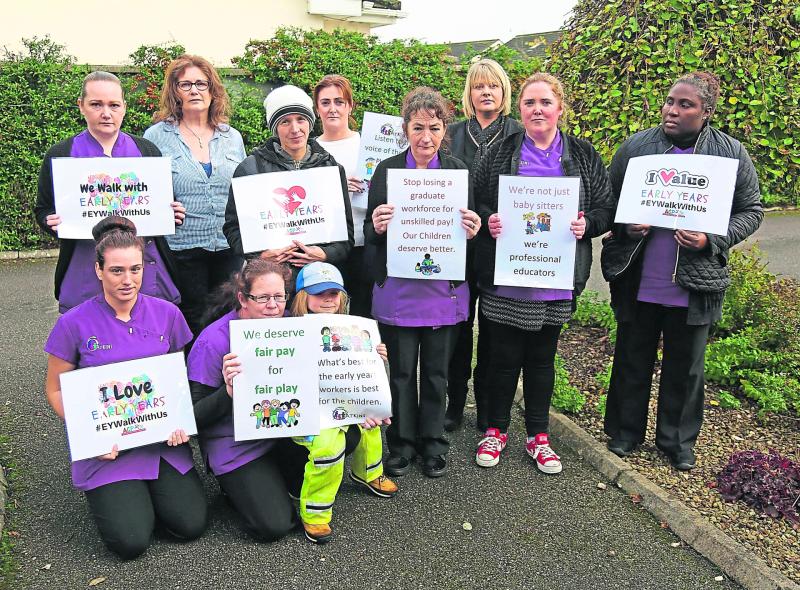 A lack of government investment and low pay levels is forcing a growing number of childcare workers across Longford and the wider region to live in “consistent poverty,” it was claimed this week.

Childcare Professionals up and down the country held a national day of protest last Friday to demonstrate their anger at the modest salaries affecting front line workers.

Longford Women’s Link’s Childcare Service, Catkins Nursery was among those, as staff supported by management held a 'symbolic walkout' to highlight the impasse.

The campaign, orchestrated by the Association of Childhood Professionals (ACP), saw workers brandishing placards as they exited the Longford facility at lunchtime and in the process forego an afternoon's pay.

“We have both gone to college for several years and I have done five years and have an honours degree,” said assistant manager Una Mulvihill as proceedings came to a close.

“We do childcare for the love of it and for the passion of the job.

“We don’t do it for the money.

“The way things are at the minute it's just not sustainable though.

“We just don’t get the recognition for the qualifications we have.”

She too, pulled little punches in delivering her own assessment of the financial challenges childcare workers face as a consequence of limited rates of pay.

“Early education is very important and there are different stakeholders in it such as children, parents and workers,” she explained.

“We deliver the programmes on behalf of the Government and we are forgotten in all of this.

“Our pay and working conditions are not adequate for what we are doing.

“It’s not even about the profession. We are on the margins.”

Strong words thrust in the direction of Children's Minister Katherine Zappone, they were ones equally matched by CEO of Longford Women's Link Louise Lovett.

She warned those holding the public purse strings of possible future closures, similar to the one which precipated the dissolution of Little Einsteins/MacEoin Park Community Childcare over 18 months ago.

“Currently the average wage of a childcare professional who have at least their Level 6 and may have an honours degree in childcare is €11.12c (per hour),” she said.

“There is a danger of closures. We already have a situation in MacEoin Park.

“That is because the funding model there is just not sustainable. There are additional supports required in an area like that but there is a national approach to providing childcare is a one size fits all and it actually doesn’t work.

“There are other facilities right around the county and country who are facing significant sustainability issues and there isn’t anybody waiting in the wings to provide that so what do these children do?”

Among those to join in solidarity with workers last Friday were local councillors Mae Sexton and Micheal Carrigy.

The Fine Gael general election candidate for Longford said despite recent additional funding being made available to the sector, rank and file staff were still not reaping those benefits.

“It’s a highly skilled area for people to be working in and they need to be properly renumerated for it,” he said.

Cllr Carrigy vowed to carry the feelings on display in Longford last week to the doors of both Ms Zappone and Taoiseach Leo Varadkar over the coming days.