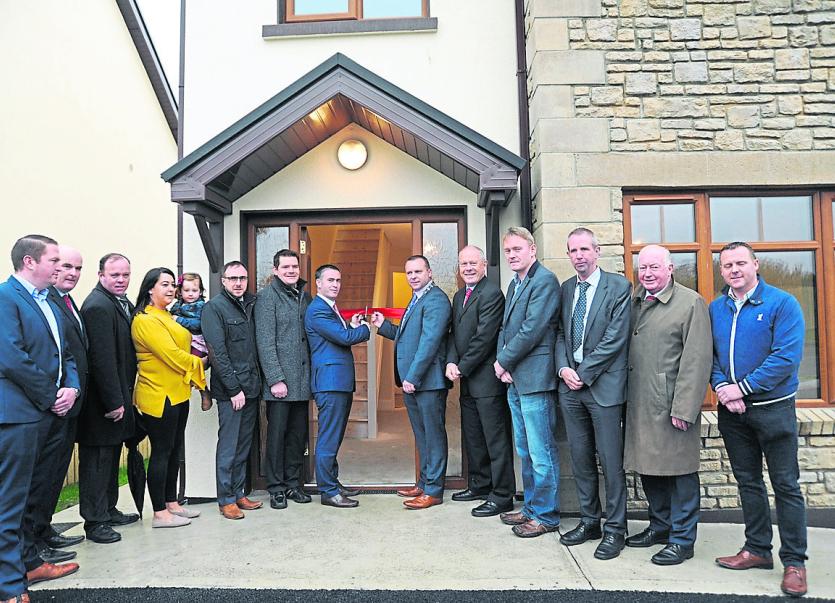 Minister of State Damien English, flanked by local politicians and dignitaries, cuts the ribbon on the opening of 14 new social houses in Drumlish on Tuesday.

Government chiefs have hailed Longford as one of the country’s principal exponents in tackling Ireland’s homelessness crisis.

The glowing appraisal was one which was delivered on Tuesday by Junior Housing Minister Damien English at the opening of a €3m social housing development in Drumlish.

Mr English said the ability to turn around 14 houses as part of a turnkey development at Mill Race Park estate inside the space of nine months bore testimony to that viewpoint.

“We were here in February and digging the sod and the target was to be here in October and here we are,” he said, in between confirming that the keys to all 14 houses had been handed over to their new tenants.

“We are very impressed in the Department (of Housing) with how Longford County Council is turning out houses and that’s down to the good work of the housing teams and councillors.

“We are asking other local authorities to see what Longford is doing and some are doing great work, others are a bit slower to catch up but every local authority has been given the money they need and the resources.”

Longford County Council Chief Executive, Paddy Mahon said this week's opening was just the latest in a long line of other projects the Council had earmarked in its own attempts to cut social housing waiting lists.

Lanesboro and Ballymahon were among those, he said, adding new build houses together with the county’s well documented regeneration model formed part of the local authority’s wider blueprint.

Cathaoirleach, Cllr Martin Mulleady reiterated much of that ebullience, saying the occasion represented a “good day” for Drumlish and for Co Longford as a whole.