New storm could cause more damage to the country 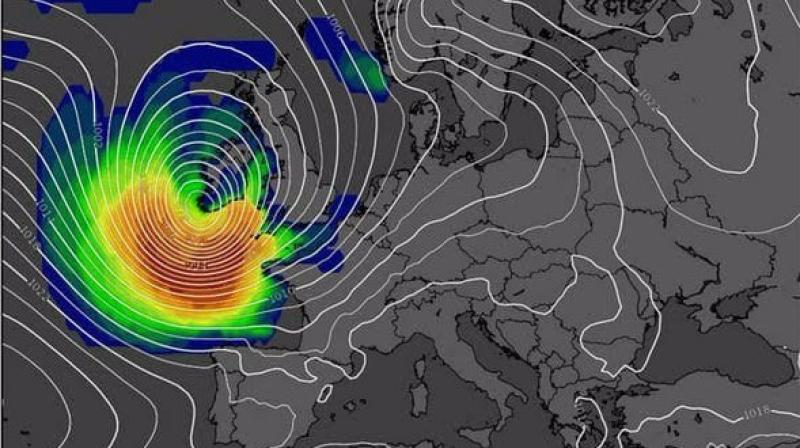 An ominous area of low pressure moves in towards Ireland

As the country comes to terms with the damage caused by #Ophelia, it's looking like she's being closely followed by a potential second storm called Storm Brian.

Storm Brian is the second in the series of UK-Irish storm-naming season, and is expected to strike this weekend - if it develops into the storm we're all expecting.

Right now, Brian is a moving depression, and Met Éireann have said that it probably won't hit Ireland anywhere near as hard as it will hit Britain.

Speaking at a briefing of the National Emergency Co-ordination Group yesterday Met Éireann meteorologist Evelyn Cusack said: “Storm Brian is the second in the series of Irish-UK storm naming season. There is evidence from our medium range models that there is a possibility of a development over the weekend, but it’s highly uncertain at this stage."

Should this depression develop into a storm, it is expected to hit on Friday, when weather will be wet and windy. Saturday and Sunday will also see a lot of heavy rain and strong winds.

Meanwhile, following this week's Storm Ophelia, crews are still clearing the destruction left in her wake.

More than 300,000 eir customers across the country were left without phone or broadband services, and crews have worked tirelessly to restore service to the majority of these, with only 50,000 homes remaining without broadband early this morning.

There are also fears, nationwide, that trees weakened by Ophelia's reign over the country will not be able to withstand the power of Storm Brian, should it hit Ireland with force this weekend.

All roads in Longford have been cleared by the county council, following a large number of fallen trees on Monday afternoon.

Met Eireann has put a Status Yellow rain warning in place for Munster, Dublin, Carlow, Kildare, Kilkenny, Louth, Wexford, Wicklow and Meath, but wet weather is to prevail in Longford too.

This afternoon will be wet countrywide with the rain turning heavy and persistent in many areas and some local flooding likely. Highest temperatures of 13 or 14 degrees.

Most of tonight will be dry and clear but as the winds die off mist and fog patches will develop with the fog thickening around dawn. Lows of 4 to 6 degrees.

The fog will clear quickly Friday morning and there will be a few bright and sunny hours. But the clouds will have thickened by midday and rain will quickly reach all parts of Leinster in the afternoon. The rain will then continue into the evening time. Highest temperatures of 12 or 13 degrees with freshening southerly winds.