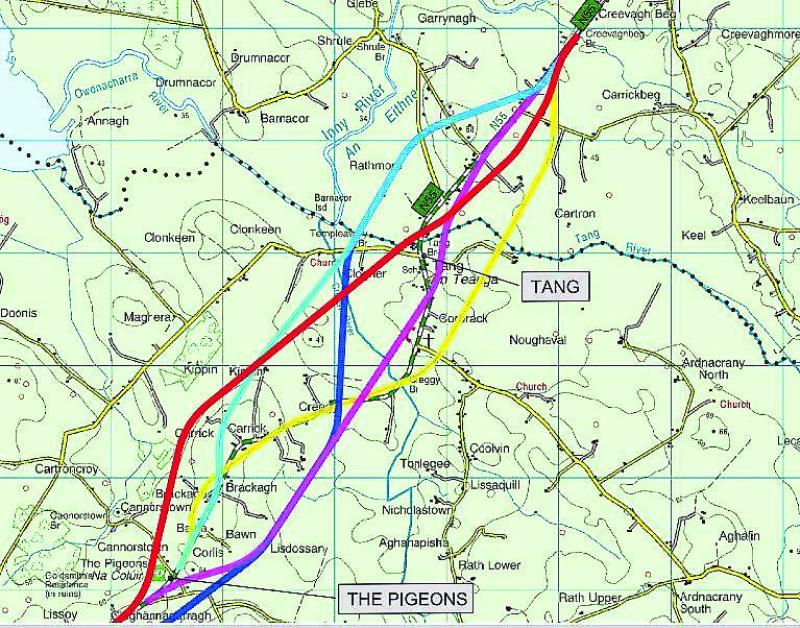 Former plans for proposed routes between Ballymahon and The Pigeons

Plans to introduce a new carriageway between Ballymahon and Athlone will not be finished in time for the planned arrival of Center Parcs in two years time.

That was the thinly veiled warning to emerge this week amid talk local authority chiefs are setting their sights on scrapping plans to realign the N55 between Ballymahon and The Pigeons by constructing an all-encompassing route corridor from the south Longford town to Athlone.

Aside from the disruption proposed roadworks would bring, the Fine Gael representative said there was every chance the development could clash with the anticipated opening of Center Parcs €233m Longford Forest in 2019.

“So, from that point it would be a worry.”

The focus on establishing a new roadway along the south Longford border has predominantly been the brainchild of Westmeath County Council.

Earlier this year, a number of public consultation forums were held with the aim of selecting a preferred route.

Those discussions threw up five possible options, something which had been greeted positively by local politicians.

“But when it was discovered there was only a two kilometre gap between the two around Tubberclair, instead of doing two jobs it was decided to do a whole new road and TII agreed to that.”

Like Cllr Farrell, the Young Fine Gael founder expressed his reservation at how the project might impact on traffic flow to and from the south Longford town.

“We feel that it (road upgrade) needs to be done as it is a dangerous road.

Cllr Ross said it was now befalling the State to ensure it keeps pace with the infrastructural work and investment made by the British based leisure giant.