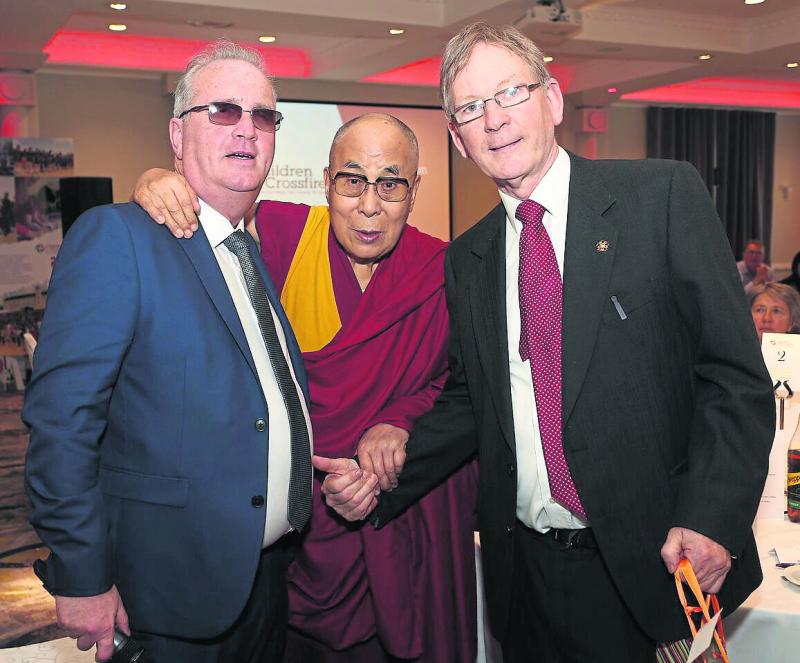 Richard Moore, the Dalai Lama and Joe Murray at a recent awards ceremony in Derry

Longford man Joe Murray was recently presented with an award by the Dalai Lama at a ceremony in Derry.

The Dalai Lama, the spiritual leader of the Tibetan people, is the patron of Children in Crossfire and was in Ireland to mark the 20th anniversary of the organisation.

Children in Crossfire was set up by inspirational Derry man Richard Moore who was blinded at the age of ten when a soldier shot a rubber bullet in his face in 1972.

Richard went on to finish school and attend University.

He became a successful businessman, musician and Chair of Derry City football club before ‘giving it all up’ to found the charity, Children in Crossfire.

He says he set up the organisation to give other children who are ‘caught in the crossfire’ of violence, war or poverty, chances and opportunities that he himself enjoyed, even as a blind person in Ireland.

He has also contacted and befriended the soldier who shot him and they work together to promote reconciliation and justice.

Richard says he was inspired to set up Children in Crossfire following his participation in events organised by Afri (Action from Ireland) with which Joe Murray has worked since 1982.

Afri works in the area of global education and awareness-raising but is probably best known for organising the annual Doolough Famine Walk in County Mayo – a walk that will be 30 years on the road in 2018.

At the Award ceremony, the Dalai Lama spoke about the need to promote global compassion and the urgent need to tackle global warming and climate change.

“We need to radically rethink our priorities if we want to preserve our wonderful planet home for our children,” he said.