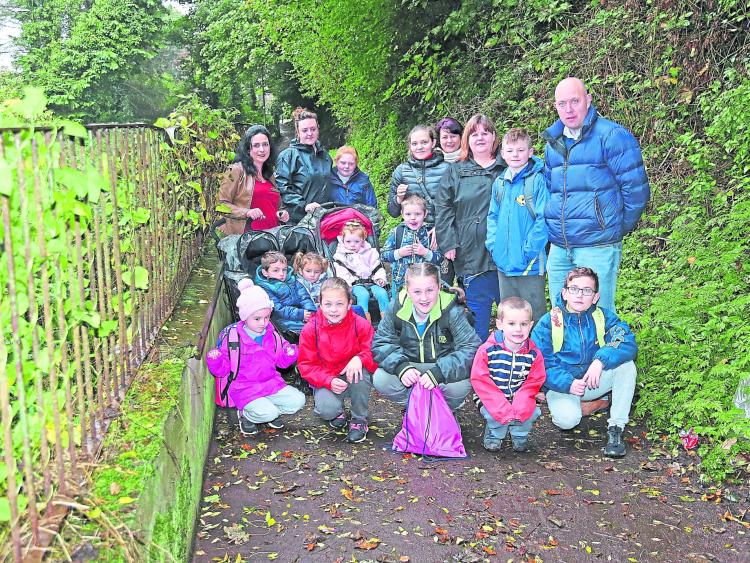 Dead rats, broken glass and other undesirable cast-offs are among a string of items found along a popular school pathway in one of Longford’s fastest growing urban centres.

Worried parents of children who attend St Mary’s National School in Edgeworthstown want local authority officials to take over the walkway which adjoins the main N55 road to Granard.

Due to the fact the route, which also saddles local estate Devine Crescent is not county council property, the local authority has been precluded from stepping in.

That hasn’t stopped a number of anxious parents from taking to Facebook over the past week to express their dismay at the situation.

Images of leaves and even dead rats taken from the walkway were published on the social media site with several ‘tagging’ local politicians in a bid to highlight the issue.

“It needs to be cleaned every couple of weeks in this weather (with) rats and all.”

Others called for urgent action to be taken in light of the imminent onset of winter.

“Something needs to be done; either clean that up or shut it off and open a new pathway for the kids to get to school,” commented another aggrieved local.

“They (pupils) do be destroyed walking to school and sitting in dirt all day.”

They were comments which sparked a sympathetic response from local Cllr Paul Ross.

In a direct response to those observations, the Legan based councillor vowed to take up the issue as a matter of urgency.

“This walk was brought to my attention by a number of parents in the last week and I have been down there and its an absolute scandal the state that it's in,” he stated.

“I have taken photos and brought it to the attention of Council engineers as it is an accident waiting to happen.”

In a follow up interview with the Leader, Cllr Ross said despite the route not currently falling under the remit of the Council, there was an overriding need to refurbish the area.

“We need to try and seek out funding for the Council to take over and upgrade it because the way it is at the minute it's a danger,” he said.

“The route is used as a shortcut to one of the busiest national schools in the county.
“It badly needs to be tidied up because it's a pure danger at the minute.”

Cllr Ross hinted at possibly opening dialogue with the local community groups ahead of making a submission for financial assistance.