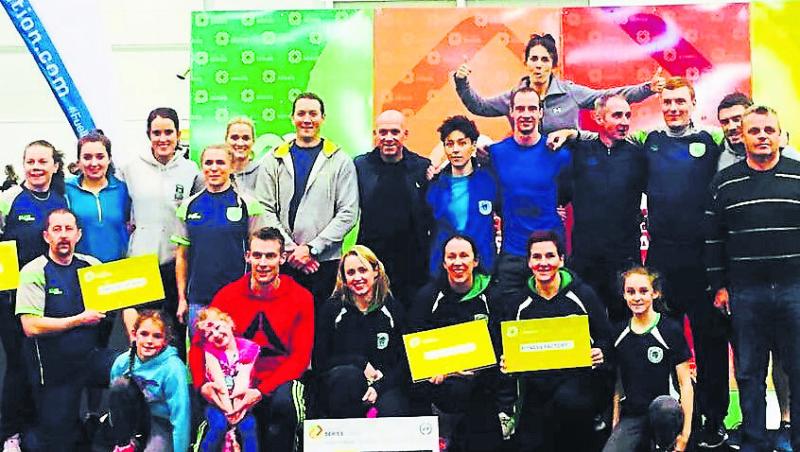 Teams from the Longford gym were placed second and third and but for a little bit more experience might well have clinched the top spot.

The Longford gym entered four teams across the three levels and found themselves competing against teams from all over Ireland.

It was a gruelling competition with each team of four expected to undertake five workouts over the course of the day in addition to a bike/relay run and then the body crunching cardio course and indoor fitness racing events.

Gym boss, Noel Murphy was part of the team that came second along with rugby ace, Colm McGlynn; Tracey Burke and Sarah Adams.

They just managed to stay ahead of local rivals and the third placed team which was made up of Luke McGuinness (former Clonguish GAA star), Mikie McGuinness, Simone Keegan and the recently wed, Nessa McElvaney.

Astonishingly a third team from the Longford gym then came fourth on the day and in fact just one point separated them from the third placed team. This team was made up of David Adams (pipped by his wife), Dermot Gill, Denise Cahill and Louise Murphy.

The fourth team then to travel from Longford to the event which was held in the National Show Centre in Swords, came a very impressive tenth and was made up of husband and wife duo, Vincent and Aisling Meldrum along with Rory Kelly and Anna Szczygiel Klimska.

Gym boss, Noel Murphy was delighted with the showing from the Co Longford competitors and said it was a great reflection on the gym which recently celebrated its first anniversary.

He told the Leader: “To have three teams ine the top four is a huge achievement for a small gym.
“All four teams put in a huge effort and trained incredibly hard for this event.

"I want to thank them for their dedication and also the family members and friends who traveled to support them on the day. I could not be prouder of this incredible bunch of people.”

The Fitness Factory gym is located at Townspark Industrial Estate in Longford town.