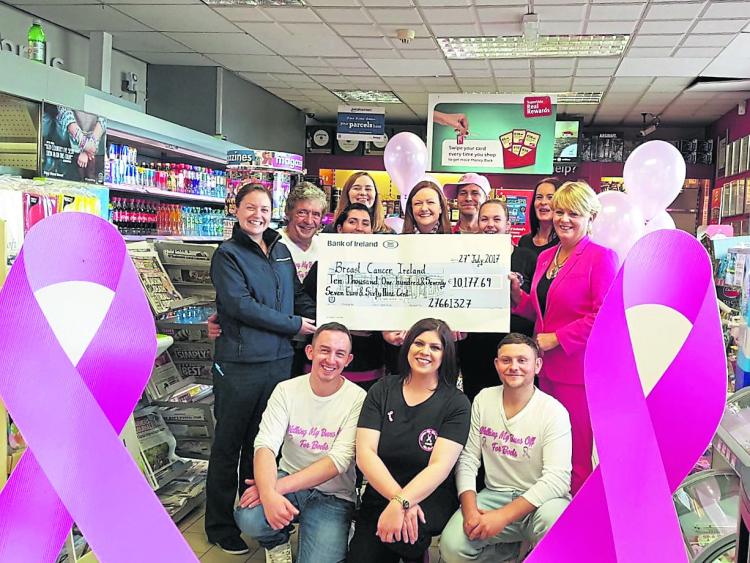 Pictured in Duffy’s SuperValu in Edgeworthstown recently were some of the staff and Ceire Duffy, as they handed over a cheque for €10,177 to Breast Cancer Ireland

Hats off to Ceire Duffy and all the team at Duffy’s SuperValu in Edgeworthstown who recently raised a very impressive €10,177 for Breast Cancer Ireland.

It was all raised as part of their ‘Walking my Buns off for Boobs’ night which was held in the Park House Hotel.

Twenty local guys, including many of the male staff, at the supermarket took to the catwalk on the night and strutted their stuff with handbags!

It was the perfect platform to showcase the bags - some new and others nearly new – and these were then auctioned off.

The fundraising idea came from the deli team at Duffy's SuperValu and together with the rest of the staff at the store, they threw themselves into the fundraiser.

The night itself was a huge success and there was a great sense of community about the occasion as the people of Edgeworthstown and beyond came out to support their endeavours.

The event was just one of a number of initiatives undertaken and supported by Duffy's SuperValu as they seek to support local groups and charity.

They were the main sponsors for the Ardagh United Mr & Mrs Competition and the Duffy's SuperValu premises on Main Street, Edgeworthstown was also the venue for a hugely successful spinathon challenge for the local GAA club.