Longford to the fore in living bog restoration project

Ardagullion Bog to the fore of €5.4m 'The Living Bog' project 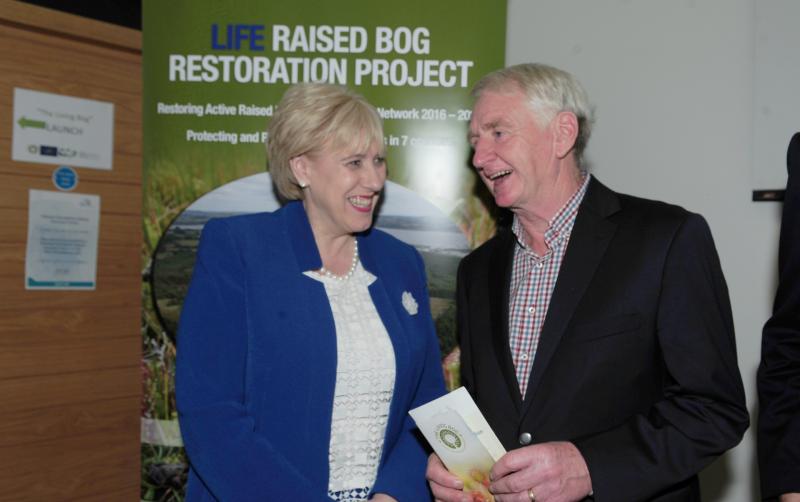 The €5.4 million ‘The Living Bog’ project was launched last Friday at Europe’s largest raised bog – Clara Bog in Offaly - by the Minister for Culture, Heritage and the Gaeltacht, Heather Humphreys TD but it was Ardagullion Bog SAC, situated just outside Edgeworthstown which attracted a lot of attention at the launch.

Minister Humphreys said from an international perspective, the raised bog at Ardagullion (and other Longford bogs) could form a key part of a ‘Peat District’ in Ireland, which would attract visitors from all over the world.

She said the preserved raised bogs of Longford and the midlands are among the worlds most important.

The Living Bog is part-funded by Minister Humphrey’s department, but the lion’s share of its €5.4 million budget comes from the European Union’s LIFE Programme for Nature and Biodiversity projects.

Ardagullion Bog SAC is a remnant of a much bigger bog which once covered the area.

Just under 10% of the original bog remains, but the north-east lobe that makes up the Special Area of Conservation is home to many of the world’s rarest plants and animals.

Local man and Ireland’s Heritage Hero of 2016 Matt Farrell of Edgeworthstown was among the big crowd at the launch.He and reps from all 12 bogs got a chance to discuss their raised bog asset and many were shocked to learn that of the Irish raised bogs mapped by Richard Lovell Edgeworth in 1810, just 1% of what remains can be classified as active, living raised bog.

This 1% is in Ireland’s Special Area of Conservation/Natura 2000 network.

The Minister hopes the 12 bog project will be the start of a major re-appreciation of Ireland’s last remaining raised bogs.

“The project, in consultation with landowners and local communities, will use active restoration measures to establish suitable conditions for peat to once again form on the bogs. I hope this project will go towards the creation of a ‘Peat District’ for Ireland – an area of raised bogs which will give visitors a chance to discover 10,000 years of history.”

At Friday's launch, Minister Humphreys announced that amenity provision is to be developed for five sites and the Living Bog team have been working with local community groups, and engaging with other government and local authorities to develop plans for amenities with the local groups.

The Living Bog team will be extending their community reach over the coming months, and will also be developing a schools programme with dozens of Longford Schools.

The project is also creating a history of Longford bogs and have urged readers who have bog memories - be they of wildlife, work and tall tales to contact them via email life@raisedbogs.ie or contact Ronan Casey at 076 1002627.

Further details on the project can be found at: www.raisedbogs.ie