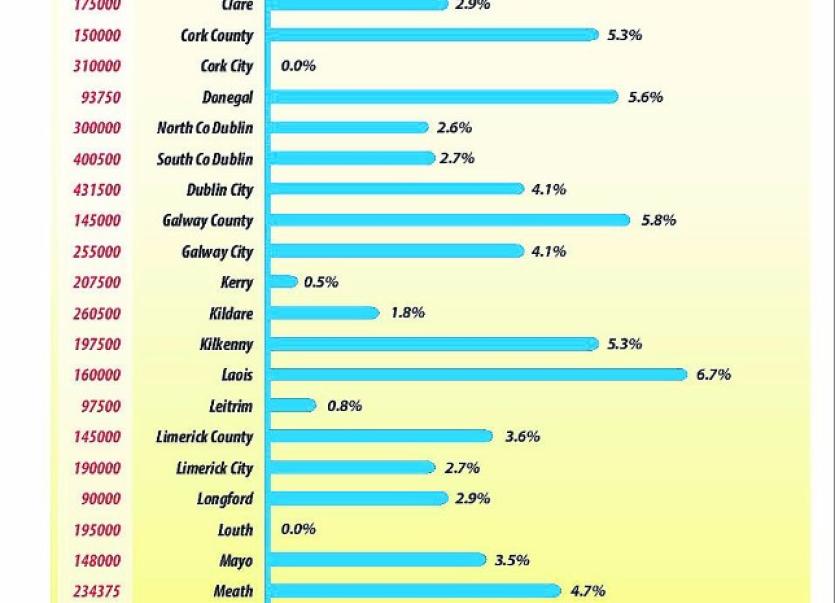 Latest figures show Longford house prices have increased by over 30%

Longford remains one the cheapest counties in Ireland to purchase a home, despite a 32.4% rise in the price of the average three-bed semi in the last year, according to a national survey carried out by Real Estate Alliance.

The price of the average three-bed semi in Longford has risen from €68,000 to €90,000 in the past year as supply of suitable housing stock has become an issue.

The REA Average House Price Survey concentrates on the actual sale price of Ireland's typical stock home, the three-bed semi, giving an up-to-date picture of the property market in towns and cities countrywide to the close of last week.

Overall, the average house price across the country has risen by 11.2% over the past 12 months – just under twice the 6% increase registered to the full year to September 2016.

The average three-bed semi-detached home in Dublin city has jumped in value by €17,000 in the three months to the end of September, and now costs €431,500.

The 4.1% rise over the last quarter means that prices in the capital’s postcode areas have increased by 15.6% over the past year, with properties selling in an average of four weeks after hitting the market.

“Supply is the main driver of these continuing price rises with our agents reporting that the volume of listings is down around the country,” said REA spokesperson Healy Hynes.

"In what is becoming a vicious circle, families looking to trade up are not seeing the larger homes becoming available while empty nesters looking to downsize do not have a ready supply of smaller homes emerging on the market.

“To complete the equation, first-time buyers are not seeing the three-bed semis coming through in sufficient numbers.”

The commuter counties continued to rebound after a relatively static 2016 and saw an increase of 2.7% this quarter, with the average house now selling for €229,300.

The country’s smaller rural towns situated outside of Dublin, the commuter belt and the major cities out-performed the national index with prices rising by an average of 2.8% over the quarter to €142,867.