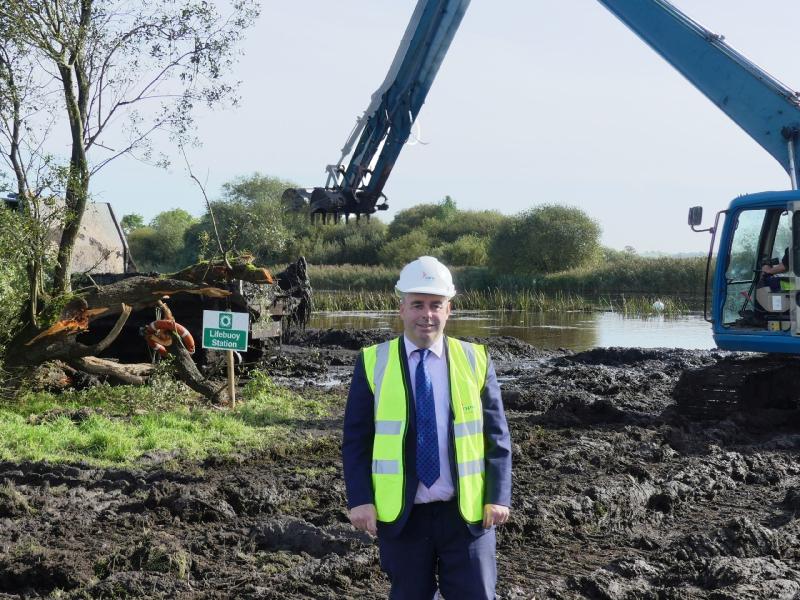 Minister of State for the Office of Public Works (OPW) Kevin 'Boxer' Moran says "considerable progress" is being made in progressing flood relief measures and works in the Shannon Catchment area.

He said work aimed at removing silt and developing foliage at Muckinish, close to Banagher on the Galway-Offaly border was just the latest in a long line of initiatives aimed at bolstering flood defences.

“We are here in Muckinish today which is close to the New Cut to see at first hand the targeted works that are being carried out by engineering staff from the OPW to remove silt and emergent vegetation at this part of the Shannon," said Mr Moran.

"I am delighted that the OPW was in a position to mobilise here last Thursday and work has since been ongoing in removing trees and installing a silt curtain to facilitate the channel works that we can see underway today.

"This is just one of seven locations where targeted works are to be carried out to remove silt and other materials to enhance the conveyance capacity and navigation along the River Shannon”.

In January, 2016, the Shannon Flood Risk State Agency Co-ordination Working Group was established by Government to enhance on-going co-operation across all of the State agencies involved with the River Shannon, including ESB, Waterways Ireland, Bord na Móna, Inland Fisheries Ireland, The National Parks and Wildlife Service, OPW and the relevant local authorities.

The Shannon Group has taken a number of significant decisions since its establishment, including to trial the lowering of the levels on Lough Allen by 0.7 metres, which is the lowest level achievable without causing significant risk to existing waterway infrastructure and possible environmental issues.

This protocol will be operated again this coming winter.