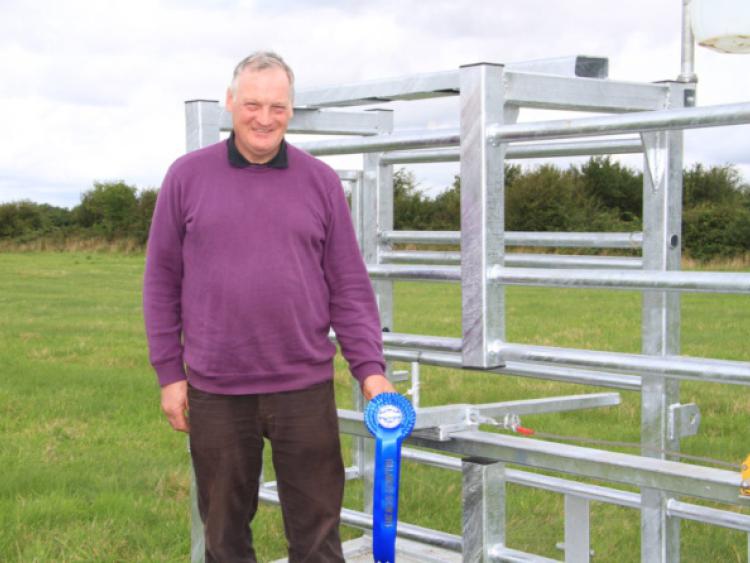 Vincent Kiernan pictured with one of his inventions at his farm in Coolarty. Photo: Michelle Ghee. www.gphotos.ie

He may be a quiet and unassuming man, but Granard’s Vincent Kiernan is well on the way to stardom this week as he gets set to display his fifth invention at the Innovation tent in the National Ploughing Championships which take place from September 19-21 in Screggan, Co Offaly.

Vincent’s latest invention - the KO Sheep Handler -is a follow on from his other products including the KO Doser; KO Cesarean Aid; KO Mover and the KO Quick-Attach Bracket.

This week he is part of a group of inventors across the country that are vying for an Innovation Arena Award at the ploughing championships and it is a place he has been on at least two other occasion with his previous products.

The KO Sheep Handler, he says, is a nifty product that will assist greatly, farmers who work alone.
And, it all came about because a neighbour of his - who was turning 70 - approached him and said he needed a machine to help him with his sheep because he had no longer had any help on the farm.

“We worked together and eventually we came up with the KO Sheep Handler; we got two prototypes and my neighbour is managing great now,” smiled Vincent.

His neighbour, he adds, wanted a three-in-one product - something that would turn the sheep up for pairing their feet and for dosing and one in which a footbath could also be provided for.

“It turns out now that you can also run the sheep through it and hand them to the sheep shearer at the other end,” the Granard man continued.

He also made a second product which held an additional spring assist that would enable the farmer to turn the sheep up on the rump so they would be more comfortable.

“It’s working out very well for my neighbour, so we will see what happens now,” continued Vincent as he spoke to the Leader from the Innovation tent at the National Ploughing Championships on Monday.
At the time, judges were working their way through the numerous inventions including Vincent’s KO

Sheep Handler, in an effort to determine a winner at this year’s Innovation Arena Awards.
The results will be announced on Wednesday and the Leader will be live from the National Ploughing Championships 2017 on the day, so stay tuned to see if the Granard man emerges victorious.

Meanwhile, Vincent’s KO Doser and KO Bracket have been taken over by Gibney Steel in Oldcastle, Co Meath while he continues to produce and develop the others at his farm on the outskirts of Granard.