CLICK THROUGH TO READ MORE: Holiday plans of many have been ruined by this action claim Irish Travel Agents Association 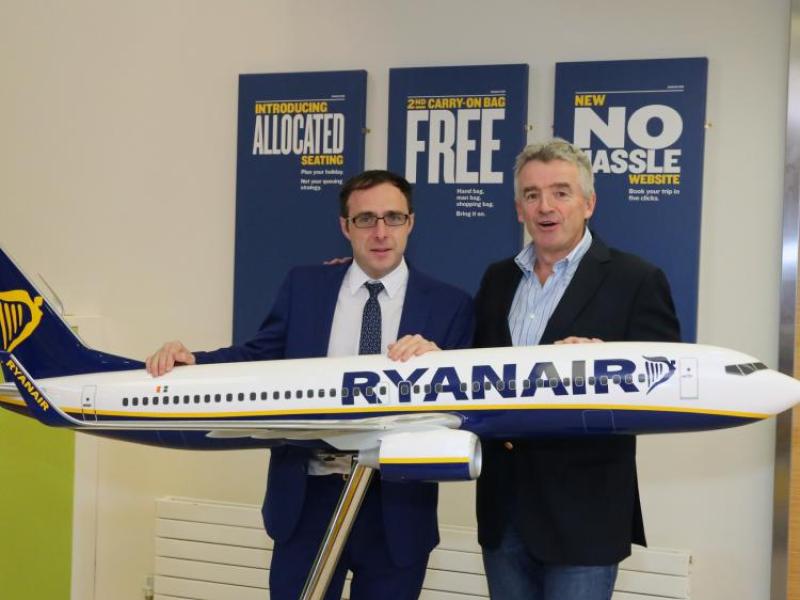 Longford/Westmeath TD Robert Troy has slammed Ryanair for failing in their duty of care to their customers after the airline announced it will be cancelling up to 50 flights a day for the next six weeks as it moves to reduce a backlog of holidays for staff.

The Fianna Fáil transport spokesperson said the decision to cancel the flights without adequate notice has caused deep concern to the passengers affected.

Ironically, last November Deputy Troy organised a special ‘Business in the Midlands’ breakfast briefing in Mullingar and the guest speaker was Michael O’Leary, the CEO of Ryanair.

Ryanair have explained that by cancelling less than 2% of their flying programme over the next six weeks, (until their winter schedule starts in early November) they can improve the operational resilience of their schedules and restore punctuality to their annualised target of 90%. It has fallen below 80%.

The airline stated,  “We apologise sincerely to the small number of customers affected by these cancellations, and will be doing our utmost to arrange alternative flights and/or full refunds for them.”

Deputy Troy said he was very disappointed with the manner in which the Ryanair decision has been carried out and communicated to passengers.

He added, "Passengers intending to travel over the weekend weren't given any warning to allow them to make alternative arrangements. I do feel that Ryanair have failed in their duty of care to their customers.”

He called on Ryanair to publish all planned flight cancellations and suggested that customers should not have ‘to wait for their refunds any longer than is absolutely necessary’.

Meanwhile, the Irish Travel Agents Association (ITAA) has expressed strong concern over the cancellation of flights by Ryanair at short notice.

Cormac Meehan, President of the ITAA, said, “Given the dominant position of Ryanair in the Irish aviation market place, this action has caused severe problems for thousands of travellers travelling to and from Ireland. For many, holiday plans have been ruined by this action where the option to change holiday accommodation is not possible or can only be done at a significant cost.

“Ryanair’s actions will also have a considerable impact on route schedules internationally where many travellers are dependent on their Ryanair flight to connect to onward international flights.”

“We are calling on Ryanair to publish a full list now of all flights they intend to cancel. The uncertainty of their actions is causing great unease amongst intending travellers.”

Meehan continued, “The ITAA condemn this action at such short notice. Ryanair have shown utter disdain on the consumer.  We look forward to the response from the Commission for Aviation Regulation."

The ITAA represents Ireland's travel Industry, bringing together 100 travel agent members and 70 affiliate partners. ITAA members cover over 140 outlets in different towns and cities throughout the Republic of Ireland. All travel agent members are licensed by the Commission for Aviation Regulation and are fully bonded providing full financial protection for their customers.