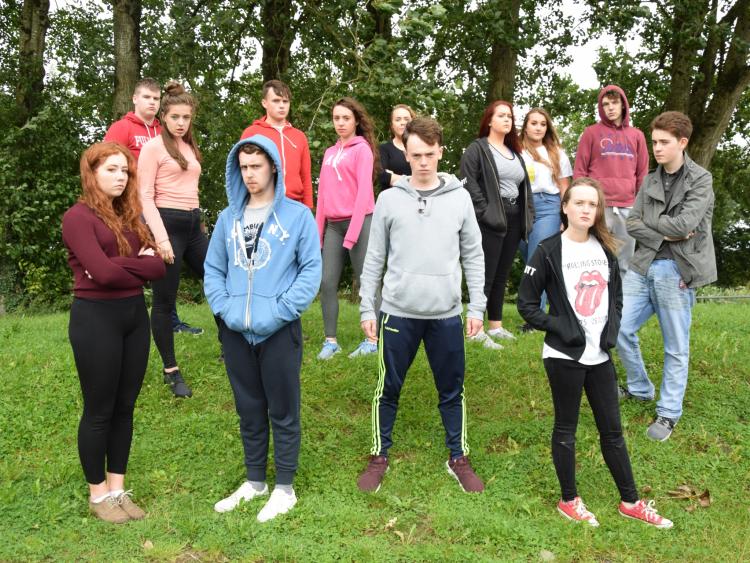 The cast of DNA

Every year Backstage Theatre gives members of the local community the opportunity to work with a professional director and theatre practitioners under their Artist in Residence programme.

This year, they have teamed together with Backstage Youth Theatre once again for the edgy and powerful 'DNA' directed by Maisie Lee.

Former Assistant Director with The Abbey Theatre, Maisie Lee has just completed an intense three week rehearsal period with the cast that included workshops with renowned choreographer Anica Louw who has choreographed the opening sequence.

This block rehearsal period has given the actors a fantastic opportunity to work with Maisie, getting into the mind-set of the play and focus on their character development.

“Working with a director as talented as Maisie has been quite an experience,”said Oisín O'Reilly, one of the cast members for the play.

The play itself is very topical. DNA is a gripping and at times very funny play with a very dark heart.

Its edgy theme, coupled with the fact that it is currently on the GCSE curriculum in the UK, makes it a very popular choice for young people, as it deals with just how far bullying can go.

“A couple of months ago, everyone was raving about 13 Reasons Why, which deals with suicide and bullying. And this play deals a lot with bullying and really shows the dynamics in a small group,” said Oisín.

“The story is about a group of teenagers who gather in the woods. And they’re hanging out and they have one friend who they sort of bully and get to do all these crazy things. And one of those things turns out to have tragic circumstances.

“So the teenagers try to cover up the crime. Any time they have the opportunity to tell the truth to the Guards or say it to someone, they just go into a weave of lies and deceit.

“It deals with the big questions about responsibility and who is to blame, and it really shows how not every situation like this is black and white.

“For example, if there was a spectrum of very good and very bad, our cast of characters would very much fall within the grey area.”

Oisín himself plays the character of Mark, who is one of the narrators of the story, along with two other teens.

“They would be feeling the guilt of what they have done to their friend, whose name is Rory. They try to justify their actions by saying they were just having a laugh,” he said.

DNA will be staged in the Backstage Theatre from Thursday September 21 to Saturday 23.

Due to the nature of the play, audience members should be over the age of 12.

“I think the most important thing is for people to engage with this play. Take it in because it sends a message about what can happen when bullying can go too far,” Oisín concluded.