Colehill native, Eithne Keegan, talks to the Longford Leader about winning a Justice Award in California 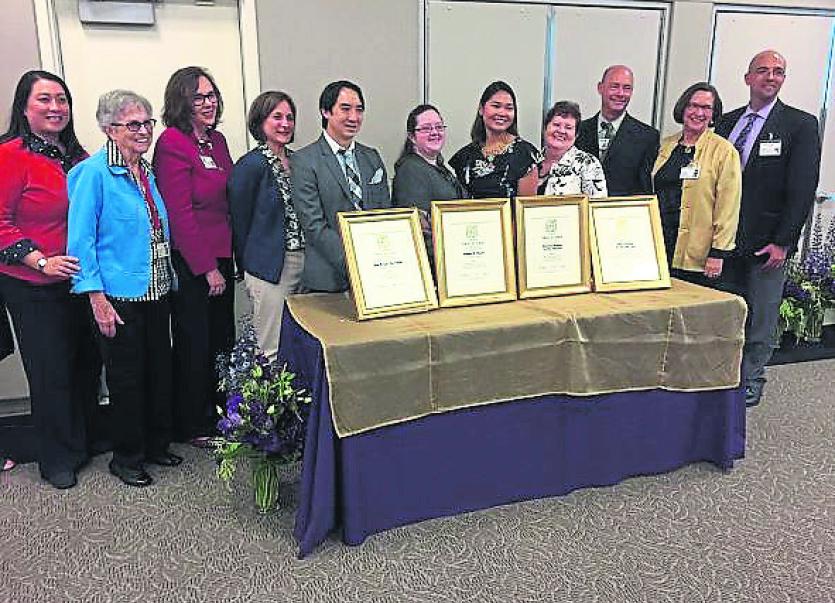 Last month a Colehill woman received a Justice Award for her community work in the United States.

Eithne Keegan is an Administrative Nursing Supervisor at the Mission Hospital in California and she received the prestigious Values in Action award for her demonstrated enthusiasm in calling others to work together to understand and serve the needs of the vulnerable members of her community.

She has also been involved in overseas missionary work for several years now and has travelled to Africa and Asia to educate and care for those impacted by HIV and AIDS.

Speaking to the Leader this week, Eithne says it was her role at the hospital and the facility's core values that enabled her to achieve many things in her life.

She was also selected out of 600 nominations for the prestigious award which she received just last month.

Mission Hospital is described as a trauma hospital with service, excellence, justice and dignity at its core.

“The Catholic Hospital system here is big into missionary work and encourages people around the world to volunteer to help each other out,” she confides while chatting from her home in California.

“One of the things I did was to initiate a colour change in uniform for our Registered Nurses (RN); I came up with the idea to select the one colour uniform for hospitals in several different countries around the world and we also issued them for women who were in battered shelters here.

“The idea was that it would help them to get back on their feet through fundraising.”

Meanwhile, staff at the hospital collected 1,700 sets of uniforms and distributed them around the world.

“They went as far as the Congo, Thailand, India and China,” smiles Eithne before pointing to the fact that many of those countries are places she visits regularly, providing education on AIDS to people residing there.

“It was this type of work that the judges looked at when they were determining who was deserving of the award.”

Some of Eithne’s personal attributes include compassion and empathy, qualities she believes are sometimes lost on ‘the millennials’.

“The millennials are big into technology and this has lead them to become self-centered,” she says, before pointing to the fact that many young people now are not “reaching out” and volunteering to help others less fortunate than themselves.

“What I really want them to do is to step out of their comfort zone and help others; I really feel that we are lacking compassion and empathy in our workplaces too.”

“I’m in charge of a whole hospital,” she adds.

“It is important that there is fairness and a non judgemental ethos.

“I am noticing now, for example, that because of technology, we are not taking the time to sit and talk to each other, nor are we spending that one to one time with patients either. We are not in the present moment.”

Eithne says that when mindful behaviour is practiced with conscientiousness, the outcome elevates conflict and results in a better work ethic in general.

“I sit with people and help them to be present - that is to stay in the moment and just be,” she continues.

“Very often and because of this one small behaviour, you find that the problem or situation just sorts itself out and all it takes is two minutes.

“Another very simple thing - just sitting down for one moment and holding a patient’s hand; that is all it takes to help that person feel better and it means you have been present in the moment and spent valuable time with them.

“It is a win win situation for everyone.”

Respect and dignity are also very much part and parcel of Eithne's day to day life.

These are also part of the hospital’s mission statement and have been a huge contributory factor in determining the Longford woman’s suitability for the recent award that was bestowed upon her.

“I feel it is important to show respect and dignity to everyone,” she adds, before pointing out that she established the Nzoia College of Nursing in Kenya with all of this in mind.

The hospital provides training for local young people so that when they qualify they can go back into their poor communities and administer healthcare to those who need it via a clinic system.

It has been a highly successful venture and one that is contributing to life changing experiences for many of the people living there.

“I wrote the curriculum for it; it took eight years to get off the ground but when we finally got there, it was worth the wait,” smiles Eithne.

“The area in which the hospital is based is very, very poor; people can’t afford to send their children to school.

“We offer scholarships and in some cases the community will rally together and raise a small amount of money so that a youngster can come to the hospital and train; they will then go back out into the community when they train and the effort comes full circle.”

The first graduation at the hospital took place in 2012 and 16 young people emerged with a Diploma in Nursing.

Since then the graduations continue and the health of the people in the region gets better and better.

“All we do is help them to break the cycle of poverty,” says Eithne.

“That is the key; if that cycle is not broken, the same things will keep happening and nothing changes for the community, so the fact that members of the community are able to go to the nursing school in the first place immediately breaks the cycle of poverty and enhances the growth and development of the community clinics.

“It really is wonderful to see how it all works.”

Eithne has also worked in palliative care for many years now and this is an area that has improved in recent times.

End of life care is as essential as any other service in health care and Eithne is proud of her contribution particular in the areas of AIDS and HIV.

“I have worked mainly in Africa in relation to this and much of the work I do is about breaking the stigma that is there,” she says.

“We also take care of people who have become infected and teach members of the community to help each other.

“Often an entire family might become infected and there is nobody in the home to take care of the members, so palliative care is a very important aspect of all this and something that everyone is the community needs to know.”

It is for these reasons that Eithne Kelly received her justice award and one which her colleagues say she was most deserving of.

Eithne is the daughter of the late Michael and Nora Keegan, Colehill.

There were six siblings in the Keegan family - three girls and three boys.

Eithne has a sister in Donegal and another in Ashbourne, Co Meath.

She herself is based in California while her brothers reside in Tipperary, Spain and Arizona.

Many of the Keegans' cousins still reside in Co Longford and Eithne was back in her beloved Colehill as recently as earlier this summer where she met up with many of her relatives during a special family reunion.

“My nephew also got married and we had such a lovely time at the wedding,” she concludes.