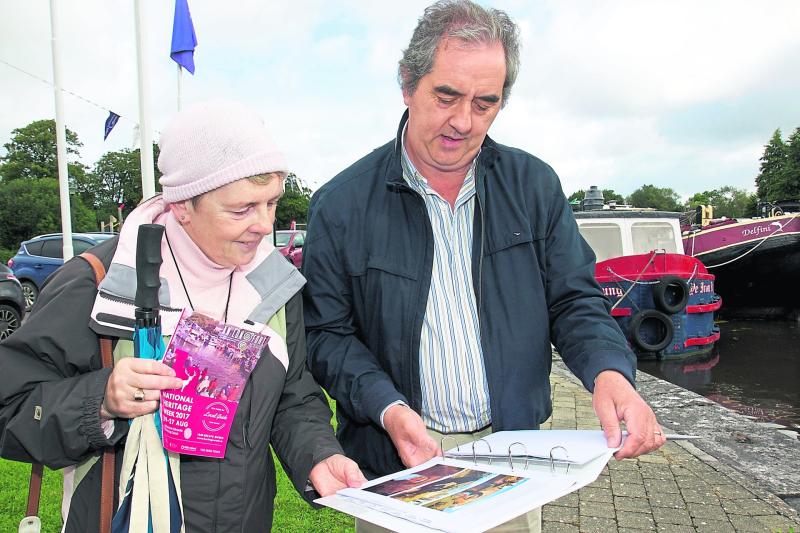 This year is the 200th anniversary of the Royal Canal and with Heritage Week being celebrated across the country just last week, the importance of the Canal has really come to the fore in recent times.

Richmond Harbour in Clondra was one of the most industrialised centres along the Royal Canal and the county of Longford thrived under its development.

Local historian and former principal of Stonepark National School, Eamonn Brennan spoke to the Leader this week about the history of the Royal Canal and Co Longford’s role in what became a manufacturing hub in the very heart of Ireland.

There was a huge fuss about all the big names at the time - Michael Collins, Thomas Ashe etc, but go back another 100 years to 1817 and the Canal arrived.

“That was 200 years ago when it arrived in Longford and when it arrived in Clondra; they began building it in 1790 and it took until 1817 to make it to Co Longford,” said Eamonn, before pointing out that it initially came as far as Mullingar in 1804 and then with time came to Longford.

“Well, before the railways the most efficient and cheapest method of transportation was on water - inland rivers and sea.

“The road network from the midlands to Dublin was non existent.

“It was all about the horse and cart which was slow and inefficient and could only carry small loads.”

In 1775 the Commissioners and Inland Navigation people looked for government funding - Daniel O’Connell was born that year and it was also the time when American Declaration on Independence was to the fore.

“It was a long time back,” continued Eamonn.

“The Government decided it would fund a canal network and two routes were looked at - one to the south from Sallins to Edenderry and Tullamore and to join the Shannon at Banagher, while the other was the northern route.

“In the end the southern route was chosen.

“Work went ahead, but one of the directors of the Canal body decided 'to hell with it, I’m going to build my own line’ and he sought funding to build the northern line.”

According to the local historian, they are not sure exactly who that director was - two names have come up and one was a man by the name of Cope who was a silk merchant in Dublin. The other was John Binns, a shoemaker - an obviously very well to do shoemaker, well-heeled, if you like!

“Binns Bridge in Drumcondra is named after him and there is a statue of Brendan Behan close by because of the song - 'The Auld Triangle, goes jingle jangle, all along the banks of the Royal Canal',” added Eamonn.

The years between 1817 and 1845 were the busiest time for the Royal Canal; it reached a high of about 46,000 passengers per year, all of them going up and down from all parts of the line.

But it was the arrival of the railway that started the decline of the Royal Canal.

“Passenger numbers on the Canal just stopped - it was a bit like Michael O’Leary on Ryanair; people stopped using the boat to go England because they could now get a plane ticket cheaper than a train ticket to Kerry, from Dublin,” continued Eamonn.

“Now, the Longford Canal line, and that is something that is often forgotten here; it arrived in 1827 which was 10 years after the Canal was opened up at Richmond Harbour in Clondra.

“Longford was feeling left out because all the activity was in Clondra - there was a distillery and plenty of industry - eggs were being exported all along the Canal to Dublin, England and everywhere.”

So, it appears that Longford town wanted in on all of that and the Canal line was eventually extended inward.

But interestingly, the Longford connection starts at Killashee - five miles into the town, and Clondra people got annoyed because they felt they were going to be by-passed; they would come out and sabotage the works at night.

“They would knock everything down and wreck the place and all that kind of thing, so the next thing was there had to be police presence to protect it,” said Eamonn as he recalled some stories that he had been told.

“Eventually reason prevailed and the Canal went into Longford, but it did impact negatively on Clondra and it declined somewhat.

“Longford then became hugely busy and at the bottom of Longford town near St John’s Church there is an arch with a sign on it that says Fee’s Yard; Thomas Fee was making bricks, carriages; there was a metal works there - a whole lot of industry and he employed 300 men and women there.”

At the time, the vast amount of the products from there were being exported on the Canal from Longford to England and all over the world.

“There is an estate in Abbeycartron in Longford town called The Brickfield and the clay for making the bricks at Fees Yard came from there,” Eamonn continued.

“They would come down in a horse and cart, collect the clay and head back up to the yard to continue with production.

“That continued on right up until the late 1800s; while passengers had died away with the railway, the transportation of bricks, manure, turf, coal, meal, cornmeal and eggs were still being exported by boat on the Canal.”

He then told a very interesting story about the egg industry.

“There were the eggboys,” smiled Eamonn.

“The trade in eggs in the 19th century became very worthwhile for women living in the country; there were egg markets at Lanesboro and Tarmonbarry.

“Eggs were collected from cottages from several miles around by runners - local boys from around the age of nine years old and up.

“They weren’t going to school, they were out collecting up the eggs.”

Each boy, it seems, had a regular beat which he went over every day.

They carried their eggs in a small hand basket; travelled about 12 miles a day and received a Shilling for every 120 eggs collected.

The boys would then sell their eggs at Lanesboro and Tarmonbarry where they would be packed in layers of straw in crates containing 10,000 eggs.

The eggs were then sent overland to Killashee which was the nearest harbour on the Canal and from there, it was off to Dublin on the boats.

“The Royal Canal provided an outlet to country people - people in the midlands - to get their produce to a wider market,” Eamonn added.

“After the Napoleonic wars, a man came back and built the whole way down from the Richmond Inn in Clondra.

“He had come back with money and invested it at the end of the Royal Canal - where else would you go - and Richmond Harbour became a great gathering place for people and business dealings.”

Meanwhile, local legend has it that, in 1938, two local men from Clondra walked to the All-Ireland Final in Dublin along the Royal Canal and walked back home again with plenty of stories to tell.

There is a story told of a boy from somewhere in south Longford who was in Dublin for the Eucharistic Congress in 1932.

He got separated from whoever he was with and followed the Canal home to safety.

“Noel Hickey - a native of Clondra - remembers a story he often heard from his father; his father got large white flour bags from a passing barge and he cut out a neck hole and two armholes,” smiled Eamonn.

“A green sash was added on the right shoulder and the shamrock over the heart. It is said that is how the St Bridget’s football jersey of Killashee and Clondra was created.”