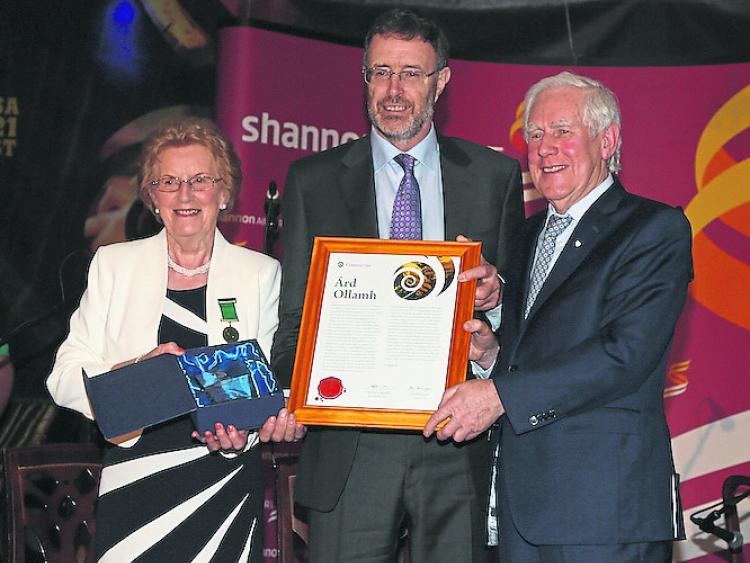 Lanesboro's Pádraig Donlon was awarded the Ard Ollamh na Fleadh at Fleadh Cheoil na hÉireann last week. Here he talks music and life and how both work for him.

An All-Ireland Uilleann Pipes and Tin Whistle champion, Pádraig has been to the fore of traditional music not just here in Longford, but also in Co Louth - where he lives in Dundalk with his family - and throughout the whole country.

Pádraig says it didn’t dawn on him how significant the award at the Fleadh was until he received it at the Gala ceremony the other night.

And, as for the music, well as Bob Marley once said, “One good thing about music, when it hits you, you feel no pain”, and Pádraig Donlon got that hit when he was only a gasún.

He told the Leader this week, that both his parents were musical.

“My father played the fiddle and my mother was a set dancer - her brothers were very musical too, so I suppose you could say I had a good background in music,” Pádraig smiled as he recalled those days when his father, dedicated to the cause, showed patience and tenacity as he taught his young son how to play the Tin Whistle.

“I had great interest in the music.

“I remember Fr Séan Quinn was Curate in Lanesboro at the time and he too had a keen interest in traditional music, so he gathered up all the young musicians from around the county and we would practice at his house on Friday nights.”

When the Lanesboro man was just 12-years-old, his father got him a practice set of pipes and it would be fair to say that the Longford man never looked back after that.

Pádraig Donlon has established himself as one of the greatest pipers in the country at this stage and travels the world playing to the masses.

He says he taught himself the pipes and that he had a great ear for music, in fact it was by ear that he learned to play his instruments.

“There was weekly sessions in Fermoyle National School on Monday nights and it was through Comhaltas and Fr Quinn that I began meeting musicians at these groups - people that were hugely influential on me, I suppose,” added the brother of Nuala and Teresa.

There were visiting musicians too - most notably Patsy Hanley from Roscommon and Pat Kilduff.

By 18, Pádraig had learned his trade, as they say, and he felt confident in his musical abilities.

He headed for college in Athlone and after qualifying took up a position with Bord na Mona in Edenderry.

While based there, he partook in the local sessions and got to know the musicians in the locality.

Two years later he took up a position with Louth Co Council in Dundalk in 1985; the move opened up a whole new set of doors for him with regards to the music.

He became a member of the very successful Seimse Ceili Band and in 1989 and 1990 they won All-Ireland titles.

In ‘89 Pádraig also won the senior Pipes accolade and was also All-Ireland Tin Whistle champion in the 1980s.

Then, in the mid 1990’s he founded his own ceili band - Táin Ceili Band - and members have played across the world to dignitaries including Michael D Higgins and former Uachtarán na hÉireann, Mary McAleese.

Táin Ceili Band also hit the big time at Fleadh Cheoil na hÉireann and took three in a row All-Ireland titles in ‘98 ‘99 and 2000.

Fellow Longford man, Tommy Flood is the drummer in Táin Ceili Band and Pádraig is proud of the local influences there.

“The local musicians that I would have known when I was a child loved their music and were only too happy to pass it on at the sessions,” Pádraig smiled, before pointing out that something of note there, was, the fact that many of them lived in close proximity to each other.

“There is none of them left now, except my sister Nuala, who lives with my mother in Lanesboro.”

He also smiles when he remembers there was no music classes back then; if you wanted to learn music, you had to have the ear!

“These days people go all over the country to music classes, but in my day that was unheard of,” he continued.

“It was very much learned by ear; you went to the sessions, listened to the music and picked it up.

“That was just the way it was and when I think about it now, those sessions in Fermoyle National School really were a huge influence on me.”

And aside from working in Louth Co Council and playing with his band, Pádraig also teaches music in Dundalk and coaches bands.

He has held administrative duties with various musical organisations and has been an integral member of Comhaltas music tours over the years.

He also plays with a Comhaltas Group in ‘Cashel, Co Tipperary - Brú Ború, a traditional Irish music outfit that is in high demand all over the world these days!

“When I was growing up, the traditional music was very much based in the south of Longford, but that has changed now,” said Pádraig.

“There is a lot going on now in Edgeworthstown for example and even out in north Longford too and I suppose that has been influenced by the Joe Callaghan branch.”

For Pádraig, traditional music has been a lifelong passion and he wonders now what he would do with his spare time, it it wasn’t for the music!

“I have always been involved - whether it’s playing or working in the administrative side of things - and I often wonder what I would do in my spare time now if I didn’t have the music,” he laughs.

“There is a deep sense of responsibility that comes with traditional music and a desire to improve the whole set-up as well.”

Pádraig’s wife Valerie Leech is an Irish dancing teacher and the couple’s four children are involved in the music scene as well.

In fact, Pádraig’s daughter is an All-Ireland winning Harpist.

The Longford man has appeared on numerous TV and radio shows down through the years as well.

Pádraig Donlon’s most recent achievement - that of being honoured with the Ard Ollamh na Fleadh award came as little surprise to those working in the area.

He was, however, shocked by the announcement.

He is regarded as a true advocate of Irish music - ‘A Longford man who has spent a lifetime selflessly promoting and passing on traditional music skills’.