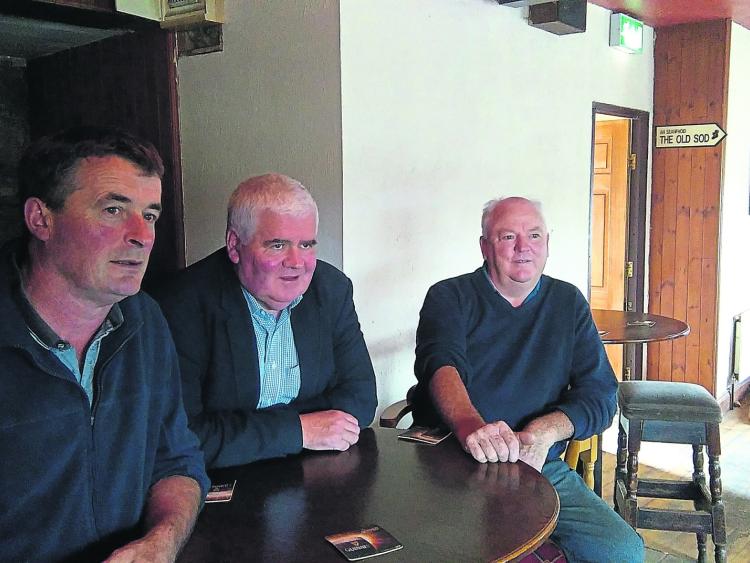 Bernard Gilligan, Cllr PJ Reilly and Paul Smith in a reflective mood as the trio gloss over the current state of Longford's rural pub trade from inside The Mill Tavern in Ballywillan this week

Just like the age old tradition of potato boxty, the family-run rural pub has been a staple of community life for generations.

In more recent times, and owing to an accumulation of contributory factors, it has steadily become more and more of an endangered species.

No more apparent has such a mindset prevailed than in the north Longford village of Ballywillan.

Straddling the Longford-Cavan border, this tranquil, unspoilt neighbourhood at one time was home to not one but two licenced premises.

Today however, the village stands rudderless without a pub to its name and, perhaps more importantly, without that vital social lubricant which has come to bind so many communities together.

Its two former owners of The Mill Tavern and Gilligan’s this week sat down to reflect on their own respective decisions to step away from pub life and assess the current state of an industry still beset by uncertainty and economic fragility.

“I fell into bad health for a while and after having a while to think about it, it just wasn’t viable any more,” said Paul Smith, ex proprietor of The Mill Tavern.

That sense of loss and misfortune was one which was spelled out in the backdrop of another prominent local landmark which also stands closed-Ballywillan Train Station.

Having suffered the huge emotional and personal loss of his late wife Bridie in 1999, few would have begrudged Paul from shutting up there and then.

But as is so often the case with rural pubs of its kind, the father of six arguably got as much enjoyment from serving its dependable following as those who passed its doors night after night.
“It was great company for me and the neighbours were great,” Paul confided.

“When you would have everything paid you wouldn’t have anything left.

“I had a good, loyal people who would come in and out to it.”

A regular port of call for bachelors and farmers, it was the type of pub that has come to define the very epicentre of rural Ireland.

A prime example of that perception was aptly summed up by a conversation Paul recalled having when a garda called to his door during the early hours of the morning.

“She said: ‘Do you know it’s an hour and a half or two hours after closing time? ‘Are you going to close?’

“‘I said not really. There are four men in there and they are engrossed in a conversation. The youngest is about 71.

“I said: ‘You go in and tell them to leave,’” prompting the unnamed garda to make a sharp exit.

The simplistic innocence of that exchange was conceivably best summed up by the intimation from one of the group of elderly customers that the waiting patrol car might be their best option of a lift home.

It's a conversation Paul firmly believes signifies the very epicentre of an industry he still yearns for.

And some 15 months on from calling time on a business which had remained part of the Smith family name for well over a century, the decision was one that still unnerves him.

“Ah Jesus it was tough,” he sighed.

“There was a lot of sadness I’ll tell you that. I’d still kind of like to open it now. You never know, I might get someone to open it but no one would give you rent for it. There wouldn’t be enough in it to pay rent.”

His observations on the apparent demise of the rural licensing trade are more cutting.

Emigration, competition from supermarkets, high excise duties, and the much maligned economic downturn you would think would take centre stage.

But as Paul fervently vouched for, more draconian localised concerns remain at play, one of which exacerbated his own departure from Longford’s licensing trade.

“Drink driving wasn’t a big issue for me really,” he remarked.

“That was because a lot of them that used to come would be dropped off and collected by family.

“The thing is you have rates and if I am to be fair and speak my mind then I would say that it was rates which put me out (of business).

“I was never clear with the rates to tell you the truth. To be quite honest I could nearly not say what they were because we were always behind.”

Despite Paul's candid views on drink driving, he was equally direct over how such legislation has impacted on rural towns across north Longford.

“You go into Granard any Friday and Saturday night and you will find that it's empty.

“People might say towns like that are on its knees. But the reason they are on their knees is because you had people coming in from Abbeylara, Mullinalaghta, Coolarty to have a drink in their locals,” he said.

Those insights were ones Paul’s neighbour and fellow former publican Bernard Gilligan gave further credence to.

Unlike Paul, whose exodus from the pub trade came just over a year ago, Bernard last stepped behind the bar of his family run pub in 2005.

As historic as the now closed railway station it looks out on, Gilligan’s at first glance looks more like a dainty provincial country house than a rurally based watering hole.

Much like its near neighbour, it relied on a small, yet steadfast bunch of customers.

“This (pub) would have closed for different reasons than what you see pubs closing nowadays,” admitted Bernard, his legs resting on a wooden bench.

“Take a Sunday night back when we were children and you took the road up to Granard there would be someone nearly from every house in a pub at that time.

“Slowly but surely there is not even a human being come out now.”

Local Councillor PJ Reilly has never been one to shy away from a debate, especially one so intrinsically ingrained and pertinent to his own community.

Like Paul, the Abbeylara man referenced the difficulties smaller pubs with modest turnover levels had when it came to meeting their own commercial rates commitments.

Just as relevant, he added was the tightening of drink driving laws and the closure of Ballywillan Railway Station in 1959.

“Ballywillan, for the last 100-150 years always had a railway station. It regularly brought in freight (shipments) from Mullingar and what's more Michael Collins would often be picked up there by the Kiernan family when he was visiting the area,” said Cllr Reilly, as he switched his focus to Ireland's stringent drink driving laws.

“Of course everyone has to be mindful of the rules over drinking and driving,” he said.
“But it has had a big impact on rural areas and in particular single men.

“It was a social event for so many of these people to go for a couple of quiet drinks but with the way things are that's gone and it's a shame, a real shame.”

Disappointment, though, is a sentiment you wouldn't automatically appropriate to the man whose family name has been steeped in the rural licensed trade for generations.

Given the age profile of Gilligan's' clientele, Bernard said there was an almost inevitability over the pub’s future just as Ireland’s Celtic Tiger was losing its mojo.

“Some of them (customers) used to call in three times a day maybe. It’s different time now I suppose with people having mortgages and that.”

By 2005, the business was effectively defunct. That said, coming to a realisation that a livelihood which had remained part of the Gilligan family name for well over a century was suddenly no more undeniably took its toll.

In a striking show of solidarity symptomatic of rural life, Bernard was more concerned about the effect it would have on those who had kept the business afloat over the years.

“The likes of here it was long gone before we closed but the fact your parents owned it or it was in your family for years it was hard to (close it).

“Even before we closed you would have half a dozen of lads that might come every night and then you might have some that would come every other night and suddenly they had nowhere to go.

“That was hard from that point of view. You could have some that would call religiously every Sunday evening and that was the reason you would keep it open.”

As for his own take on the pressures which hastened its closure and the pressures facing publicans nowadays, Bernard echoed the sentiments espoused by Paul.

Though faced with an estimated annual €700 commercial rates bill, the north Longford farmer shuddered at the furore which still surrounds new valuation laws.

“The rates thing was harmless enough for years,” he said.

“They weren’t pushing it too much. But even back in my time it was still around €700 odd a year but all of a sudden they doubled them.

“Now you hear of people coming out with crazy bills of three to four thousand.”

His straight talking demeanour is intriguing, something which could also be said of his rather blunt assessment of Longford’s broader pub trade.

“It’s completely on its knees,” he candidly put it.

“At the end of the day if you are going to open a pub from 5pm and sit there till 12:30am, sure you have to be getting paid for it.

“I’m not talking about a week’s wages but you can’t be losing money in it.”

In spite of those misgivings, Bernard hinted that all may not be lost.

Trying to keep up with innovative new ways to stem declining sales is one thing, but he said the integral role a pub can have on a parish cannot be understated.

“It’s not beyond repair though because it (pub) keeps communities together,” he said.

“There are very few communities that haven’t got a pub to call on.

“If you take Abbeylara say, what kind of a village would you have if its pub was taken out of it?

“At least the pub, for the Tidy Towns and the like, it’s somewhere these people can have their meetings.

“It brings the few people that live in these places together.”

And that is perhaps the greatest challenge facing an industry which now finds itself at a critical crossroads.