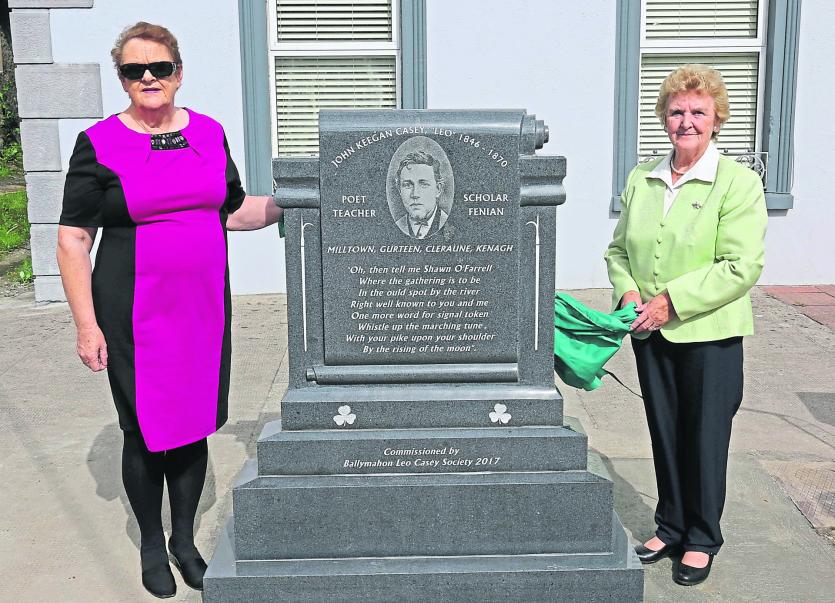 Teresa O'Donoghue, Secretary of Leo Casey Historical Society is joined by fellow committee member Mai Reilly to unveil a monument in honour of the late poet and writer Leo Casey.

There may have been the small matter of an All-Ireland semi final replay being down for decision in Croke Park on Saturday but you wouldn’t have guessed it as Ballymahon paid a lasting tribute to its adopted son-revered 19th century poet and writer, Leo Casey.

The much respected literary master was honoured through the unveiling of a commemorative monument as part of Heritage Week 2017.

Charmingly handcrafted by local sculptors Leavy Memorials, the finished product marked the culmination of many months of diligent behind the scenes efforts from an 18 strong Ballymahon Leo Casey Historical Society.

Its chairman, local historian and MC for the day Paddy Egan helped set the scene for around 80 locals and interested observers in attendance.

There were speeches too, many of them focusing largely on the Westmeath born writer’s, links to Longford and the wider Ballymahon area.

They were led by Fr Tom Murray and Longford Historical Society, Chairman Hugh Farrell.
“The people of Longford have always had a great regard for John Keegan Casey, the Fenian poet and literary genius,” said Mr Farrell.

“His poetry and song has endeared him to successive generations of our people both at home and in foreign lands.”

Poems and music, a prime catalyst behind Casey’s rise to prominence during a famine hit Ireland, predictably took centre stage.

Local groups Tanglewood and Innyside Singers showcased the former while the latter came courtesy of recitals from Philip Morrell and Esther Turner.

Cllr Farrell said he was still staggered by how much Casey had achieved before his sudden passing at the age of 24.

Cllr Mulleady, on the other hand opted to bring an element of humour to proceedings, joking about how he wouldn't mind spending more time in the Ballymahon area should he ever decide to further his own political ambitions.

“I wouldn’t know that many people over this side but if I go further afield I would like to get to know yous better,” he said.

I don’t think that will happen but you never know.”

Local TD Kevin 'Boxer' Moran, who was in attendance and fresh from his attempts to respond to the Donegal flooding crisis even got a mention.

Facetiousness aside, the Drumlish councillor said there was little denying Ballymahon was a town very much on the up.

“Just look at the traffic that is coming through here and what with Center Parcs coming, it is the place to be in Longford.”