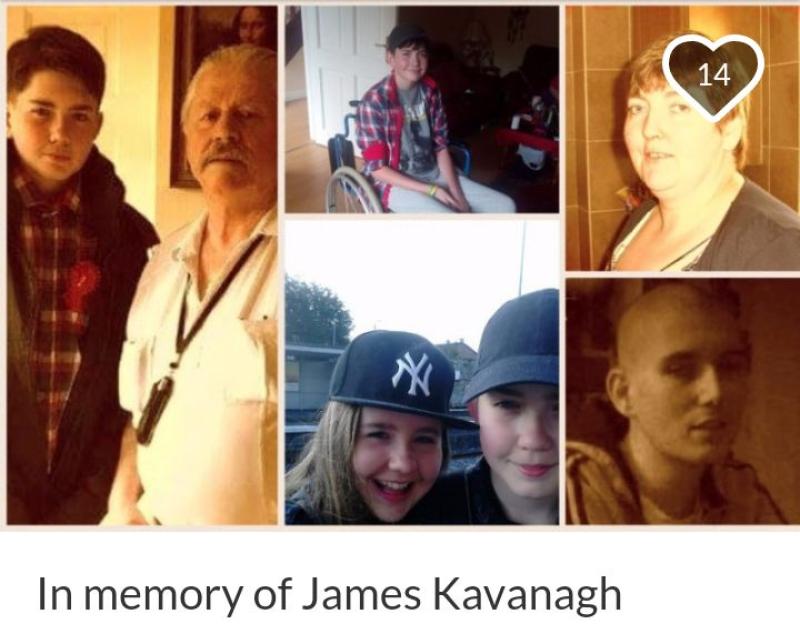 A major fundraising campaign is underway to support a local family who have suffered not one but three major setbacks and tragedies in the space of less than a month.

The Kavanagh family, originally from Dublin, but for the past number of years living in Longford, have more reason than most to assume fortune is very much against them.

Those emotions were ones which can be traced back to the beginning of July when mother of five Audrey Kavanagh underwent major surgery at Mullingar's Midland Regional Hospital.

A week later and while recuperating at home, word came through that her 14 year-old son, Leo, had fallen from a 25 ft high wall and onto tracks at Longford Railway Station.

The teenager, who broke both his legs as a result, underwent corrective surgery as a consequence.

Days later, an even greater affliction would hit the family when Audrey's oldest child, James passed away suddenly at home from a suspected epileptic fit.

"It was me that found him," said a plainly distressed Audrey as she spoke with the Leader earlier today.

"I was just going up to his room like I would always do to check on him and to see if he wanted some tea and toast or something to eat."

"It was just terrible. It all happened so fast."

As friends and family gathered round her and partner Johnny alongside their four other children in the wake of James' untimely passing, the family were dealt yet more bad news.

"Johnny began falling all over the place," recalled Audrey.

"We thought he had vertigo or something and he went to the doctor on the 25th (of July)."

Following a series of tests carried out in Mullingar and then Dublin, Johnny was diagnosed with cancer.

Audrey said the family have been left absolutely stunned and dismayed by the events of the past six weeks.

"You couldn't make this kind of story up," said Audrey.

"Has someone some kind of spell over us?"

To make matters worse, Audrey said the couple's youngest child, 13-year-old Lilly May is struggling to come to terms with what happened to her late brother.

"Lilly May is an epileptic as well and now she thinks the same thing is going to happen to her," added Audrey.

"I just keep saying to her everyone is different. I'm just trying to keep her happy and for her not to be thinking."

In a bid to support the family, friends have rallied around by setting up a GoFundMe page while a special benefit night will be held this Friday night at Andy Bryne's from 8pm.

To contribute and to find out more, log on to https://www.gofundme.com/in-memory-of-james-kavanagh