Running for Gold: hitting the road for Longford Marathon 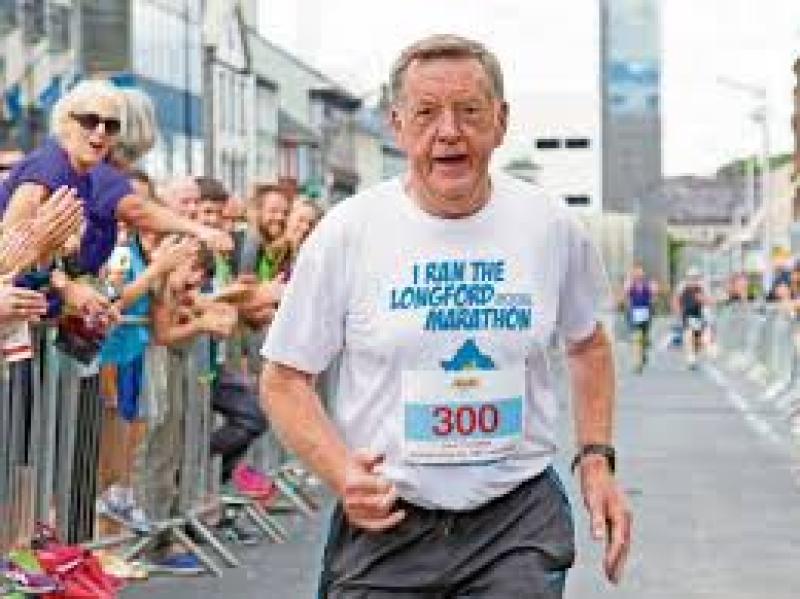 Liam Fenlon is running his 311th marathon this weekend

It was in 1984 that Longford man, Liam Fenelon, ran his first marathon. Since then he's run over three hundred more and doesn't plan on stopping just yet.

In fact, his 311th marathon will be run this coming Sunday as he prepares to take to the roads for the 16th annual Longford Marathon.
“The first Longford Marathon was my 100th marathon,” he explains to the Longford Leader, adding that it was set up for that reason.
“So far, nobody has been hurt, but if anyone ever was, I would feel responsibile for it because it all started for me and when I see all the people there, I feel like I'm the cause of it. It's a great buzz.”
Over the past thirty-odd years, Liam has run close to 100,000 miles, raised over half a million for charity and travelled all over the world.
His goal was to run 300 marathons before he turned 75 and he achieved that goal this time last year.
In fact, since then he's run 10 more marathons - not that that's unusual for him.
“I once did 19 marathons in a year, but I'm not taking it as seriously anymore - I can't because of my age,” he explains.
“But I've travelled the world with them. I've completed all of the major ones.”
There are six major marathons in the world and Liam explains that he has run in London seven times; Boston twice; Chicago once; Berlin six times; New York seven times; and completed the sixth major world marathon when he ran in Tokyo for the first time last year.
And his achievements won't go unrecognised, as global healthcare and research company Abbott are sponsors of a jacket and a medal given out to everyone who completes all six world marathons.
It's certainly an incredible feat for a man in his mid seventies to have so much road behind him, and he recalls the journey with great pride.
“For my first marathon, it took six months to train - you have to train for six months so you don't get injured.
“If you want to do good times, you should run 60 to 80 miles per week. I used to run twice a day and in '93, I ran the Dublin marathon in three hours and nine minutes. I was 51 at the time,” he says.
Of all the marathons he's run accross the globe, there are some firm favourites that Liam will always remember fondly.
“I always go back to the Midnight Sun Marathon in Tromsø, Norway,” he says.
“You start at 10 o'clock at night and people start to finish around midnight and the sun is still shining.
“That will always hold a special place.”
And while that will be an experience Liam won't forget, he says the Marine Corp Marathon in Washington DC will always be another one to stick out in his memory:
“For the simple reason that I've never been at a marathon so well organised. It was like clockwork.”
Of course, Liam adds, his first time running in the New York Marathon and the London Marathon will always be very special memories, and the Isle of Man is another enjoyable one.
In fact, when it came to setting up the Longford Marathon 16 years ago, Liam used his knowledge of marathons all over the world to make the Longford Marathon what it is today.
“I tried to get the best of all the marathons when organising this one,” he explains, saying that there will be food provided and a free pasta party the night before the marathon.
“I believe if you step back at all with the standard, you're going in the wrong direction,” he says. And the Longford Marathon is certainly only getting stronger.
“There are so many marathons in Ireland now, but our numbers are building. The more people we have, the more we have for charity.
“Unfortunately, there are too many races on now. When we started, we were the third marathon in Ireland.
“Now there are three marathons on the same day as ours and a half-marathon, so that is a problem.”
Despite that, the numbers are up and the level of support received over the past 16 years has been phenomenal.
“But for our sponsors and volunteers we couldn't do it,” Liam admits.
“Pat the Baker has been our sponsor for eight years and we're grateful to them and all the people who give us financial support and support with food and other things. They've all been so kind to us.
“Now with health and safety, we have to have more stewards and more people helping out with food.
“The Longford Arms have been very good to us since we started, but especially in the past two or three years, and this is one of the best days they have every year because the place is jammed.”
It's important to acknowledge how good the marathon is for Longford itself, and Liam is not slow to point out the benefits of having an event like this in the Irish midlands.
In fact, with the numbers of people travelling from all over Ireland and all over the world, there is no accommodation available in Longford for the weekend.
“We try to keep as many people as possible in Longford, but some have to go to Mullingar or Carrick-on-Shannon for accommodation because we're full.
“If we had the tourist board behind us, it would be great. We'd need the support to get more people here.
“I think that if we could harness the Longford Marathon right, we'd have repeat visitors.
“We've got English people every year, and people who come all the way from Australia especially. We've got 15 countries represented in this Marathon.
“If this could only be harnessed to bring people back during the year, it would be great for Longford.”
And, of course, all organisation aside, this weekend's event will be Liam's 311th marathon, his 16th Longford Marathon, and yet another 26 miles of road behind him.
“I'm looking forward to this weekend's marathon. And I'm proud to be a part of it,” he concludes.