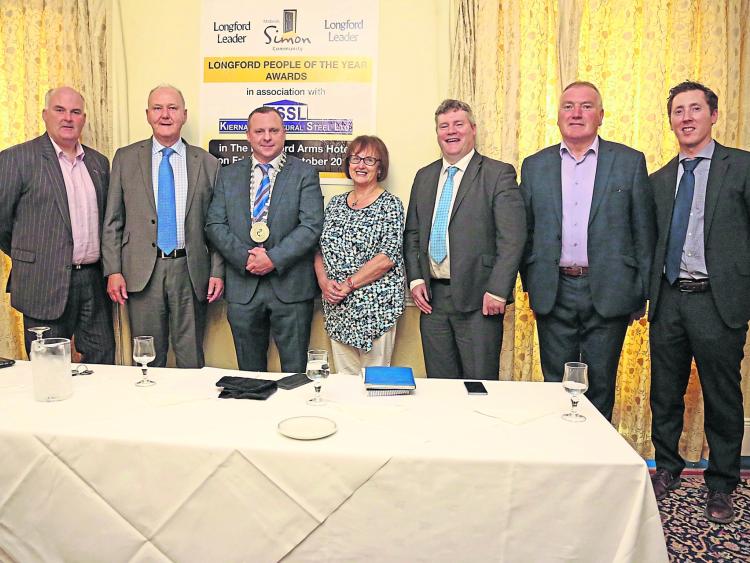 There was a great turnout for the recent launch of this year’s Longford People of the Year Awards.
This the second year of the fundraiser for Midlands Simon and it is once again sponsored by Kiernan Structural Steel whilst the Longford Leader are back on board as the media partners.

The awards provide the community with the opportunity to honour individuals that have made lasting and inspirational contributions or whose achievements in themselves have been worthy of recognition.

The recipient of the overall award last year was Victor Connell, the disability campaigner from Killoe.

“Our work in Longford would not be possible without the support of the community and it is a great opportunity to recognise the achievements of community leaders.”

“We are fortunate in Longford that we have the support of the community; Longford Council and the HSE. With this support Midlands Simon are able to intervene and successfully support people to have a home of their own.”

The launch event was one of the first official functions for newly elected Mayor of Co Longford, Cllr Martin Mulleady, and he commended the great work being done by Simon.

He also praised the role and involvement of the housing dept in the Council and said he was aware that they had a very strong and solid relationship with the Simon team.

He added: “Everybody deserves to have a roof over their head and homelessness comes in many forms but it is unacceptable at any level and we will work with Simon and any other agencies to combat the problem.”

Ballinamuck woman, Tess Murphy, is the President of Midlands Simon and she told the gathering that she was pleased to see the work and progress being made by the organisation in the county.

She peeled back the layers and explained the different aspects of homelessness and whilst the issue isn’t as visible or evident in the county, it is a very real and unfortunately growing problem.

Joe Flaherty, MD with the Longford Leader, said the paper was delighted to work with the awards again this year and especially as the proceeds from the event will be used to combat homeslessness in the county.

He reserved special mention for Frank and Dolores Kiernan of the sponsors, Kiernan Structural Steel, and said that the Kiernan family have never been found wanting when it came to supporting community event and organisations.

For his part, Frank Kiernan, said the family are delighted to be involved in this year’s awards and he hoped that they are a great success and will aid Midlands Simon in their bid to tackle homelessness in the county.

If you wish to nominate somebody for an award this year, you can do so by completing the coupon that appears on page 14 and will continue to appear over the coming weeks.

The closing date for nomination coupons will be Friday, Sept 9.