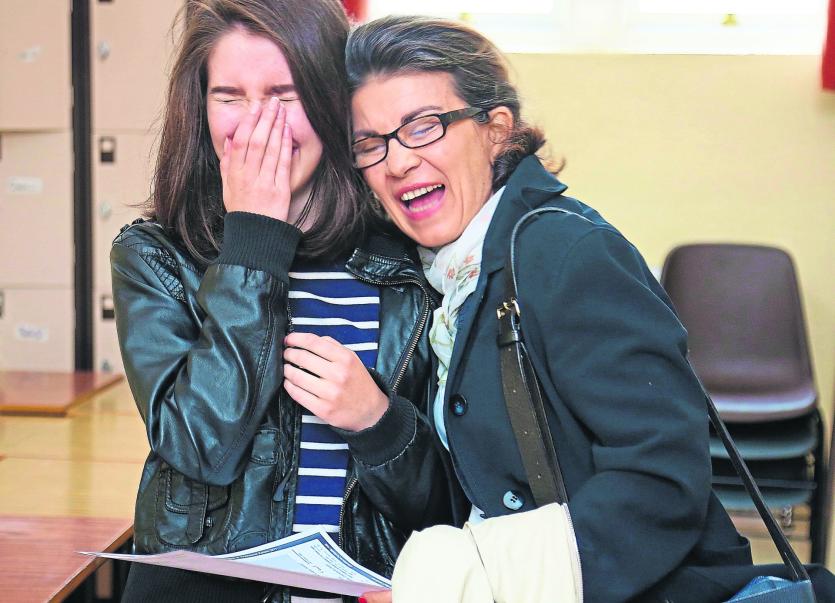 Longford students gathered in their droves at the nine secondary schools around the county last Wednesday as the Leaving Certificate results were handed out.

There was a great buzz in the county as 553 students opened envelopes to reveal the outcome of months of study during the academic year.

Two of Longford's students received top marks in this year's exams, earning themselves 635 points each; that's the maximum result of eight H1s on the new grading system, meaning they got a grade of between 90 and 100 percent.

The two students were Elizabeth Larenz from Cnoc Mhuire, Granard, and Shauna Burke from Ballymahon Vocational School and Principals from the respective schools were quick to praise not only their top students, but students across the points spectrum.

“We've had exceptional results from very top marks of 625 points, and five or six with 550 or 570 points. But I want to congratulate all our students on their great achievement," said Moira Mahon, Principal of Cnoc Mhuire, Granard.

"We had the full range of results - the high points, but also the students who struggled, and I want to congratulate them for sticking to the course and doing the Leaving Cert. It was a struggle, but they did it."

Rosemary Johnston, Principal of Ballymahon Vocational School said that Shauna was a very hard-working student and her results were “terrific”.

"She studied very hard and did so well," she said.

“Overall the results were great. We've had very high points. The students worked very hard. We're very pleased. There were a lot of personal bests too. They were a great bunch of Leaving Certs."

According to their respective school principals, the two girls are planning on studying science in college and are thrilled with their results.

Other schools around the county are also brimming with pride following last week's results.
Josephine Donohue, Principal of Mercy Secondary School in Ballymahon said that she was very proud of her students for their achievements.

Scoil Mhuire Principal Aoife Mulrennan was also delighted with the results received by just over 90 girls in the Leaving Cert class this year.

"We had 30 per cent of the girls getting just over 400 points and 15 per cent getting over the 500 mark. A lot of them are very happy with their results," Ms Mulrennan told the Longford Leader.

"We had huge levels of attainment in the three core areas of English, Irish and Maths - 100 per cent attainment across those three in the higher level, which was phenomenal success for the girls, so we're very proud of them, very happy."

Meanwhile, over in St Mel's College, Longford, Principal Declan Rowley expressed similar pride and delight at how well the young men in the school had done.

“I must say, I had a lot of happy faces,” he told the Leader last Wednesday.

“There were some great top results, but also the kids in the middle seem to be happy that they got the points for their chosen course, and that's key because sometimes we put a lot of emphasis on the top kids.

“But every kid is aiming at some level and they have to maximise their potential.”

One of the 67 Leaving Certificate students in St Mel's achieved 590 points, according to Mr Rowley, while five or six of the lads had over 550, and seven or eight more had over 500.

“I'm very happy. I think there's generally a very even balance every year.

“I think the kids who put in the huge work get the results, and the kids who don't overly work - they're not all suited to school, but they've all achieved the level that they needed to achieve.”

“College is not for everybody,” he added. “Whatever your dream is, go after it and it doesn't have to be related to college.”