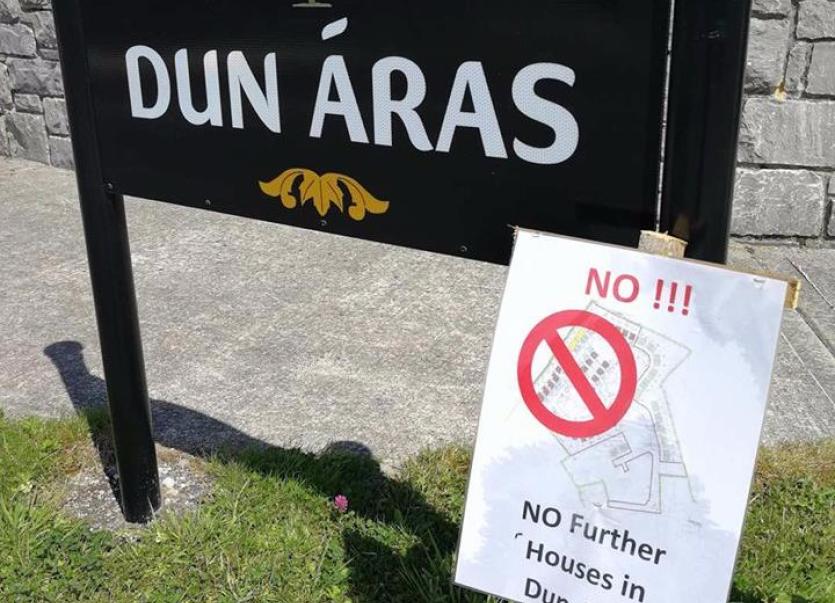 A total of 48 submissions have been lodged to the county council after it emerged that Mark Cunningham was seeking planning permission to build another 39 houses in the Dún Áras estate on the Ballymulvey Road, Ballymahon.

The road will also be one of the main routes to the new Center Parcs in Newcastle Woods and, with no footpath and a width of just 14 feet in places, more traffic could prove disastrous, according to objectors.
Residents of Marian Terrace, Parkside and various other locations around Ballymahon, as well as business-owners and members of the Tidy Towns Committee also backed the campaign to stop the development from going ahead.
Minister of State for the OPW Kevin 'Boxer' Moran met with residents to discuss the issue as the Ballymulvey Road traffic exits across from his Ballymahon office.

Seán Clancy of the Dún Áras Residents' Association said he is "delighted and overwhelmed" with the amount of support that the residents have received.
"It just shows how much the whole community felt threatened by the proposal," he told the Longford Leader on Monday.
"With 48 submissions, they can't possibly ignore the major concerns of the community now."
Residents are hopeful that the council will take their concerns into consideration.
“The location of that development means that building it could never be to the benefit of the community, only seeing more lives disrupted, more vacant buildings, more dangerous traffic where it can't be accommodated and serious risk to the efficient running of the cattle mart,” said Mr Clancy.
“Hopefully now they'll consider developing the land in Ballymahon that can actually take it, and is already zoned for it.
“That's if development is needed at all when you consider all the vacant over-store units along main street and the vacant estates in Legan and Kenagh.”
The 48 submissions came from residents as well as a number of local councillors, including Cllr Pat O'Toole, Cllr Mark Casey and Cllr Paul Ross.
Also backing the residents was the Longford/Westmeath Cattle Mart, which could face problems should another 39 houses be built behind it.
The council is set to make a decision on the planning application by September 7 next.