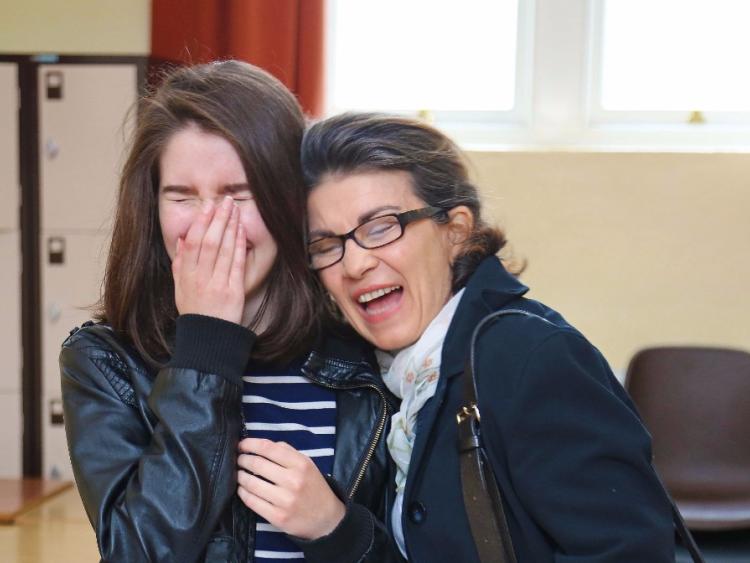 Maria and mum Leonie Holland, over the moon with Maria's results. Photo by Shelley Corcoran

The big day has arrived for 553 Leaving Certificate students around county Longford, as they head in to one of the county's nine secondary schools to collect their exam results and find out their fate.

There was a great buzz from 9am in schools this morning as students arrived in groups, or with family members to pick up their results, with many celebrating success.

"I'm nervous, but kind of excited. I'm waiting until I get home and then I'm  going to open the envelop with my family," said Emer Cahill outside Mercy Secondary School in Ballymahon, when the Longford Leader approached her.

"I'm hoping to study Law in Maynooth or Cork," she added, before heading back to the car, full of hope for her future.

Niamh Dennehy was next to come out of the school's reception, envelope in hand, but her views of the Leaving Cert were less than positive: "I think continuous assessment is the way to go," she told the Longford Leader. "The Leaving Cert is horrible. It's just awful. It's just like this big ominous black cloud and if they just dropped the hype, it would help with people's anxieties and they wouldn't be so worried about it and would do better."

St. Mel's student Tomás Skelly was delighted with his results. As a musician, he's hoping to pursue music in college: "I had planned to do Economics in Trinity. The course is called BESS (Business, Economics and Social Studies), but I changed my mine last minute to music, based on the interview. And the interview went well," he said, adding that the course he wants to do is in BIMM, Dublin's Music College.

Scoil Mhuire Principal Aoife Mulrennan was delighted with the results received by just over 90 girls in the Leaving Cert class this year.

"We had 30 per cent of the girls getting just over 400 points and 15 per cent getting over the 500 mark. A lot of them are very happy with their results," Ms Mulrennan told the Longford Leader.

"We had huge levels of attainment in the three core areas of English, Irish and Maths - 100 per cent attainment across those three in the higher level, which was phenomenal success for the girls, so we're very proud of them, very happy, and we hope that the postman brings them good news on Monday."

The new grading scheme was brought in this year, replacing the old familiar A1, B2, C3, etc grades with grades ranging from H1 to H8 for higher level subjects and O1 to O8 for ordinary level subjects.

Each level is separated by margins of 10 percent, meaning a grade of between 90 and 100 percent will receive a grade of H1 for higher level and O1 for ordinary; 80 to 89 per cent grades will receive a H2 or O2, and so on.

"The only people that are confused by the new system are the ones that are used to using the older marking system," said Ms Mulrennan.

"The girls have always been using that since they went into senior cycle, so it was very familiar to them when they opened their envelopes. But I would have had issues - it's something new and it's a change, so I would have found it difficult this morning just to adjust conception of it," she added, laughing when the Leader suggested that calculating the results was almost like an exam in itself.

Overall, there are many very happy students around the county of Longford today, with high hopes for good news on Monday when CAO offers will be sent out.

But for those who did not get the points for their first choice on the CAO form, or who are feeling overwhelmed or anxious about the whole thing, there is a support hotline set up specifically for Leaving Cert students.