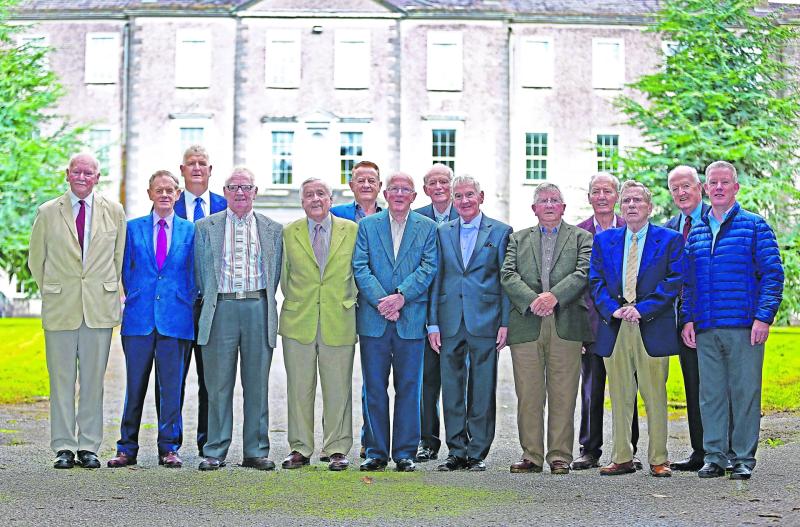 Romance and nostalgia were in rich supply last week as past pupils from St Mel’s College’s 1957 class celebrated their Diamond Jubilee reunion.

Former school friends came from Sligo, Dublin and even California for an occasion that was a relaxed, jovial affair.

Right from our arrival outside the college’s main entrance, warm embraces and friendly handshakes took precedence as past classmates relived former glories.

There was no shortage of humour either, borne out by the cry of “You’re a bit young to be here,” which was hurled in this reporter’s direction upon our arrival.

One of the first to greet us last Wednesday afternoon was Moyne native Eugene Redahan.

Well spoken and sporting a dapper cream blazer, the retired vet told of his own quiet sense of excitement in the lead up to last week’s gathering.

“It’s a long time 60 years and it went fast alright,” he casually chuckled.

Like many of his peers, Eugene entered the school in the early 50s as a boarder.

Away from the confines of the family home, it was a steep learning curve for many as the north Longfordian candidly attested to.

“It was a big change of course to come into a boarding school,” he explained.

“In September you weren’t really able to get home until Christmas which was a major event.

“The first few weeks was probably difficult enough to get to know people but after that it settled down and we probably became institutionalised.

“We had good memories. They were different times of course. We had corporal punishment, the usual, but we were taught well, we were disciplined well and by any standards we were probably fed quite well in the sense we got no junk food.”

A keen student of both history and English, Eugene took time to recall the educational grounding that came via the classical teachings of both Greek and Latin.

And while he confessed a sadness over their gradual displacement from mainstream curriculum, Eugene was conscious enough to draw his own conclusions as to the seismic changes that have taken place since his graduation six decades ago.

“It’s certainly more science orientated and of course the whole computerisation of everything has changed,” he said.

“One thing I will say though is books were very important at the time even in veterinary.

“Nowadays it’s all online of course and I think the whole IT thing has changed the whole picture.”

Standing close by was James Larkin, a former Longford Leader editor who went on to becomeBord Failté Public Relations Officer.

Casting a sentimental eye around the College’s front entrance, Mr Larkin admitted his five year spell at Mel’s was one he had a lot to be thankful for.

“At the time it gave people an education they wouldn’t otherwise have got.

“Parents in those days as in today always wanted the next generation to do better than themselves and this opened the door to that.”

Now residing in Shankill, Dublin, James did however tell of the disparity which existed between day pupils and their boarding counterparts back then.

“Being a day boy you didn’t have the same rapport as the fellas who were here as boarders.

“Denis Glennon [former principal, pupil and author of ‘Selected Memories’] even noted in his book that most of the pictures taken in the 40s and 50s excluded the day boys.”

James reflected on an unexpected opportunity to join the Leader as a ‘cub’ or trainee journalist in October 1956.

It all came about, according to James as a result of an impromptu conversation his late father had with some of its most senior personnel.

“In those days, opportunities were limited,” he added.

“And to be honest I was out that gate as fast as my legs could take me. My father was the waymaster and it was either Dan O’Brien or Mrs Farrell who spoke to him and asked.

“I remember jumping at the chance really because the prospect then of going on to third level was fairly slim and my parents couldn’t have afforded it.

“Academically I wasn’t going to be bright enough to come out of it with straight As so I was very happy to take it.”

Inside the college’s pastoral centre, which 60 years ago had been its main refectory, past schoolmates Benny Reid, Liam Foran and Niall Meagher could be seen locked in quiet conversation.

The latter, a native of Drumlish, had easily travelled the longest distance for the day’s celebrations, jetting in all the way from California.

“As long as I am still standing I wouldn’t have missed this,” he emotionally interjected in a north American tone.

Sipping casually on a cup of tea alongside his two classmates, Niall said the confined circumstances of the day meant there wasn’t much by way of excitement to fill what were long and, at times, onerous days.

“I know that if we didn’t have football it would have been a dreary place,” he chirped.

“The football kept us going.”

While Benny pointed to doing his level best to “keep his head down” after enrolling in St Mel’s after completing his inter-cert, both Niall and Liam continued with their footballing tales from yesteryear.

“One of the things I remember most is trying to mark this fella on the football field which wasn’t an easy job,” said Liam, pointing a mischievous finger in the direction of his long time friend.
“We got stuck in alright.”

It was a statement which clearly roused another fleeting memory as Niall explained how those who were fortunate to make the St Mel’s football team were afforded special consideration.

“We had a tradition here on the morning of a game that the team got boiled eggs,” laughed Niall, prompting Liam to insist: “That’s how you knew you were on the team.”

Last Wednesday, for a few hours at least, the class of 1957 were on the same team each standing shoulder to shoulder in reticent appreciation of their time spent as St Mel’s College pupils.

A special Mass in remembrance of their 11 deceased classmates was led by Msgr Pat Early at the College Chapel followed by a re-union lunch at Longford Rugby Club.