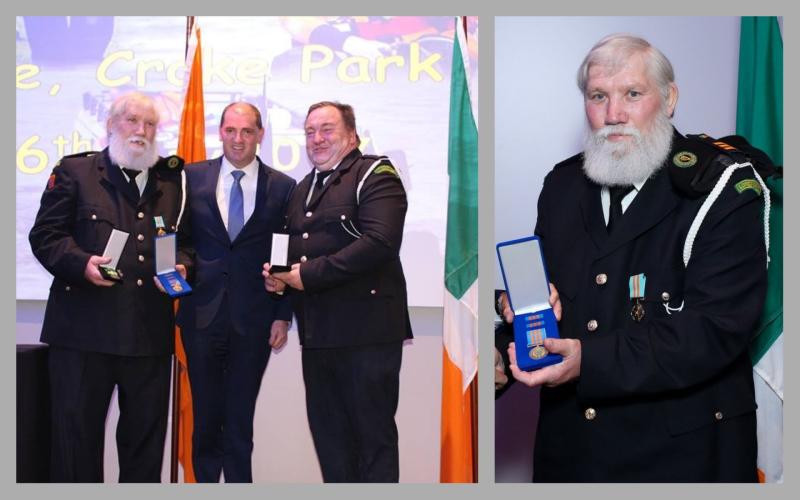 The late Stephen McKenna of Soran, Ballinalee has been described as a ‘great volunteer and dear friend’ in a poignant tribute from his long-time Longford Civil Defence colleague, Seamus Kiernan.

Stephen, who last May was honoured in Croke Park and received a Thirty Years Civil Defence Distinguished Service Medal from Minister for Defence Paul Kehoe TD, sadly passed to his eternal reward on Wednesday, August 2 at the Midland Regional Hospital, Mullingar, following a short illness that was bravely borne.

The vast number of mourners that called to the McKenna household over the past two days to pay their respects is testament to the huge esteem in which the larger than life Stephen was held by all who had the privilege to know and meet him.

Longford Civil Defence Officer Seamus Kiernan said the late Stephen McKenna was ‘a very committed’ Civil Defence member. “He was always available to lend a helping hand in any situation. Our ‘gentle giant’ epitomised everything that is good about Civil Defence. A long serving member of over 30 years, Stephen took part in nearly every duty that Longford Civil Defence were involved in during that time.”

Whether it was on a big match day, festival, special occasion, on a search mission or assisting those stricken by the recent flooding events, Stephen had a word for everyone and his genial personality endeared him to people from near and far. Mr Kiernan recalled, “His courteous manner while on duty with Civil Defence was a shining example to his fellow members and the public alike.”

The possessor of a great sense of humour, and instantly recognisable with his flowing white beard, Stephen donned the red suit and generously played ‘Santa’ during many local Christmas events and providing many children with lots of cherished festive memories.

As Mr Kiernan remembered, “Stephen’s wit and turn of phrase was legendary and there were many times he would brighten up a dull event with a funny comment or phrase. Every county needs a person like Stephen, someone to lift the spirits and make our lives so much more enjoyable.”

An accomplished and popular bus driver, Stephen brought these skills to excellent use when on duty with Longford Civil Defence. Mr Kiernan remarked, “An experienced driver, Stephen often brought our crews to and from an event or duty safely and one always knew the crew were in safe hands while in transit.”

Stephen was immensely proud last May to receive his 30 Year Long Service Medal from the Minister for Defence Mr Paul Kehoe TD at the National Medals Ceremony in Croke Park.

Remembering the event, Mr Kiernan said, “While still battling illness, Stephen courageously went to the ceremony and we all watched as he proudly accepted his Medal from the Minister. He quipped when he came off the stage ‘I'm one of the few Longford people to be presented with a medal in Croke Park’. That was typical of his spirit.”

Mr Kiernan concluded, “Longford is a much poorer place following Stephen’s passing and Civil Defence here have lost not alone a great volunteer but also a true friend to every member.”

May he Rest In Peace

Funeral Arrangements can be found here