Drumlish native opens up about living with a disability 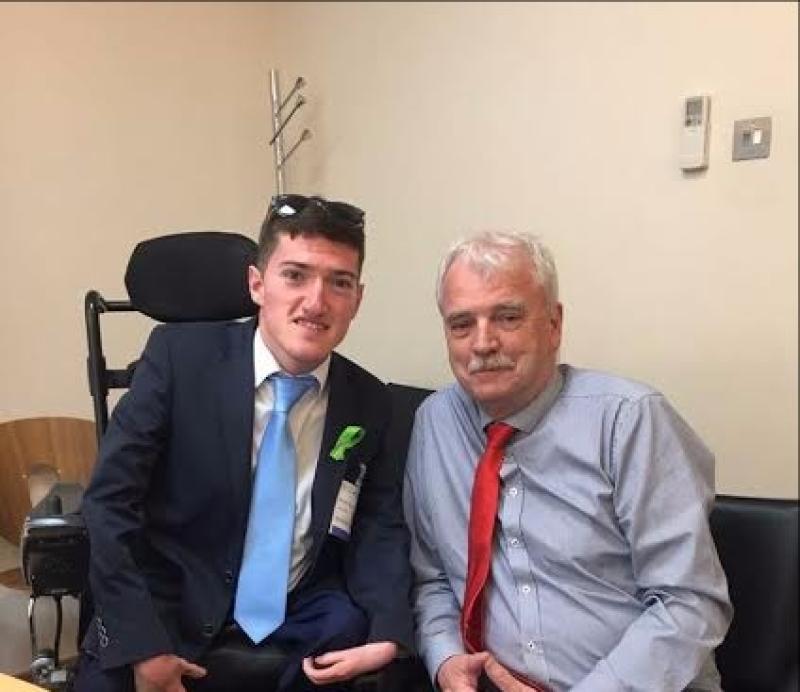 The only way is up for one Longford man despite living with a disability.

James Cawley, from Drumlish was born with a disability that affects his upper and lower limbs and is now a wheelchair-user.

He graduated with a first-class honours degree in Education and has been teaching in his first job for the past year.

The Co Longford native has also recently taken on a new part-time role with the Department of Justice.

Born with a physical disability called Arthrogryposis Multiplex Congentia (AMC ) which affects his upper and lower limbs and spinal cord, James is now confined to a wheelchair.

“I can use my hands and legs but they’re fixed in position, with almost no movement in my left hand,” he told the Leader this week, before pointing out his secondary disability - scoliosis of the spine, and osteoporosis which he got from sitting down all the time.

“Because of this I attend services such as physiotherapy and have a personal assistant (PA), Peter Kirk.”

Peter is a vital cog in the wheel of James’ efforts to live independently.

The PA assists the Drumlish man with day to day tasks including dressing, washing, cooking, cleaning, getting out of bed in the morning, etc.

“I can’t imagine my life without a PA,” continued James.

“People sometimes underestimate the role of a PA in my life, but the reality is that Peter Kirk has become an invaluable support to me as have PAs in the life of other people with disabilities who want to live independently.”

Indeed, much of what able-bodied people take for granted every day, has been hard fought for by James as he continues to live with AMC.

And, as the newly appointed chairperson of the Arthrogryposis Association of Ireland, he hosted the hugely successful ‘Big Blue Celebration’ in Drumlish last month and last year ran a social media campaign in which everyone wore blue and posted all of their photos onto facebook with the hashtag #WearBlueForAMC.

“This,” he added, “was done on international AMC awareness day which falls on June 30 each year.”
As a child, James began his schooling in mainstream education at the local national school in Drumlish.

At the time he was supported by a Special Needs Assistant (SNA), Breege McGee.

“Breege was there with me every step of the way, right through primary school and then during my secondary education at Moyne Community School,” he recalled speaking to the Leader this week.

After doing the Leaving Certificate, he applied to Maynooth University through the Disability Access Route to Education (DARE) where he eventually obtained a BA in Geography and Business.

“University life was difficult for me at the beginning,” he said, before pointing to the massive transition he endured from moving away from the family home to taking on a degree, while at the same time endeavouring to live independently with the support of personal assistants.

“I had concerns around whether or not I was going to be able to live the student life and later get full employment.

“But after a brief settling in period, I mixed in well and joined many clubs and societies allowing me to fully embrace student life.”

Meanwhile, James now recommends university life to anyone lucky enough to be given the opportunity to involve themselves.

“It helped me develop vital skills as a person and enabled me to work towards my goal of becoming a teacher,” he continued.

James graduated with First Class Honours in a Professional Masters of Education recently and now teaches at Maynooth Community College.

He loves teaching and feels that he now has an opportunity to ‘give back’ and be a positive role model for young people.

James Cawley has been making national waves in the field of advocacy over the last couple of years and most especially in the area for people with disabilities.

It is this work that brought him to the notice of the Minister for Disability, Finian McGrath who recently appointed him to a part time research position at Leinster House for the summer months.

“When I got my chance with the Minister, I dropped him my CV and asked for a summer job, so he gave me the challenge of assessing and researching all accessibility in Ireland, mainly looking at access with regard to transport, leisure activities, concert venues, restaurants, pubs, clubs and increasing people with disabilities’ participation in employment to 6%,” he confirmed.

James will continue to teach along side this new role in the Department.

“Disability shouldn’t hold anyone back,” he added.

“I think if we want to increase the percentage of disabled people in the labour force we need to break down the barriers for them.

“If we normalise disabled people in the workforce it increases the awareness of people’s ability and skills.

“People with disabilities have a right to be supported because without personal assistants they have to rely on family and friends to help them live an independent life. My advice to anyone facing adversity is to focus on your abilities, have dreams and make them happen; be a strong advocate for yourself and ensure your needs are being fulfilled.

“The only disability in life is a bad attitude!”