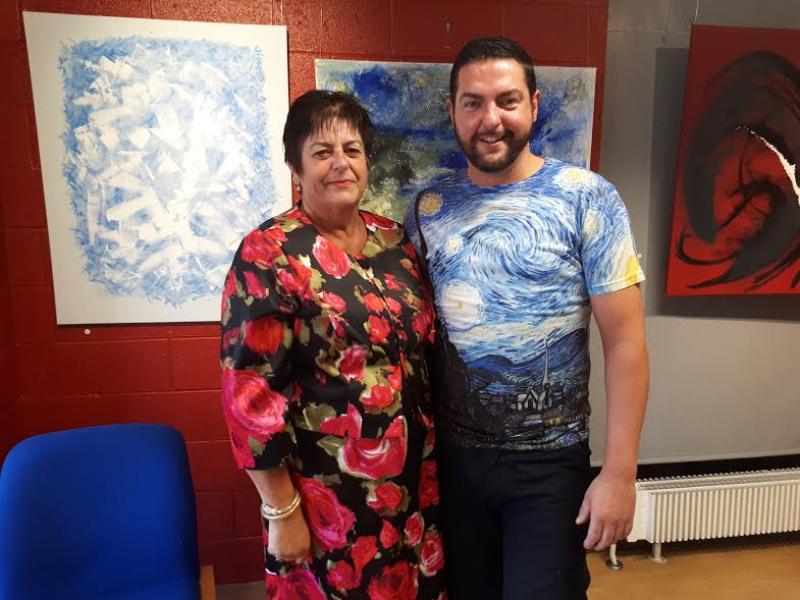 There was a great turnout at Longford Co Library last Wednesday night for the launch of artist Ambroise Donnelle’s art exhibition ‘Reborn’.

Mr Donnelle’s mother, Ann was born in 1950 at the mother and baby home in Castlepollard, and this latest exhibition from the well established artist explores the country’s dark history in respect of those institutions.

Speaking during the launch, Mr Donnelle said it was important not to lay all the blame with the religious orders because the families that sent their daughters into those institutions in the first instance also bore responsibility.

“I’m not standing here this evening to solely hold all the blame on the nuns and mother superiors of the mother and baby homes,” he added.

“But it was also a time in Catholic Ireland in the last centuries that families allowed their daughters to be part of these institutions, so they are to be held accountable also.

“Forced into adoption and severely malnourished, my mother survived this place she was born into, but unfortunately there are so many infants who never got to share this.”

Exhibition ‘'Reborn', is inspired by Ambroise's mother Ann who was born at the Co Westmeath home 67 years ago.

“We are alike in so many ways; she even likes to dabble in pastels and watercolours occasionally - so the apple doesn't fall far from the tree!”

As a child, Mr Donnelle often showed his mother his crayon drawings and felt a sense of contentment when she praised his work.

She has and continues to be a huge source of inspiration to him.

He has always been close to his mother and when as a child, he learned the story of her heritage, it struck a creative chord deep within him.

“The main point of this exhibition is to highlight the fact that they still have not set a date in Northern Ireland for a full public inquiry into this whole issue; yet a date has been set in the Republic,” he continued.

“The Government in Northern Ireland needs to act fast to catch up with the Republic so that this complete injustice can be addressed immediately.”

The talented artist went on to say that there was no longer time for hypocrisy and denial.

The time has now come, he added, to get justice for the hundreds of children that we now know were left in un-named graves.

“This is an ongoing cause of concern for me and is primarily expressed in my artwork,” he said.

“Out of darkness there will always be light - this must always shine through in the end.”