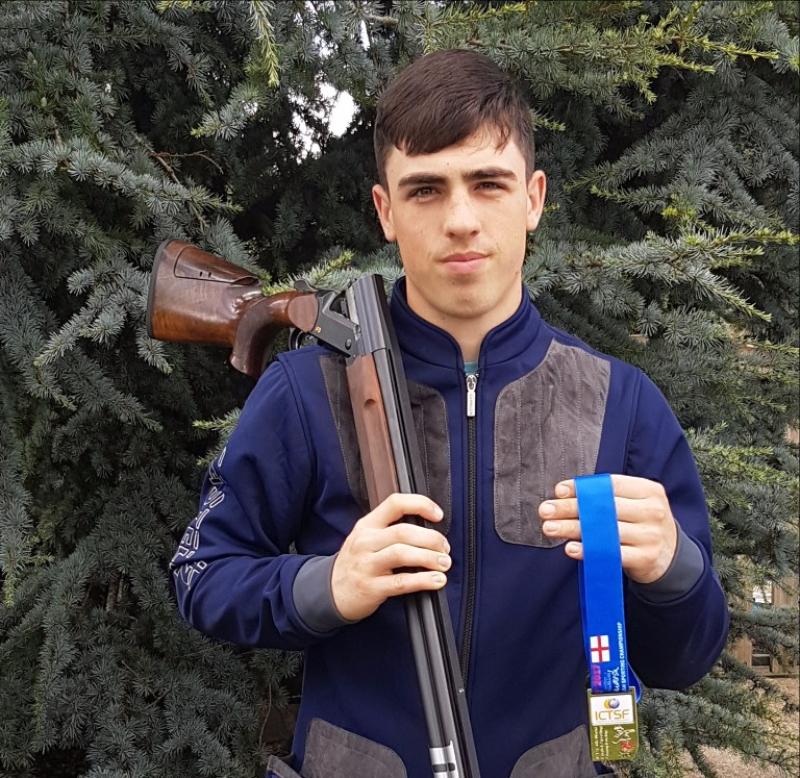 Nineteen-year-old Cian McLoughlin from Mostrim beamed with pride on the weekend of July 15 & 16 when he won a silver medal for clay target shooting at the 2017 ICTSF World English Sporting Championships in Kelmarsh, England.

Cian was part of a 3-man Junior (U-21) team who took part in two-day competition with 100 targets each day.

Cian McLoughlin, Ryan Byrne (Louth) and Eoin Finnegan (Monaghan) competed against some the world’s best shooters to come runners up to a very strong English team.

The full Irish team comprising of 18 shooters were representing the Irish Clay Target Shooting Association (ICTSA) at the event in Kelmarsh and were successful in taking home 14 medals over the 4-day competition.

This world championship medal was the third medal win for Cian over the past number of weeks, adding to his runner up finish in the Irish Open by one target, and his successful retention of his title at the NARGC (National Association of Regional Game Councils) All-Ireland U 21 Championship in Ardee (July 8 & 9). He was also part of the Mostrim Gun Club and the Longford County team who competed in the All-Ireland at Ardee.

Cian, who is a Mechanical Engineering student at Sligo IT, is also a well-known hurling player who plays with the Wolfe Tones hurling club, along with Sligo IT and Co Longford Senior team. Having to balance his two chosen sports is a major challenge but he is determined to stay committed to both.

Cian was part of the Sligo IT scholarship programme for shooting and recently he has secured a generous sponsorship deal from David Mulvihill of Mulvihill Firearms in Ballymahon. Without this valued support, Cian would not be able to keep up these sports to the level it requires.

Cian says both sports complement each other as the fitness, eye to hand co-ordination, fast reactions and sharpness are vital to both.

The ICTSA (Irish Clay Target Shooting Association) have brought in multi time world shooting champion, Ben Hushwaite, to give coaching to the Irish shooters and this has been very beneficial to Cian.

Cian will represent Ireland again at the Home Internationals Skeet competition in Dungannon at the end of August and he is currently trying to secure his place for the Sporting Home Internationals, which will take place in September.

Cian is wished every success in his endeavours.