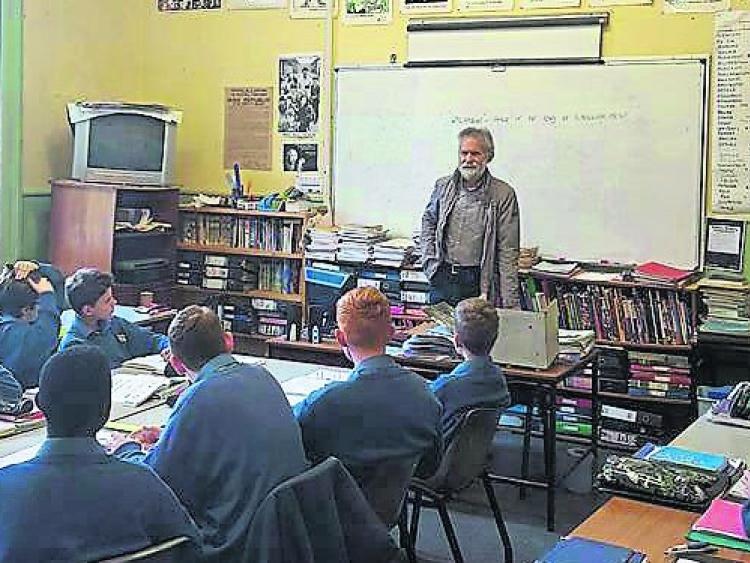 The old adage of ‘all good things must come to an end’ certainly rang true along the corridors of St Mel’s College recently as long serving staff member Jimmy Waldron stepped down after almost four decades of service.

A modest part of the St Mel’s furniture for the past 39 years, the proud Co Roscommon man was given a rapturous send off as students paid tribute to the well respected English and history teacher.

As a post on the college’s Facebook page at the time intimated, the occasion was somewhat “bittersweet” in light of the impending start of the summer holidays.

“We all learned from him and are all the better for knowing and interacting with him - staff and students alike,” the school said in a statement.

Its principal Declan Rowley admitted replacing such a polished and seasoned teaching professional would not come easy to the Longford town based school.

“It’s the end of an era and he (Mr Waldron) will be a big loss,” he said, ahead of paying testimony to his former colleague’s unique teaching style.

“He was deeply respected and had a different style about him.

“But he had a great love of teaching and was often the last out in the evenings.

“As they say life goes on and somebody no doubt will come in and put their own stamp on things.”

For the man himself, the prospect of having extra time on his hands is something the father of two is quite philosophical about.

“At times like this it’s often said ‘oh, well you will be taking up golf or going on long international travel,” he said.

“But I can say I have absolutely no intention of doing that, but I will be indulging in a bit of gardening.”

The Athleague resident’s take on the changes he has witnessed over his near four decade long career are mixed.

The advent of a more diverse and multi-cultural classroom are modernisations he gave particular mention to.

Other changes, most notably related to curriculum based alterations were not met with the same sense of gusto however.

Much of that cynicism was levelled at the lengthening gulf between the incumbent Junior Cert programme and that of Higher Level Leaving Cert English.

“I can’t say I am wholly enthusiastic about what the Department of Education have been doing with English because in my view that has been a complete disaster,” he sternly contended.

That, of course, is of little concern to the newly enrolled retiree as he heaped praise on his former pupils and colleagues.
“I’ll miss them,” he simply put it.

“I must also thank everyone for their good wishes, the many cards and gifts that I received.

“But yes, I will miss it and by and large the St Mel’s lads were fantastic.”