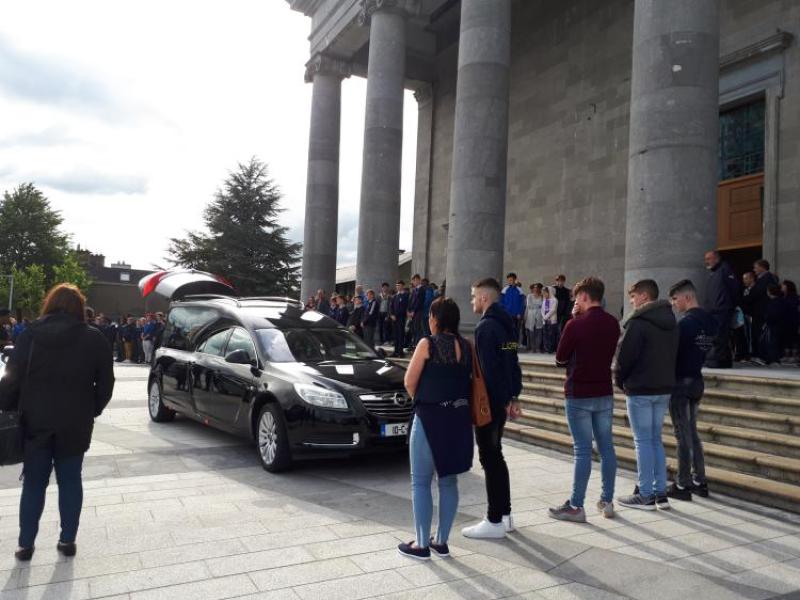 A guard of honour for Damola at St Mel's Cathedral, Longford

The funeral has taken place in Longford town of Damola Adetosoye, the 17-year-old teenager who died while swimming with friends at Tarmonbarry Harbour last Thursday.

St Mel’s Cathedral was packed to capacity as those who knew the youth and his family, gathered together to bid a final farewell to a young man, whom the congregation heard, “enjoyed life to the full”.

Students from Templemichael College, where Damola was a student, brought a number of Gifts to the altar including the teenager’s cap depicting his fashion sense; a trophy that his soccer team recently won and a book to represent his academic achievements.

Damola was a member of Camlin United Football Club and played football with Clonguish GAA.

Chief celebrant Fr Joseph Okere, said Damola was a wonderful young man who not only enjoyed his life, but had also lived it to the full.

“When a child dies we lose a future,” said the priest, before adding that all was not lost, however, because Damola’s family and friends each had a very significant part to play in the teenager’s life story.

“Damola has given us 17 golden years of peace, of joy and of time.

“So, it is not so much about the future but about how we move forward each day.”

Fr Okere went on to say that young people understood very well the importance of facing each day as it comes, and how to use their sense of adventure to enjoy every day that their lives had to offer, while at the same time living well.

“Damola too enjoyed his life,” the priest continued, before pointing out that the teenager had lived each day of his life to the full for 17 years.

Those gathered heard that Damola was a kind, intelligent and helpful young man who loved his parents, siblings, extended family and his friends.

He was a bright teenager who had plenty of good friends and was extremely popular and well liked.

The emotional scenes at the Funeral Mass this morning bore testament to that.

“Damola died while living his life to the full,” Fr Orkere added, before students from Templemichael College conducted the Prayers of the Faithful.

The teenager was later laid to rest in Ballymacormack Cemetery surrounded by those who who loved him dearly.

Damola Adetosoye is survived by his mother Helen, father Adekunle, brothers Victor and Aaron, sisters Mercy and Sharon; his extended family and a host of good friends.

For more on this story see next week’s Longford Leader on sale Wednesday.