Emotional scenes in Newtowncashel as Andrew Rowan is laid to rest 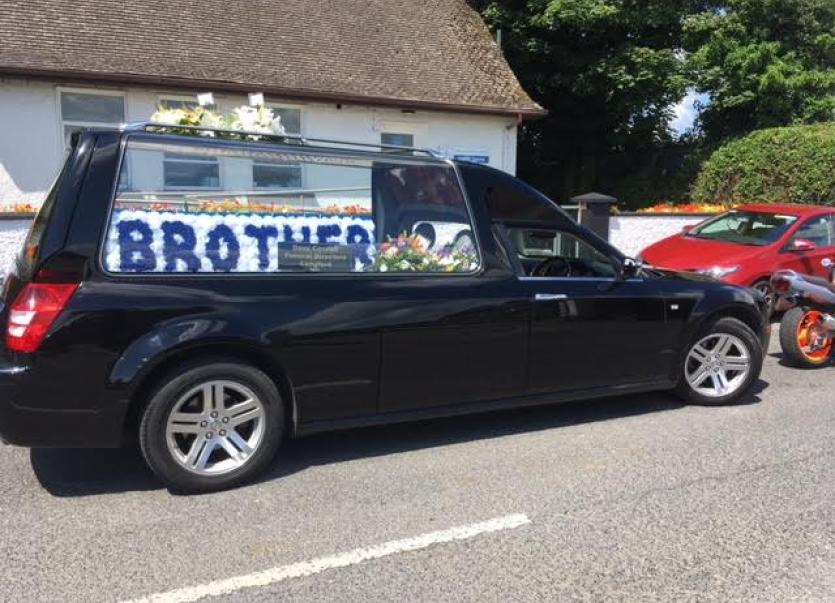 There were emotional scenes at St Mary’s Church, Newtowncashel last Wednesday as the remains of 26-year-old Andrew Rowan arrived for Funeral Mass.

Andrew’s coffin which was flanked by his family and friends, made its final journey from the young man’s home nearby, after he died in a motorcycle accident on Saturday night week close to The Pigeons outside of Athlone.

Chief celebrant Fr Merlyn Kenny said that while he was new to the parish of 'Cashel, and didn’t know Andrew all that well, anytime the pair met, Fr Kenny received a “hearty wave” from the young man.

“What you saw, was what you got with Andrew, smiled the Parish Priest.

“Andrew was straight and honest with you and that was a wonderful way to be.”

Meanwhile, the congregation heard about the south Longford man’s love for machinery particularly diggers and motorbikes.

In testament to that, the funeral cortege was accompanied by dozens of motorcycles and their drivers to the church.

Andrew’s helmet alongside a model digger and model motorbike were also placed on the coffin as it was received close to the altar before the Mass began.

Those gathered for the heartbreaking Funeral Mass heard that Andrew had recently started a new job as a digger operator and had subsequently received his first paycheque from the company on the Thursday prior to his death.

“Andrew had a great sense of humour,” continued Fr Kenny who was assisted by Fr Séan Casey and a third member of the clergy who was related to the Rowan family.

“He was a very kind lad and would go out of his way to help you.”

The congregation also heard that Andrew had a close bond with his late grandmother Nora.

Nora passed away only two years ago and as she entered a certain level of forgetfulness towards the end, she never forgot Andrew.

“She could forget everyone else, but if Andrew was near, she would get out her purse,” smiled Fr Kenny.

“She had a subtle way about her and Andrew held that bond with his grandmother deep down in his heart.”

The parish priest also mentioned the close friendship that Andrew Rowan had with his cousin who sadly passed away just two and a half years ago.

“Every moment is so precious,” continued Fr Kenny as he offered words of comfort to the Rowan family.

“Your dignity and your courage as you carry this cross is evident and I want to thank you for sharing all your beautiful stories about Andrew with me.

“Because of the way in which you shared those stories, I feel like I know Andrew personally.

“With simple gestures and simple words we do not realise the power that we have; we take the Rowan family into our hearts and support them in any way we can.”

The 26-year-old Newtowncashel man was later laid to rest as the sun shone down on ‘Cashel Cemetery with his mother Margaret, father Tom, sister Susan, brother Tomas and all his relatives and friends by his side.