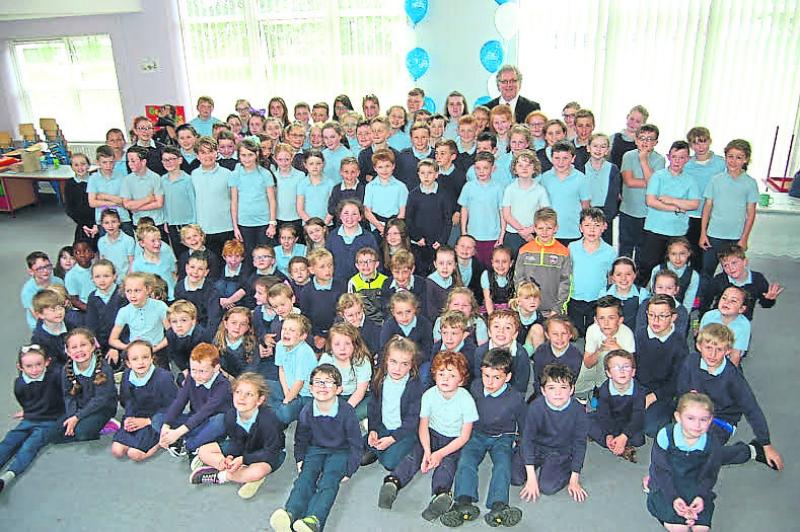 Fintan Farrelly with the pupils in Kenagh

Starting out in 1982, Mr Farrelly began his teaching career at the Marist Primary in Athlone and then St Michael’s BNS in Longford town.

From there he took up a position at Melview NS and on Tuesday, September 1, 1998 he was appointed principal of St Dominic’s NS in Kenagh.

Nearly 20 years on, the former principal says little did he know at the time what a “roller coaster ride” he was in for.

He has also seen many changes in the rural education system and back in 1998 St Dominic’s was a four teacher school with between 80 and 90 pupils.

“The children of yesteryear and today are not that very different but the issues schools have to face have changed,” he told the Leader this week.

“In the past teaching was a profession that was stable, relatively unchanging and almost predictable.

“The work to be done was more or less defined and allowed teachers to be as creative and innovative as they wanted to be.

“Creativity and innovation is being squeezed out, the only marker nowadays being what wonder one can pull from some deep-hidden source on the World Wide Web!”.

Meanwhile, Mr Farrelly also alluded to the fact that while child-rearing practices changed in the intervening years, so to did the curriculum and teaching methods.

“Children having access to mobile phones, snapchat groups and social media is an issue even in primary schools,” he added, before pointing out that there was an expectation that all society’s ills should be fixed in school.

“Being a teaching principal - you are not just a principal but a full‐time teacher as well, so in essence you are in fact double jobbing.”

Enrolment in St Dominic’s has now doubled from those early days with the influx of new people into the village, and that growth continues with each passing year.

A three classroom extension was added in 2009 and Mr Farrelly believes a further extension will soon be necessary to accommodate pupils.

The teaching staff has also grown and the school now has seven teachers, two SEN teachers and a full-time SNA.

“Gone are the days of the chalk, blackboards and deilbhíní,” smiled Mr Farrelly before adding, “St Dominic’s has embraced information technology and with the development of ICT each classroom now has an interactive whiteboard, broadband, laptops, an iPad and wi-fi”.

He added, “I believe a primary school can have an enormous influence on a small parish; most people remember more about their primary school days than about any other period of their lives, and this may be due to the impressionability of all of us at a young age”.

Mr Farrelly went on to say that the greatest resource any school could have was its staff and pupils.

“At St Dominic’s we have a very committed and dedicated staff and great pupils, and I’d like to pay tribute to my colleagues past and present,” he continued.

“St Dominic’s NS would not be the place it is without the ongoing and wonderful work of its staff who consistently strive to build the best learning opportunities and outcomes for our students.

“I want to take the opportunity to thank all our staff and I will always remember our shared laughter in the staff room, our joys as well as our struggles. I thank you for your dedication, support and friendship.”

Mr Farrelly then acknowledged the parents and the role they have played in his life as principal of St Dominic’s.

“Parents, past and present, I want to thank you for bringing your children to our school and trusting us with them every day,” he added.

“The strong partnership between home and school is an important relationship which we continually strive to nurture.

“The children in this school are polite, well-behaved and talented and long may the positive relationship with parents continue during their child’s journey here, so that we all can continue to enhance and build this great school we have.”

Mr Farrelly then pointed to the wonderful work of the Parent’s Association and their support to him as principal.

“In Kenagh we are fortunate to have a great Parents’ Association and I’d like to acknowledge the work and effort of its hardworking committee and members.

“They provide refreshments after school events and liturgies, organise swimming lessons in conjunction with the teachers, provide treats for the children during the year – drumming, dance and Young Einstein workshops, visit of mobile planetarium, circus visits, reptile visits,” he said before pointing to the Association’s “vital link” in work that continues to build strong partnerships between home and school.

“I look back with gratitude,” smiled Mr Farrelly as he recalled his years teaching.

“I entered a profession dedicated to assisting young people achieve their potential and to help them find their best selves.

“As I leave it, many memories will live on in my sense of achievements including the many beautiful and moving musical occasions including liturgical celebrations; Hallelujah concerts; National Children’s Choir events every two years; the production of a Millennium CD; nativity plays; talent shows; Euro Child projects; participation in Aisling Children’s Festival and School concerts.

“The trouble with retirement is that you never get a day off and while I’m looking forward to retirement, I’m also experiencing a sense of loss or change.

“It’s hard to believe this day has finally come and I am sad to be leaving behind what has been such an important part of my life.

“I am in no doubt, however, that this school and its pupils are in very capable hands.

“While the challenges ahead are formidable, they always have been and I believe handing over to the new principal in September will be a smooth transition.

“Being Principal has been an experience, always challenging, often difficult, but never boring, very much a learning experience in itself; I have run the best race I could and it has been an honour and a privilege.” 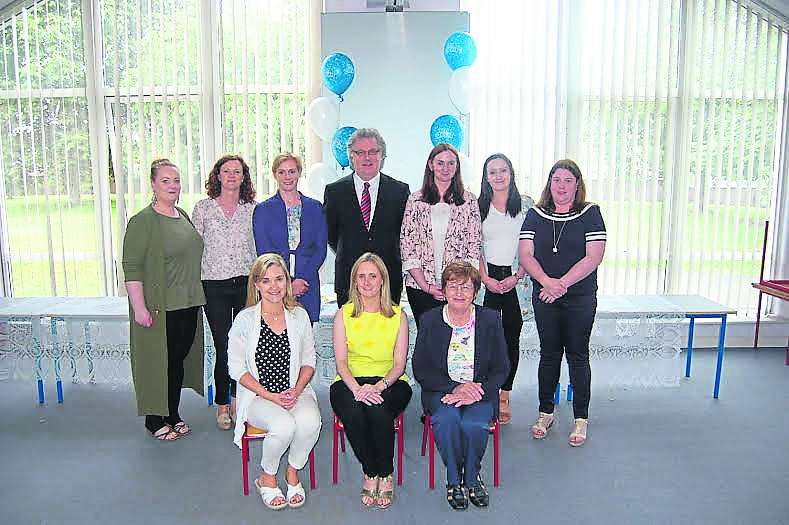