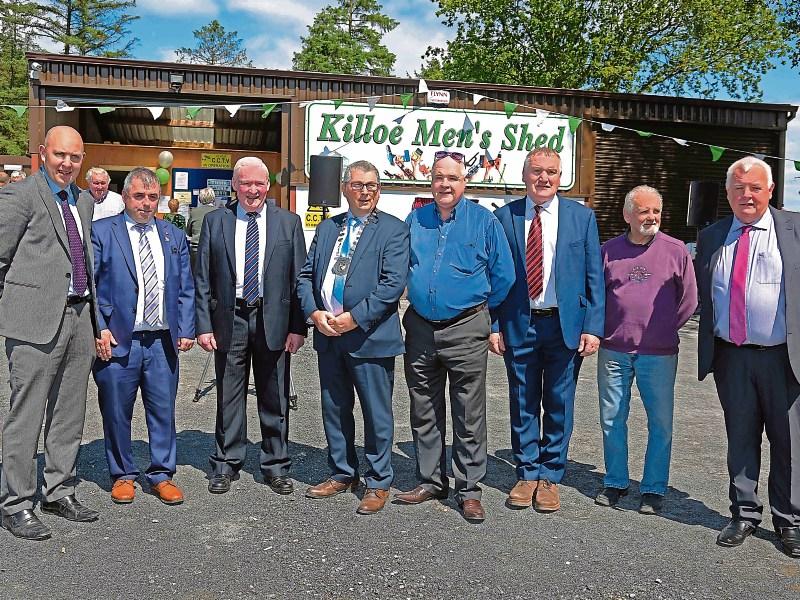 The who's who of political, community and religious life gathered together in the sunshine at Kiltyreher last  Friday afternoon where Killoe Men's Shed was officially opened by former owner and editor of the Longford Leader, Eugene McGee.

“This is a very simple idea and one which means that people who mightn't be mad to go out and prefer to stay at home, especially on winter nights, can have a reason now to come out,” said Mr McGee.

“They can see their neighbours, have a chat, read the paper - whatever it is - and this is only the start!

“It just shows you what can be done.”

Killoe Men's Shed was set up as a Health and Wellbeing project promoted by Killoe GAA back in January.

A committee was elected and Frank Kiernan became chairman while secretary was Sean Murray and the new treasurer was PJ Quinn.

“I was involved in one of these men’s clubs down in Kerry with Paidi O’Shea back about 20 years ago and they really are a great initiative,” continued Mr McGee before pointing to the wonderful garden of crops that the men of Killoe had sewn.

“I don’t know when I last saw a field of spuds like that - maybe when I was growing up,” laughed the Colmcille man who brought Offaly to All-Ireland glory in 1982.

“There are lots of men here, I am sure, that haven’t been involved in gardening for maybe several years and I know now the excitement they will feel when all the crops come to life.

“Men’s shed helps to get men in the community involved again.”

Killoe Men’s Shed members recently assisted at the Terry Mc Cormack cycle and there has already been two fundraisers locally - at the Olde Forge and in Begleys Bar.

Mr McGee then spoke about how Mr Kiernan and others joined forces and purchased the tools that belonged to the late PJ Fallon.

Those tools are now housed at the new Men’s Shed in Killoe where it is widely believed they will be put to good use!

“Men’s Shed will help to alleviate loneliness too and that is a great thing.” added Mr McGee.

“All age groups of men can come here and I know that this will strengthen this parish.

“The GAA has always been involved in the Men’s Shed initiative and without the GAA in rural Ireland, rural Ireland would be dead.”

Members meet weekly - every Thursday night -  at their new shed and new members are always welcome.