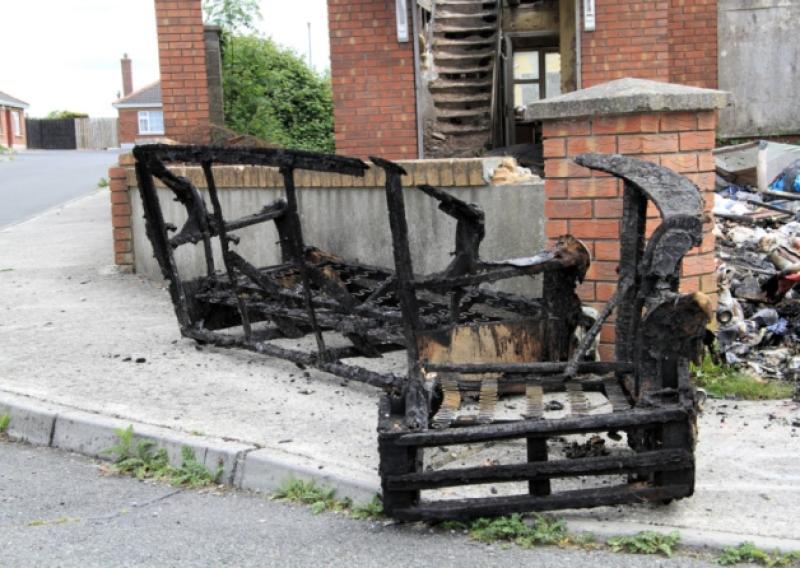 A file photo of a burnt out sofa found strewn outside a house in the Palace Crescent area of Longford town.

A number of families have been "run out" of one of Longford town's most troublesome anti social behaviour blackspots while a clutch of others are "living in fear".

That was the disquieting claims aired by Cllr Peggy Nolan at a Joint Policing Committee (JPC) meeting in Longford this afternoon.

She told of how some law abiding citizens had been effectively forced to sell up and leave their homes in the greater Ardnacassa area of town due to intimidation.

Cllr Nolan said the level of duress felt by certain sections of the community had forced at least one family to effectively abandon their home.

"There are people down there who have taken out mortgages, who are to the pin of their collar but are living in fear," she maintained.

"There have been people in their 50s and 60s who have been run out of there as well.

"One family I know of are living between relations because they are trying to limit the amount of time they spend in their home."

The more concise nature of that blueprint aimed at tackling he Ardnacassa Avenue, Palace Crescent and Grian Ard areas had been identified at a previous meeting in April.

She, like Cllr Seamus Butler, asked why councillors had not been invited to a consultative meeting between the Council, local gardaí and local residents at the end of May.

Supt Jim Delaney attempted to downplay any ill-feeling from the committee's elected members, insisting there had been "no concerted effort" to exclude anyone from the talks.

And he said contrary to what had been voiced publicly, the reality facing crime enforcement agencies like the Gardaí was an altogether different matter.

Evidence of this, he said, was in the complete absence of investigations which had been launched in relation to intimidation in the area.

"I haven't seen any investigation files since I came to Longford back in August and any that we could progress to the Director of Public Prosecutions (DPP)," he said.

Supt Delaney admitted that while he was conscious of the issues confronting hard pressed homeowners, solving those dilemmas required a far-reaching approach.

"I am fully aware of the acute problems that are up there," he said.

"But it's not possible to fix them overnight and if we want real results it will take time."