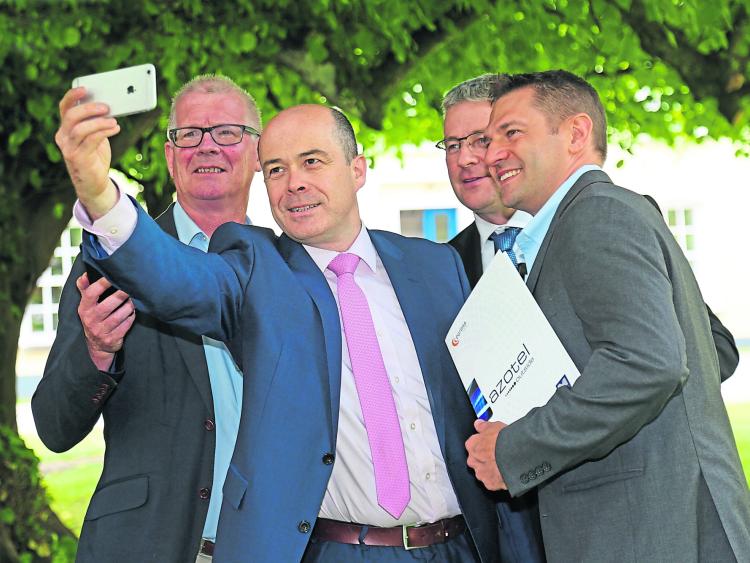 Let me take a selfie. The launch of Medusa at Viewmount House. Photo: Shelley Corcoran

A County Cavan based wireless broadband internet provider believes the launch of its new pioneering technology, Medusa is “the magic bullet” to change the face of Longford and rural Ireland for the better.

Barry Wilson, country manager with Eurona Ireland said the introduction of the new product, which has the ability to quadruple capacity levels, will open up new, previously unattainable possibilities.

He said the addition of Medusa under the guise of Cambium Networks, a leading global provider of trusted wireless solutions, was particularly significant.

“Customer needs and expectations are growing at a phenomenal rate, most recently through the advent of high definition and ipt tv,” he said.

“It’s a huge challenge and we need a way to meet this challenge. Cambium networks have delivered the goods and the rollout of Medusa across our networks has already allowed us to give our customers the product and choices they require.”

Mr Wilson said Medusa would offer subscribers download speeds of up to 50mb while at the same time offering up greater capability margins.

“One of the beauties of Medusa is its back up capacity,” he said.

“It really means we don’t have to strip out an existing customer’s hardware and replace it with expensive new gear.
“All we do is a simple software update and we are good to go.

“Medusa offers four times the capacity of what we previously had available and up to ten times what is available on other networks.

The launch, which took place at Longford’s Viewmount House, was also attended by Minister for Communications Denis Naughten.

In between joking about how the ongoing frenzy surrounding former Attorney General Mairé Whelan’s appointment to the Court of Appeal might hasten an early exit back to Dublin, Mr Naughten talked up the many benefits associated to Medusa.

“I don’t know whether I am going to be unemployed this evening or not….that’s the difficulty with a minority government, we have to be on stand by all the time you see.

“What I do think is broadband has the opportunity to unlock the full potential of Europe’s youngest population and exploit the innovation and ideas that are untapped in every single community throughout Ireland.”

To find out more on cambium networks, log on to http://www.cambiumnetworks.com/