Longford man's 'Concern' award is a tribute to Cashel 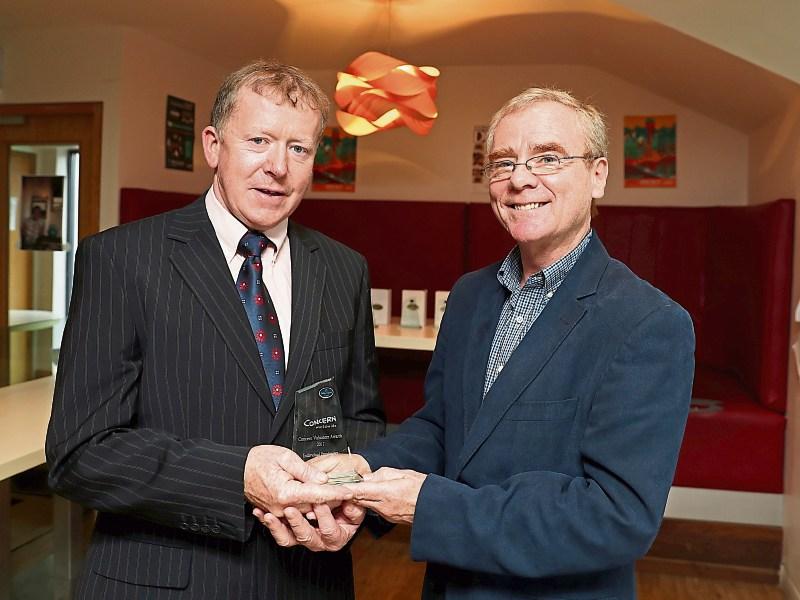 A Longford man has been applauded for his  charity work at the Concern Worldwide 2017 Volunteer Awards, which took place at the agency's head offices in Dublin on Saturday May 27 last.

Sean Casey from Newtowncashel received the Individual Fundraiser Award for his tireless work  fundraising for the annual Concern 24-hour Fast and fund raising.

Speaking to the Longford Leader about his award, Mr Casey said that it was really a testament to the people of Cashel for their wonderful support each year to the Concern fast and Church Gate Collection as well as his work colleagues at Bord Na Mona.

“It’s something we’ve been doing for over 30 years,” he added, keen to let the Longford Leader know that, although he was the recipient of the award, it was really the people of Cashel who were to be commended.

He went on to say that some of the people who have been involved from the beginning include Longford Leader photographer Declan Gilmore, later with JP Casey and Mattie Reid and in recent years Michael Casey Jr and David Hanley.

And, he said, it was important to mention his wife Mary, his daughter Ciara, and his son Niall, who have been pillars of support to him throughout his years of charity work and attended the ceremony with him.

Sean, who works at Bord na Mona, was inspired to volunteer locally with Concern after a four-year stint working in Africa.

I was sent over by Bord na Mona. I was helping with turf production and showing the people over there how to cut turf,” he said, smiling as the Leader took in this piece of information.

He laughed at a comment that this was probably the most Irish thing he could possibly do over in Africa: “You can’t get more Irish than that!”

Sean was sent to Burundi - a country in Central Africa - in 1982, along with, Jerry Carroll from Kildare to train the Burundian staff on harvesting sod turf: “We got to see first hand how poor these people really are.”

Africa, he said, was an incredible experience with many ups and downs: “It was a lonely life out there for four years, but it was very rewarding. The people were lovely, but the lifestyle was fairly primitive.

“The weather was fantastic. Africa is one of the top ten countries in the world in terms of climate. The only thing is, there were only 12 hours of light and then 12 hours of darkness. Come six o’clock in the evening, it was dark.

“But the weather was lovely. You’d never need a raincoat,” he added.

The dedication and commitment of Sean and his family to Concern in the local community is exceptional, and according to the CEO of Concern, Dominic MacSorley, the award was very well-deserved.

“Sean represents the best of Concern’s volunteer spirit and we are delighted that he is here along with his family to accept this award,” Mr MacSorley said at the ceremony.

Sean, of course, is honoured to have received the award but, again, puts this achievement down to the people of Cashel and his work colleagues for the generosity they show without hesitation at the local Concern events.

“We have raised in excess of €50,000 over the years which is fantastic for such a small place and we also have donors who give very generously each year.”

And, he adds, the good thing about Concern is that over 90% of the money raised through fundraising goes directly to charity. And that’s why he does what he does.

“The thing about charity is it’s not about an award. You don’t do it for glory,” he concluded.