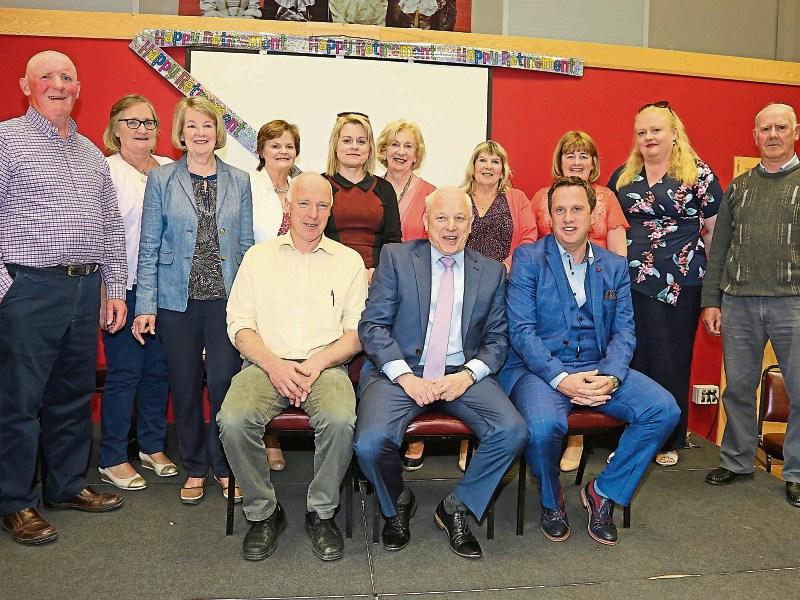 To spend the best part of four decades on the pay roster of the same organisation is something of a rarity in this day and age.

Given the still fragile nature of our economy, most of us are fortunate enough to enjoy even half of that continuance or uninterrupted term of employment.

One of the few to fall into that category is outgoing Chief Executive of St Christopher’s Services, Pat O’Toole.

The Forgney native formally brought the curtain down after 36 distinguished years with the voluntary service provider last Friday, 16 of which were spent as its most senior employee.

Understandably, the occasion was one which brought with it pride, emotion and more than a hint of melancholy.

In between attempting to declutter an office he has called his second home for the past decade and a half, Mr O’Toole cut a philosophical figure as reflected on his final day in the job last Friday.

“This morning at breakfast time at 8am I said to my wife Geraldine: ‘You know this will be the last time I will be doing this’,” he said, with a mix of gaiety and mild sadness.

“Me leaving the house at 8:30am and usually being home for around 6 or 6:30pm has been going on for 36 years so it certainly will hit.”

Looking back on such a lengthy career is not an easy assignment for even the most well-informed of individuals.

There are, as in Mr O’Toole’s case, plenty of highlights as there are some regrettable low points.

“I suppose you could carpentmentalise it into periods of five years,” he eloquently put it.

“There was money around which meant you were able to recruit, we were able to build new buildings and we were able to get capital to build houses so much so that we now have 16 houses  across the county and when we I came in we had just five service users, four or five staff and a budget to run the entire service of £40,000IR.

“We are at 170 plus staff now, we have about 200 service users between children and adults and a budget that’s over €9m.”

His appreciation of all those who served with him both within the service and voluntary members who toiled year after year in a bid to raise vital monies for its future are equally bountiful.

That said, Mr O’Toole who is also a serving county councillor is not one for shying away from the negatives.

The one which riles him most is the bitter taste that still lingers from funding fears in late 2013 which ultimately forced 3,000 people to protest through the streets of Longford town.

“It was (a low point),” he stoically confided.

“I think that was the lowest point really because there was genuine concerns we would lose some of the services. The thing was we (St Christopher’s) just couldn’t take any more cuts without cutting the service pretty drastically.

“And even after the march it (funding) was pretty slow, and was a drip drip effect you could say.”

Knowing his time as the service’s head honcho has reached its climax certainly enabled the father of four to speak more openly and freely about an industry he has spent half a lifetime deeply immersed in.

It’s plainly left an indelible mark on the cordial public representative about the many challenges St Christopher’s as well as Ireland’s mental health sector still face.

“What does concern me when I leave is that now there is a waiting list building up for residential places.

“I am on several national committees and you hear across the country of older parents, maybe one parent with a person of 50-60 years of age being looked after by an 80-year-old mum or dad. I think there is a tsunami coming down the tracks in terms of the lack of facilities particularly for residential places.”

Strong words they may be, but they are ones the Fianna Fáil politician backs up with facts and more than a few monetary figures to boot.

“I believe it’s one of the shames of our society, I do,” he emphatically added.

“And I do get rather annoyed of this being trundled out and some of our politicians do it saying ‘Oh there is €14.2bn being spent on health’.

“Of course there is €1.8bn being spent on disability. And then they often throw in disability and mental health but that’s still one tenth of the overall budget and it’s a shame.”

For all his sobering prophecies, Mr O’Toole is well known for his forward thinking, likeable persona, a trait which has endeared him to many over the past 36 years.

It’s an idiosyncrasy he applied to how his contemporaries and future successors will ultimately judge his term of office.

“My legacy will have - and maybe I shouldn’t say this -  but I hope it will be a very positive one.

“When I came in we had very little by way of services, we were just starting out.

“We had the school and we were really just starting out with the adult services and we kept building from there.

“Now though , it is time to say goodbye.”