Farewell to a much loved Longford singer, storyteller and musician 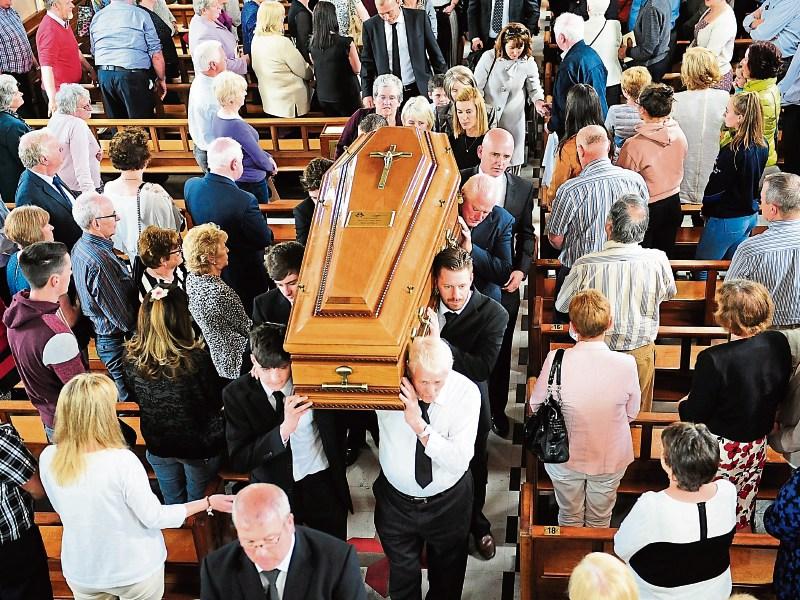 The village of Ballinamuck came to a standstill on Sunday afternoon last as the Funeral Mass of singer and musician Noel Cassidy took place in St Patrick's Church.

Hundreds of mourners gathered in the heart of the village to bid a final farewell to a man described as one of the wittiest men in Co Longford.

Symbols depicting Mr Cassidy’s life  that were brought to the altar during the Mass included a family photograph, Noel’s guitar, his doc martin boots, three football jerseys - one for Fr Manning Gaels, the second for Kerry and the third for Longford -  and a Claddagh Ring that was given to him by his late mother Molly.

Chief celebrant, Fr Ber Hogan said everyone had their own particular story to tell when it came to the popular and much loved north Longford singer.

“Today we are here to celebrate Noel’s life; his music and his numerous qualities that endeared him to so many people,” added Fr Hogan.

“Noel’s life was bound up in music and entertainment going as far back as the 1970s with his first band the Wagon Masters.

“His life was mostly about song, music and storytelling.

“Music was his passion and while he had other interests too, none of them were to the same extent as the music.”

The congregation went on to hear that Mr Cassidy loved to farm, had a great interest in machinery and also indulged “in a bit of building”.

“He was a great storyteller with a great sense of wit,” added the priest, before sharing a story with those gathered to bid farewell.

“Years ago before all the rules and regulations came in about cars having to have an MOT done on them, Noel was driving through London when he was stopped by the police.

“He was asked had his car been tested and Noel replied, ‘No, in Ireland we don’t test cars, we test cattle!”

Meanwhile, Mr Cassidy’s close friends, Mick Flavin and Big Tom McBride sang during the Funeral while the singer’s son David paid special tribute to his father whom he described as a “legend”.

“Noel was a very kind and witty man who put a smile on people’s faces,” added David.

“He was a great father and family man too.

“Deep down he was a really big softie - about six weeks ago I had an aneurysm on the brain and the other night after daddy passed away I was checking my emails, something I hadn’t had a chance to do before then.

“That brought tears to my eyes; he was a terrific person; he was always there for the four of us through thick and thin.

“He was a great man to go to if you ever had a difficulty or needed to chat and his presence made our house a home.”

David went on to say that from an early age, his father developed a keen interest in music and football.

“He would get up on a wreck of a bike and cycle to his friend Mick Flavin’s house where they learned how to play a guitar,” he added.

“Noel always said that he had a happy childhood and his cousins, the McNerney’s, would say that he was a very wild young child!

“His first trip to Manchester was in 1966 to visit his brothers who were working there and it was here that he got his first guitar bought for him by his brother Joe.

“He enjoyed his time in Manchester and worked and played hard.

“During his time there he learned to operate a JCB and this was something that he was very proficient at even from a young age.

“He also made many friends there as well.”

The congregation then went on to hear that Mr Cassidy set up a band in 1977 with his friends Peter McNally, Patsy Carthy and Séan McGowan.

The band was called the Wagon Masters and David remembered fondly how is father told him that they often left a gig owing money!

“He always placed great value on the friends he met through his music and he would be delighted to have Mick Flavin here today singing a song.

“Noel always said that Flavin had the best country voice in Ireland, but that he’d never tell him that!

“His big hero back in the day was Big Tom and it is an honour to have Big Tom here today with us; they became great friends.”

Never afraid to chance his arm, the late Mr Cassidy also set up a radio station in the front room of his house.

“It lasted for years,” David continued, “But he shut it down eventually and when I asked why he shut it down, he said, ‘The lack of a licence was instrumental’.”

Mr Cassidy also ran a dancehall in Ballinamuck with his friend Pat Donnelly, and the crowds flocked to the venue during the showband era.

“Noel also had a great love for one man and that was his cousin Francis McNerney, affectionately known as the Bishop,” David continued.

“They were great friends and went on manys the session over the years.

“Noel was a terrific person and all four of us are very proud of him and all that he achieved in life; he was a father, a character, a legend.

“A wise man once said that a man never dies when he has a son - Noel Cassidy you have four.”