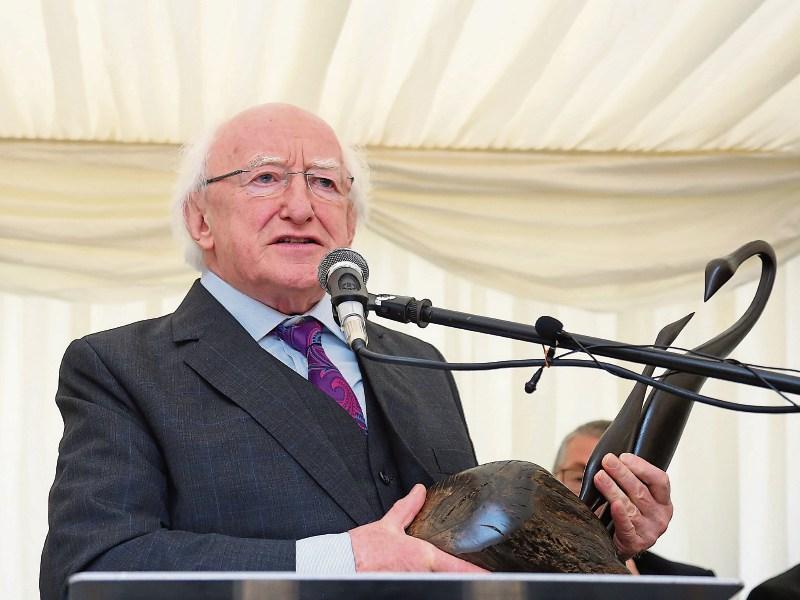 President Michael D Higgins was in Clondra last Saturday morning to unveil a plaque commemorating the 200th anniversary of the Royal Canal.

And despite the heavy downpours and lack of sunshine, hundreds gathered at the local harbour to hear the President pay tribute to the nation’s heritage.

“I am delighted to be here with you all today to join in this 200th celebration of the Royal Canal,” he said.

“I want to thank Waterways Ireland for all that they are doing and indeed for extending an invitation to me.

“The Royal Canal Amenity Group is a group who were very early initiators of having the importance of the Royal Canal appreciated.”

Uachtarán na hÉireann then went on to recall the many efforts that were made by various people over the years to get the Royal Canal and its wonderful infrastructure restored.

“For a long time people did not realise what a fantastic natural resource they had in the canals; and at the same time there were so many possibilities awaiting,” continued President Higgins.

“It is so promising to see all the co-operation that has taken place to get us to where we are today and I want to thank Longford County Council and all the community groups that are here today for all that they have done.”

On the day, the President also spoke about the rich heritage of the nation and his role in helping to bring about the many changes and improvements that have been evident in recent times.

“25 years ago when I was Minister for Arts, Culture and the Gaeltacht, I was involved in the heritage of lots of things,” he smiled, before also pointing to his critics during that time.

“Some people said that I was building an empire at the time,” he recalled.

“And, I told them they were quite right because it was the only way to get attention about things that were being neglected!”

President Higgins said his role as minister then had been an enriching and wonderful experience and he went on to acknowledge the hard work and dedication by many people across the country during that time.

“It was a wonderful experience - the dealings I had in those days with people like Ruth Delaney and others, and the wonderful reception that we received when we came down and met people who were working on improving things like the canal here at Richmond Harbour in County Longford,” he added.

The President then pointed to the tragic events in Manchester last week and spoke of the comparisons between the city’s Ship Canal and the famous Irish Royal Canal whose restoration now sees boats travelling all the way from Dublin to Longford.

“16,000 workers worked on the Manchester Ship Canal and 5,000 of them were Irish - they also helped to build the railways in Great Britain as well,” President Higgins continued.

“There are such wonderful connections between us all, and that is something   we must never forget.”

Uachtarán na hÉireann went on to say that when the Canal was closed in 1961 it was the end of an era, yet wonderful things were on the horizon.

“We have come a long way,” he smiled, before adding that he was pleased to meet with the Irish Famine walkers who passed through Clondra on Saturday while en route to Dublin.

That event, he said was to commemorate those that walked the journey during the famine of 1847.

“Many went to the United States and Canada, while others moved up to Manchester,” he said before pointing to the importance of remembering all those who perished during the Irish Famine years.

“We are all the survivors of the Famine and I think that it is very important that we never forget the significance of the Famine itself.”

“We are honoured,” he told Uachtarán na hÉireann “that you were able to join us here at Richmond Harbour to celebrate the bicentenary of one of our greatest treasures, the Royal Canal.

“The Royal Canal carried 46,000 passengers and 130,000 tons of cargo annually during its peak years in the 1830s, however the introduction of the railways led to its rapid decline.

“Luckily we had a group of brave individuals who worked to save the Canal and bring it back to its former glory.

“We owe a debt of gratitude to many royal canal amenity group members all of whom fought tirelessly to have the Royal Canal restored.”

Entertainment on the day was provided by the Garda Band and members of Longford Pipe Band played President Higgins into Richmond Harbour upon his arrival.

And after all the formalities were completed, the President and invited guests were treated to refreshments and entertainment in a specially erected marquee along the banks of the Royal Canal.

In the early afternoon, Uachtarán na hÉireann then departed Clondra for his next engagement.