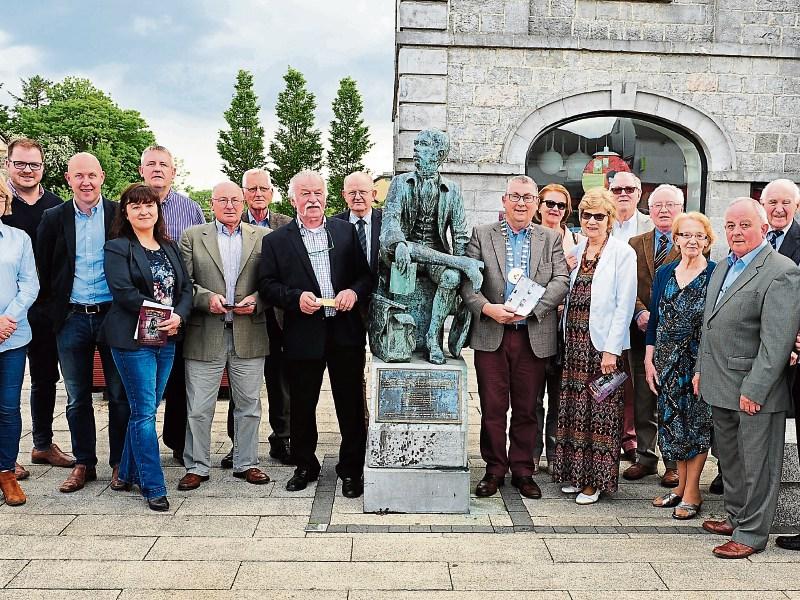 There was much excitement in Ballymahon on Thursday evening, May 19 last, as the 33rd annual Goldsmith International Literary Festival was launched in Ballymahon.

There was much excitement in Ballymahon on Thursday evening, May 19 last, as the 33rd annual Goldsmith International Literary Festival was launched in Ballymahon.

The festival, which is the third longest running festival of its type in Ireland, will take place as usual over the June Bank Holiday weekend.

Founded in 1984, to celebrate the literary genius of Oliver Goldsmith, and to promote Goldsmith Country as a tourist attraction, the festival has explored many aspects of Goldsmith’s life and work.

A huge variety of renowned critics, politicians, poets, journalists and academics have stimulated, informed and amused audiences in that time.

The theme for this year’s festival is ‘Goldsmith and the Irish Experience in London’ and the motto that goes with the theme is ‘Every absurdity has now a champion to defend it’. This line is the preface to ‘The Traveller’, by Oliver Goldsmith.

“The reason we picked that theme is that England or the UK is our nearest neighbour and we have had an interesting relationship with England over the last three or four hundred years,” said Arthur Conlon, a committee member for the festival.

“Goldsmith obviously is an Irish-born writer. But the fact is that he never wrote anything of note while in Ireland. And, like many Irish writers, he moved to England and wrote English-based literature for an English audience.

“So, while we claim him as Irish, we have to accept that he operated from England.”

Oliver Goldsmith lived almost in London for almost half of his life and wrote all of his published works while he was there.

The festival this year will explore the social, political and physical world of London in the late 18th century and use that to put Goldsmith’s works in context. It will also explore the effect that being Irish had on the writer while he was in England.

“In 2017, the nature of our relationship with Britain has never been more in focus. And since Goldsmith’s time I suppose the English have always had a very uncomfortable relationship with Europe,” said Arthur, referring to Brexit.

“Our neighbour has always had a massive influence on us and we’ve always had a relationship closer than we care to admit: we support english soccer teams; their popular culture is our popular culture. And a countless number of Irish people have worked and continued to work there.

“Yet Irish people still continue often to highlight the differences between Ireland and England rather than the similarities.”

This year’s festival will kick off on Friday June 2 in the Rustic Inn, Abbeyshrule, where CEO of Longford County Council Paddy Mahon will officially open proceedings.

What will follow is a jam-packed programme of events, which will include guest speakers, musical entertainment, a barbeque in the Three Jolly Pigeons,  poetry readings and  much more.