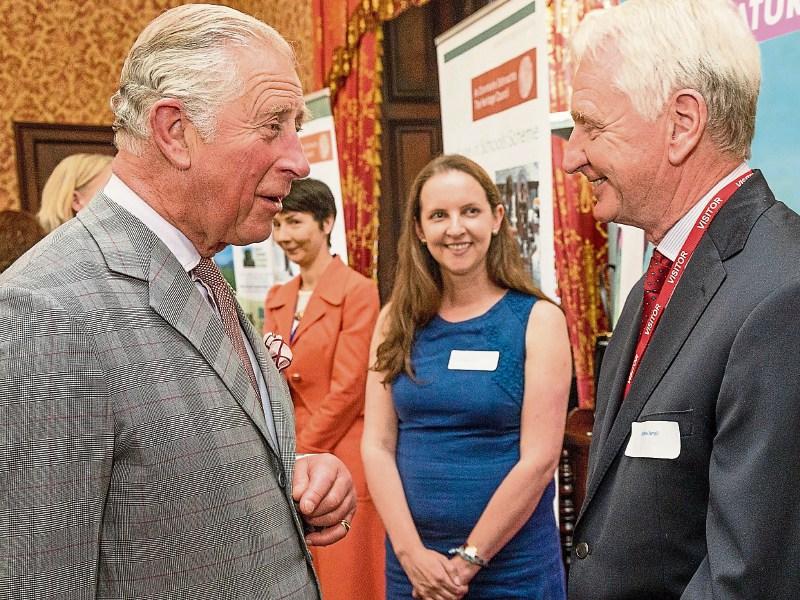 Longford's Heritage Hero, Matt Farrell, was among a gathering of only 200 people in Kilkenny Castle last week when the Prince of Wales and his wife, the Duchess of Cornwall, paid a visit to the city as part of their trip to Ireland.

Prince Charles and his wife, Camilla were introduced to a number of VIPs from the world of sports, politics, business, clergy and local interests, and Matt Farrell was among these.

Matt said it was a “great honour” for him, for Edgeworthstown and for Longford in general to be selected to attend the event on Thursday May 22 last.

Prior to his meeting, he said he would be telling the prince about Longford if he got the opportunity, and he certainly didn't disappoint.

“It went brilliantly. He gave us lots of time and was very interested in what we were doing in Longford and in Edgeworthstown,” Matt told the Longford Leader after his meeting with the prince.

“I told him all about the Maria Edgeworth Festival and that his predecessor, George IV, commented on one of Maria Edgeworth’s books,” he said, referring to the Literary Festival which had taken place the weekend previous in Maria Edgeworth's honour.

“He asked me to send him a copy of the book and I will send him one.”

In fact, the pair had a lengthy conversation about Longford and Ireland's heritage - something that greatly interested the prince.

“The prince was very interested in and very supportive of the work that we're doing in Longford and in Ireland in general,” said Matt.

“He said that he admired the amount of voluntary work that is done in Ireland - and not just in heritage, but in all fields.”

In March, Matt was honoured as Ireland’s Heritage Hero in recognition of his work over the last 20 years in promoting the legacy of Maria Edgeworth and her family in the 1700s and 1800s in County Longford.

He said he was surprised and honoured when he received the invitation to attend Thursday morning's event.

“The invitation was sent by the Heritage Council of Ireland in recognition of the work that we're doing in Edgeworthstown and in Longford,” said Matt.

“It’s very important that the work we’re doing in Edgeworthstown and in Longford was recognised. It's all very good. It's all positive for Longford,” he added.

Matt Farrell is very proud of the work that is done to promote Longford and Edgeworthstown across the country and the world, so getting the chance to discuss that with someone like the Prince of Wales was an honour.

“The Edgeworth Heritage is well worth a visit if people are organising a group outing,” he said, forever passionate about promoting Edgeworthstown.

“Just on Friday last we welcomed a group from Landevant in  France and next week we have a bus load from the Jane Austen Literary Society of Australia. The tour should also be of great interest to school trips.”

The Prince and the Duchess of Cornwall were greeted on Thursday morning by Minister of State Sean Canney and the Mayor of Kilkenny Patrick O'Neill on their arrival.

They were then treated to a bit of hurling with Kilkenny's hurling royalty, former All-star 'King' Henry Shefflin and manager Brian Cody.

Soon, he was hitting a sliotar into the back of the net and enjoying cheers from the crowds gathered to watch.

On his visit, Prince Charles said he had always wanted to visit Kilkenny, and hopes to visit every other county in Ireland at some stage. And with all the chat about Maria Edgeoworth and Longford's heritage, thanks to Heritage Hero Matt Farrell, Longford will most likely be high on his list.