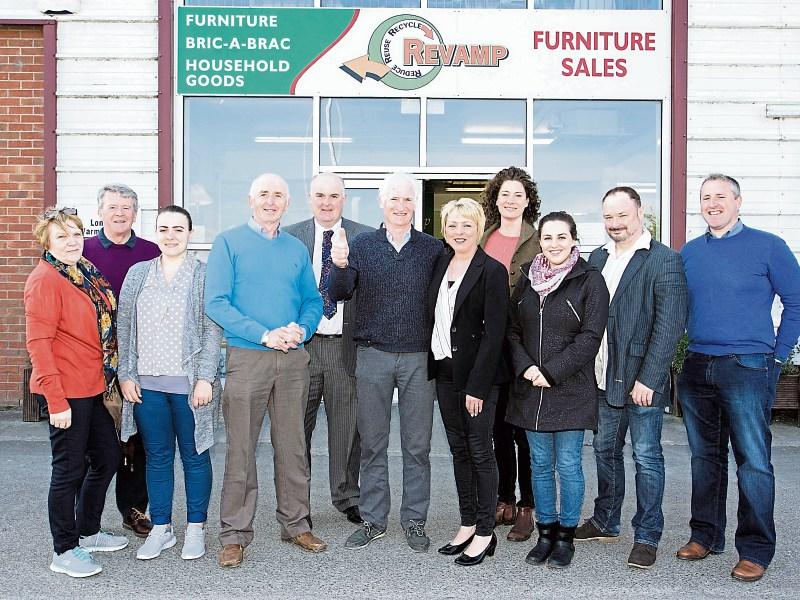 A pioneering Longford furniture recycling business could be in line to share a major cash windfall thanks to a major local community run awards initiative.

Revamp has long been regarded as one of this county's most understated success stories.

Located towards the rear of Longford's Mastertech Business Park, the organisation has amassed somewhat of an unrivalled reputation for its ability to reuse and restore dilapidated furniture.

Perhaps more tellingly has been Revamp's intertwined associated with Longford Employment, Development and Information Centre (EDI) in order to meet the needs of the unemployed and those hoping to return to the local workforce.

A large slice of that diligent behind the scenes work was rewarded this  week when judges from a leading commuity and provincial newspaper backed awards initiative rolled into town to critique the store for themselves.

Among them was celebrity environmentalist Duncan Stewart, chairperson of 'Get Involved'- a local community initiative developed by NNI Local & Regional and the Regional Newspapers and Printers Association of Ireland (RNPAI).

Through Get Involved local newspapers lead and drive voluntary projects with the aim of enhancing pride within local communities all over Ireland.

At a local level that focus was very much concentrated on Revamp this week on foot of the project's shortlisting last December.

Shortly after a brief photocall outside the store this week, Mr Stewart said the main thrust of the awards was through encouraging communities to come together to preserve the best aspects of their local areas while also protecting their environment and  creating local jobs.

“Our plan is to have co-operatives in every town and village in Ireland,” said the well spoken  TV personality.

“You could have ten in Longford, be that sustainable transport, retrofitting, that kind of thing.”

The well respected broadcaster didn't require a detailed briefing in relation to the merits behind Longford's 2017 Get Involved inductee either.

“I was here at the launch of it (Revamp) back in 2005 and I lknow all about the good work that has gone on here,” he continued as the rest of the judging panel made their way inside.

Mr Stewart said the  environmental, social and economic benefits exhibited by Revamp in recycling unwanted household furniture for the disadvantaged were immense.

“When you think about how  so much could have been just left on landfill sites and the emissions that go with that, it really is a win win all the way,” he added.

“We are not for profit and anything we do get goes  towards keeping the centre going,” he told those watching on.

The deep seated ties Revamp enjoys with the likes of other voluntary run associations such as  St Vincent de Paul and Lus Ne Greine in Granard were likewise spelled out.

All this while providing a valuable learning backdrop to individuals who wish to enhance their employability attributes through training and volunteering opportunities.

“We get calls from all over Ireland because there really is nobody like us around,” added Tom.

And it’s precisely that distinctiveness which might just win over the judges ahead of tomorrow’s awards ceremony at Dublin’s Crowne Plaza Hotel.