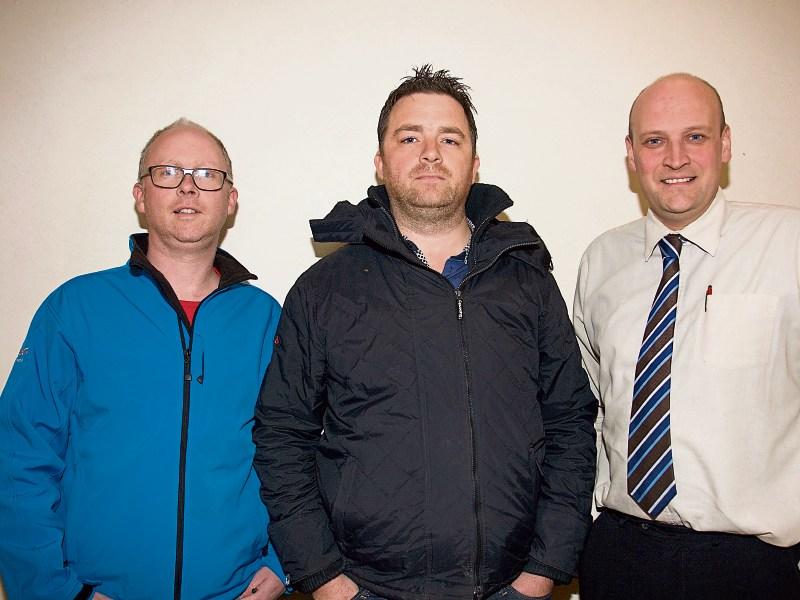 A public meeting was held on Thursday April 27 last to discuss the implications the construction of the Derryadd wind farm will have on the local area.

Around 70 local residents attended the meeting, which was held in Lanesboro, to air their concerns about Bord na Móna’s proposal to erect 28 wind turbines on the bogland at Derryadd.

Also in attendance were local councillors, Mark Casey and Gerard Farrell, who showed their support for those who will be affected by the wind farm.

“People weren’t happy with Bord na Móna,” he added, pointing out that of the questions put to Bord na Móna about the wind farm, 17 of them are still unanswered.

A community forum group has been meeting with Bord na Móna for some time in an effort to express the concerns of the local residents, but with 17 questions still unanswered, they feel Bord na Móna is refusing to listen to them.

In an attempt to find a solution to the problem, Cllr Casey is proposing a motion on setback distances, which is due to be heard at the next Longford County Council meeting.

“My proposal is on what happened in Donegal. The council in Donegal is in the process of changing their development plan so that the windmills have to be 10 times their own height away from houses,” he said.

“So if it’s a small one, it won’t be as bad, but a large one would have to be far away from houses. This would ensure that there are no adverse effects on the residents and it would be a fair compromise.

“I think the majority of people in the room thought that was a very practical approach and a number of colleagues are in agreement.”

The meeting also dealt with the effects that the wind farm could have on tourism in the area. A presentation was given by the Golden Eagle Trust, suggesting that the area would serve well as a wetlands wilderness park and a tourist asset instead.

“No-one in the history of mankind has ever done a tour to see a wind farm. They go to see wetlands and heritage sites. These wind turbines are bringing nothing to the local economy,” said Cllr Casey, adding that the Wetland Wilderness idea is “a fabulous idea”.

“There’s already a marvellous wetlands group at Corlea Bog and they’re putting in walkways and doing a lot to protect nature.”

Sue Moles from the National Parks and Wildlife Service also attended the meeting and said that her organisation has no opinion as of yet on the ecological impact of the proposed wind farm.

However, she said, the role of the NPWS will come when the ecological impact is presented as part of the planning process.

She also added that the locals could get involved by monitoring bird movements and other wildlife in the area and gather information on same.

“There’s a whole ecosystem here that we have to worry about and we don’t know enough about it, so we don’t  know what’s going to happen. We have to be careful what we do,” said Cllr Casey.

“But put it this way: an awful lot more people will come to look at wetlands than a wind farm. We have to be serious about this and look after our local tourism.

“Enough is enough. The people of Longford have been very good to Bord na Móna for years. It’s time for Bord na Móna to listen.”

In conclusion, the meeting agreed that the opposition group will seek the support of politicians in the area, while continuing their regular meetings with Bord na Móna.

The planning application for Derryadd wind farm is due to be lodged with An Bord Pleanála by the end of June.