Cycle Against Suicide comes to Longford 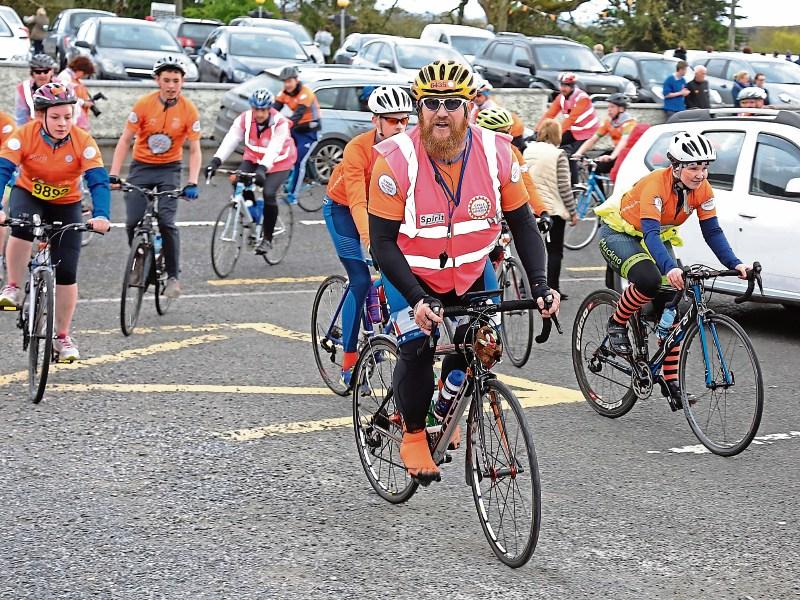 The towns of Granard and Lanesboro were a sea of orange last week as communities welcomed more than 200 cyclists to Longford as part of the Cycle Against Suicide.

The Cycle launched on Sunday April 23 and made its way up to Belfast, before making the journey towards Castleblayney and then Longford.

Large crowds turned out on Thursday as Granard welcomed the group of cyclists to the town, for the occasion and the Main Street was adorned with orange flags and posters.

“Granard was amazing. I’m running out of words to express the intense emotion I feel with the students we connect with,” said Colm Hayes, who has been blogging about the cycle on the Cycle Against Suicide Facebook page since the journey started from Dublin.

“Their exuberance, energy, life, talent, wisdom, kindness - I miss every school when I leave. You are the reason I am here.

“There’s stuff that swims around the outside of these events that annoys me - protocols that paralyse the message… But I only stare into the eyes of the students; I only talk to them; I want them to understand and I think they do…”

Along the route, there are schools that have been chosen as ‘anchor schools’, and Cnoc Mhuire in Granard was one of these.

The students arranged a mental health event, with a number of presentations and videos, as well as entertainment and an exhibition on local health services.

The cyclists spent the night in Granard with host families who were kind enough to offer them a bed for the night, storage for their bicycles, and breakfast the next morning.

“I could have stayed all day in Granard, introducing amazing talent like Rebekah, Grace and Harry and Marine and so many more; I could have acted the eejit all day with them, sat on the floor with them, laughing, messing with them, promising them they’d be okay if they look out for each other and talk a little or talk a lot,” Colm said of the hospitality received in Granard.

On Friday morning, the cyclists were given a great sendoff and a number of locals joined them on the road as they headed for Lanesboro, where Lanesboro Community College was ready to receive them, with a marquee and free ice cream.

At Lanesboro Community College, the students worked equally hard to organise events and exhibitions to raise awareness and spread the message that “it’s okay not to be okay and it’s absolutely okay to ask for help”.

One of the talks was delivered by Joe Dixon who spoke to the students about his own difficulties from his experience of losing his son, Fergus, to suicide, and the depression that followed.

“The room fell silent and tears were shed,” Colm said in his Longford blog post.

“This is what I mean; this is what I really mean. It’s the real stories, the honesty portrayed, the highs and lows, the real world, this actually happened.

“He can show you the footprints behind him, the point where he fell, the moment he stopped believing, the dark alley he cried in.

“Please stop downloading emotions on a statistical Google sheet and telling students you know how they feel. You don’t and they know you’re lying, but Joe Dixon doesn’t lie. He can’t.”

Cyclists took to the road again on Friday afternoon, heading on towards their next stop - Roscommon. The cycle is continuing around Ireland and is expected to finish this Saturday.

Today (Wednesday) will see the group arrive in Limerick, before going on to Fermoy, Thurles, Carlow and finally finishing in Dublin.

There are approximately 800 deaths by suicide in Ireland every year, which means this is an issue that affects local communities all over the country.

The support received from the people of Longford was greatly appreciated by the group of cyclists, and both days were very well attended by politicians too, with Robert Troy, Joe Flaherty, Eugene Murphy, Denis Naughton and Mich Cahill among the many familiar faces in the crowd.

As anchor schools, Lanesboro Community College and Cnoc Mhuire have worked tirelessly to prepare for the visitors and their hard work certainly paid off.

The message of the Cycle Against Suicide is “it’s OK not to feel OK; and it’s absolutely OK to ask for help”, and “Together, shoulder to shoulder, we can break the cycle of suicide in Ireland”.

If you aren’t feeling OK and need support, contact Samaritans for free on 1850 60 90 90 or email jo@samaritans.org.

Or, if you need support but don’t want the number showing up on a shared phone bill, 116 123 is another free helpline that will not be listed on bills.

If you need a response immediately, it’s best to call, and you don’t have to be feeling suicidal to avail of the free support.

If you are in immediate danger and can’t get through to a helpline, dial 999 on a landline or 112 on a mobile.