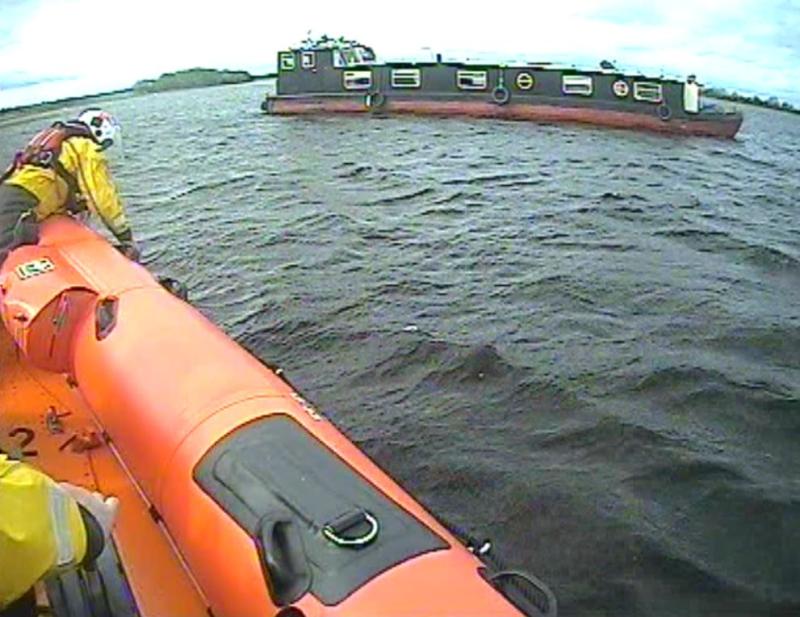 The 56-foot barge with three people on board ran aground on rocks close to Blackwood Point at the northern end of Lough Ree.

Lough Ree RNLI lifeboat crew were alerted by the Coast Guard yesterday morning, April 29, when a 56-foot barge with three people on board ran aground on rocks close to Blackwood Point at the northern end of Lough Ree.

The alarm was raised shortly before 10 am. Shore crew Tony Diskin, Matt Harte, Billy Henshaw and Dennis Buckley responded quickly and got Lough Ree Lifeboat ‘The Eric Rouse’ launched and underway in less than ten minutes, with first responders Kieron Sloyan, Kieran Scullion and Liam Sherringham on board.

A short time later, the lifeboat crew was alongside the casualty vessel, checking that all on board were safe and well.

The weather at the time was dry, with strong wind (Force 5, gusting Force 6) and a rising swell with waves up to a metre high. After checking that the vessel was not taking on water, a tow line was established and the vessel was safely towed to deeper navigable water.

Lifeboat crew member Kieran Scullion remained aboard the barge to check that all systems were operating normally and to assist with navigation on the journey north to Lanesboro quay, accompanied by the lifeboat. Upon arrival at Lanesboro, the crew ensured that the barge was securely berthed before departing the scene.

En route back to the Lifeboat Station, the crew observed a hire vessel straying outside the navigation channel between Clawinch Island and Quaker Island. The crew diverted course to the hire vessel and guided the occupants back to safe water. A lifeboat crew member was invited on board the vessel and spent some time assisting the hire vessel crew in identifying the navigable areas of the lake. The lifeboat crew also advised the occupants of the difficult conditions further south, whereupon the hire vessel decided to return north to Ballyleague Harbour until conditions for crossing the lake improved.

The lifeboat crew then proceeded to the Lifeboat Station, where the shore crew was on hand to recover the lifeboat and ready ‘The Eric Rowse’ for service once again.

Lough Ree RNLI Lifeboat crew member, Liam Sherringham, said "Conditions in the narrower, more sheltered parts of the lake can be deceptively calm compared to the wider, more open sections. We were happy to help both vessels reach safe harbour, before the weather worsened."