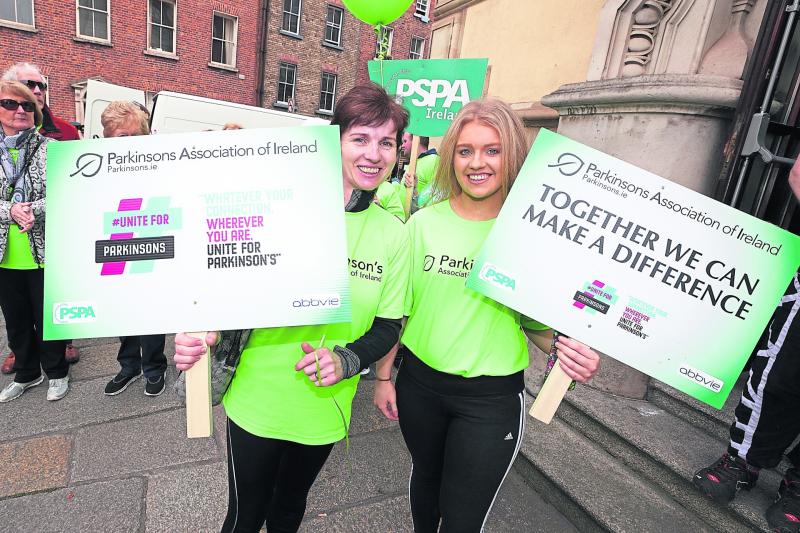 Longford native Adell Dunleavy has become the face of the newly established Longford Parkinson’s Association branch which was set up just last month.

The 47-year-old wife and mother of three who is originally from St Mel’s Road in Longford town was diagnosed with the illness in 2015, at the age of 45.

Parkinson's Disease is a long-term degenerative disorder of the central nervous system that mainly affects the motor system.
The symptoms generally come on slowly over time.

Early in the disease, the most obvious symptoms are shaking, rigidity, slowness of movement, and difficulty with walking.

“I was lucky in many ways because I got a quick diagnosis,” Adell said, before pointing out that she had gone for tests believing she had a brain tumour.

“At that stage I had early onset Parkinson’s and while it came as a bit of a shock I was actually relieved because I thought I might have a brain tumour.”

Now, two years on, the Longford woman, who was coming from a medical appointment when the Leader spoke to her last Thursday, is going through all the motions that can be expected with Parkinson’s Disease.

She has lost two stone in weight and suffers from insomnia.

She has lost her appetite and the mood swings come and go.

Depression and anxiety are also a factor.

“Parkinson’s is not just about the tremor and the shake; that is what most people associate with the disease, but there is so much more to it than that,” she continued, before pointing out that society, in general, associated Parkinson’s with older people, a perception, she believes is very misguided.

“Since my diagnosis, I have met many people in their late teens, 20s and 30s who have been diagnosed as well.

“The key for me is to try and keep positive; I have also decided not to change my medication for now because I know that with each new medication the tremors will come, and I don’t want that; I just don’t want to go down that road just yet.”

Exercise is also an important factor in the management of Parkinson’s, and for Adell boxing and walking are to the fore when it comes to her determination to stay fit and positive.

“I am doing the mini marathon as well and all the money raised will go to the Longford Parkinson’s Association where chairperson, Brenda Shannon; secretary, Al Shannon and treasurer; Mary Connolly are at the helm.

“I fight every day and some days are very difficult especially if you have had no sleep.

“Setting up the Parkinson’s Association branch in Longford was a huge boost to me because I feel that the time has come to create more awareness about the illness and the branch will help all of us to do that.

“And I will work my socks off for it!”

Meanwhile, Adell’s family - husband JJ and children David 24; Shauna 21 and Leah 17 have all been a huge support to her.

“It’s tough for them and with regards to JJ, I know that if he could take this away from me, he would,” the local woman continued.

“The children are very supportive to me and I know that this is very difficult for them.”

Probably one of the most difficult symptoms for Adell is the fatigue.

The Special Needs Assistant at Ballinalee National School says there are some days when the fatigue is just unbearable.

“No medication is going to fix that and that is the reality of the situation,” she added, before admitting that her stubbornness comes in “handy” at times.

“I am just going to have to deal with that aspect of things and keep exercising.

“The exercise increases my energy and sometimes it gives me a second wind, so that helps the fatigue in some ways.”

The most common signs of Parkinson’s Disease are tremors usually seen in one hand or foot, a slowness in movement and an increase in rigidity or stiffness.

There are also two classifications of symptoms – motor and non-motor.

Motor symptoms relate to movement, such as tremor, and non-motor relate to problems such as depression and constipation.

“I’m affected on the right side of my body and I don’t want to give in to that either!

“Sometimes I forget that I have Parkinson’s but then when my energy gives in I know I have it.”

Adell has been living in Killoe now for the past 26 years, but the fact that the new association’s meetings will be held monthly at the Family Centre on St Mel’s Road close to where she grew up, provides great comfort to her.

“I walk and I box regularly,” she added, before pointing out that Parkinson’s Disease will not shorten her lifespan.

“Not only does this type of exercise keep me fit but it also allows me to get all my frustrations out.

“Parkinson’s doesn’t kill anyone, but there will be a lot of challenges ahead for me; limited mobility is something, for example, that I an am going to have to deal with.”

Despite all this, the Longford town native remains hopeful that by the time she reaches 60 years of age, there will be a cure, somewhere out there, for Parkinson’s Disease.

“Medicine is improving all the time,” she added.

12,000 people in Ireland live their lives every day with Parkinson’s Disease.

And, just like Adell Dunleavy they too fight with each day that comes.

“I must take each day as it comes and fight,” said Adell.

“That is just the type of person I am.”