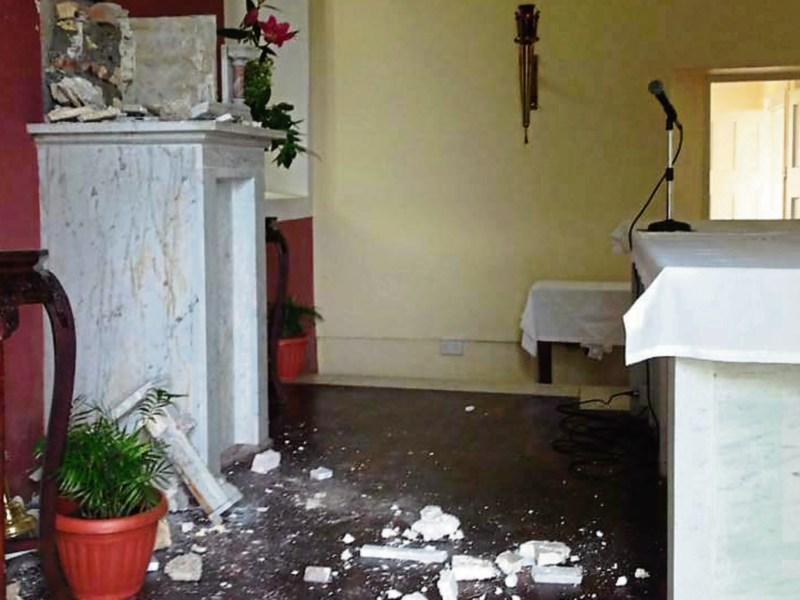 Gardaí have begun an investigation after the tabernacle at St Michael’s Church in Shroid was stolen at the weekend.

The break in, which also saw damage to a window, and the altar, has left a sense of  disgust throughout the entire community.

“I would say without question, it was premeditated,” he confirmed, before pointing out that the tabernacle was encased in marble and couldn’t be just pulled out.

“Whoever did this went in with the necessary tools.”

Meanwhile, the local curate said people were disgusted and disappointed over what happened.

The discovery was made shortly after 7am on Easter Sunday morning and Bishop Francis Duffy, who visited the crime scene, said, at the time, that the incident had been “extremely upsetting” for the parishioners and the clergy in Longford.

“There was extensive damage caused to the sanctuary on the altar,” continued Fr Gilhooly, “And I have to say the Gardaí have been so helpful throughout all of this.

“It is terrible that something like this would happen, but that it would occur during Holy Week is particularly upsetting.”

The local priest said that he was reminded several times over the past few days about the biblical reference to good triumphing over evil.

“There has been wonderful gestures of goodwill and help in the parish over the past few days and we are all very thankful for that,” he added.

On Sunday, the Bishop of Ardagh and Clonmacnois explained that the tabernacle was the centre piece of every Mass and held the sacred Communion hosts.

“It holds the bread that we believe has been transformed into the body of Christ,” Bishop Duffy continued, before pointing out it was what catholics believed, and that was why this act of desecration was so distressing.

“The tabernacle is of great significance to the local parish here.

“We would love to be able to get it back so I appeal for anyone with any information to contact the Gardai.”

Gardaí say they are keeping an “open mind” into the circumstances which led up to the church  being targeted on the outskirts of Longford town.

Vandals smashed through the side window of Shroid’s St Michael’s Church resulting in the theft of a tabernacle as well as significant damage being caused to its altar area.

Gardaí have so far been unable to pinpoint an exact time for when the incident occurred, but believe it took place sometime between 12 midday on April 9 and 9am on Sunday.

Investigators have carried out door to door enquiries in the area and hope the availability of CCTV might  throw up further clues.

The scene itself was cordoned off on Sunday and a technical examination carried out.

As gardai await the outcome of those results, they have issued an a public appeal for information.

Anyone who may have noticed anything untoward in and around the vicinity of St Michael’s Church between 12 midday on April 9 and 9am on Sunday is asked to contact Longford Garda Station at (043) 33 50570.